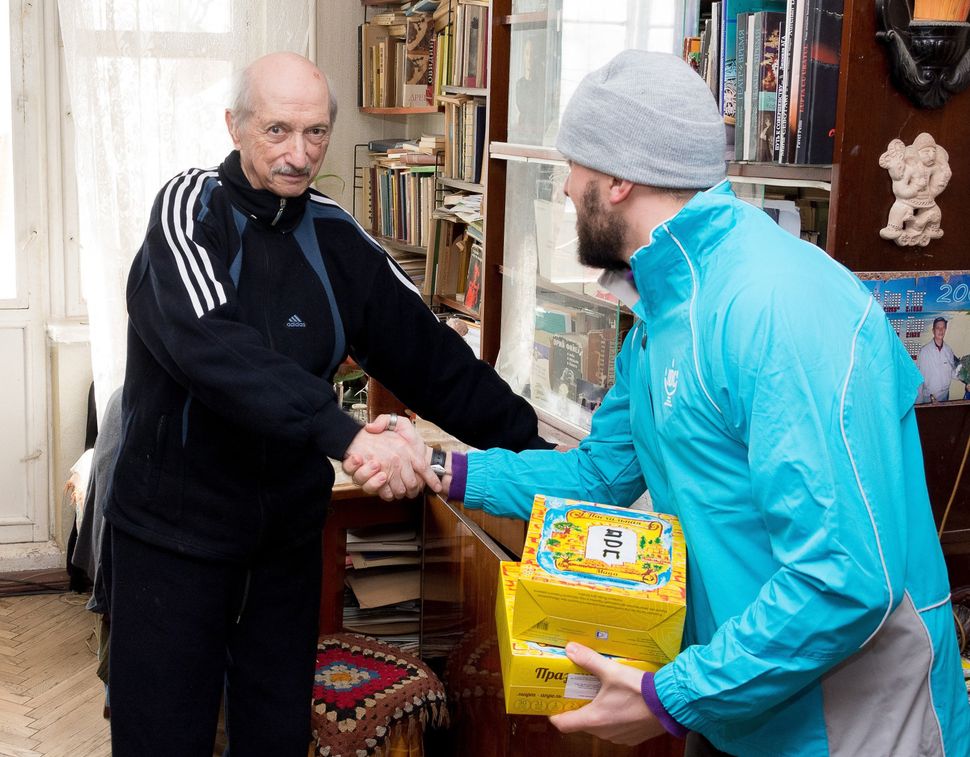 Image by Courtesy of JDC

For elderly Jews in the former Soviet Union, the war might be long over but the battle for daily survival rages on.

“A retired engineer or doctor in Ukraine has a pension of approximately $2 per day, and her counterpart in Russia has a pension of perhaps $5 per day,” according to David Schizer, CEO of the American Jewish Joint Distribution Committee.

Many of their counterparts have flown the coop for warmer climates like Israel, or more economically supportive places like America and Canada. The ones that remain are lonely, forgotten by the world and in need of dire assistance.

And that’s where the American Jewish Joint Distribution Committee comes in. There are 100,000 needy elderly Jews in the former Soviet Union and about 600 Jewish volunteers giving their time, money and energy to help deliver food and companionship. The JDC says that it will be distributing twenty tons of matzah to tens of thousands of elderly Jews living in Ukraine, Belarus, Moldova, and Russia — thanks to funding from the Claims Conference, Jewish Federations, and the IFCJ Food and Medicine Lifeline, JDC’s operational partnership with the International Fellowship of Christians and Jews (IFCJ).

“Passover aid has been a part of our work since our very founding,” Michael Geller, director of communications at the JDC, tells me. The organization’s early work focused on needy Jews in Palestine at the onset of World War I, but now the locus of Jewish poverty has shifted and they’ve turned their attention to a new injustice.

“On Passover, we celebrate the Exodus, something that happened a long time ago, but still defines our lives today,” said JDC CEO David M. Schizer. “In many ways, we here in America are similarly defined by a second exodus. In my case, my grandparents and great-grandparents came to America, while other family members chose to stay in what would become the Soviet Union. That choice made all the difference. So with every bite of food I take at the Seder, I am reminded of Jewish elderly in that part of the world who have so much less than I do. Let’s resolve to do all we can for them, offering them critically-needed aid and the embrace of a global Jewish community that cares.”

The human body treats loneliness like a disease. In fact, science has shown that loneliness can actually kill you. Which is why the JDC not only distributes food, but also offers volunteer-led activities, Seder meals, matzah-baking classes, holiday workshops, and concerts — an attempt to alleviate the pain of aging in a world that seems to have forgotten its elders.

“With strong evidence that friendship does, indeed, help save lives and promote health,” writes Paula Span in the New York Times, “social workers and researchers wish we could pay more attention to its central role.”