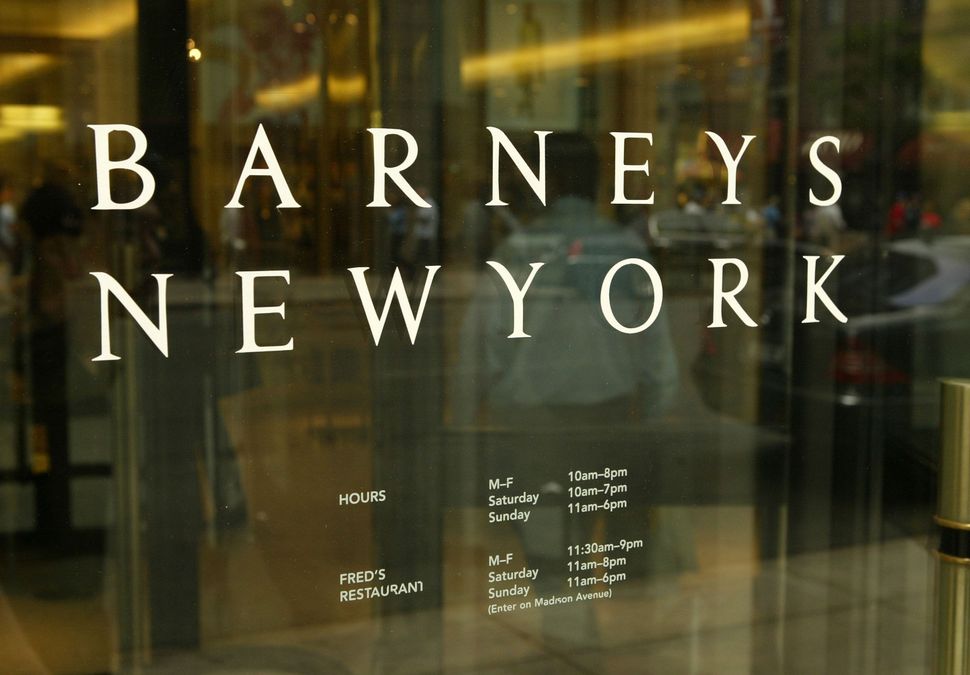 Oh, Barney’s, that venerated respite of window shoppers everywhere. Come to 61st and Madison to rest your eyes on a $40,000 Birkin bag wrapped in lush green alligator skin, to drool over a pair of gravity-defying strappy Christian Louboutin heels not made for human feet to walk in, to admire the grace of a pair of $12,000 Versace sunglasses, black and resplendent with glamour.

And — to eat some kishke.

If you’ve ever been to Barney’s, you’ve heard of Fred’s. Fred’s is a mainstay of Barney’s: The casually elegant bistro that serves robiola with truffle oil and Estelle’s chicken soup (“Grandma’s recipe to cure colds and stay thin,” as per their menu) is now getting into the Friday night game.

From 5 pm to 9pm on Friday, from stuffed cabbage to flanken, from chicken soup with matzo balls to potato latkes with applesauce, the dream of American Jewry is alive and well at Barney’s. We’ve successfully assimilated into the American upper crust, if they’re willing to accommodate our cravings for shtetl fare, now priced for the Barney’s crowd.

Chef Mark Straussman calls it “…a service for my customers. I’m here to care for them. ”

And of course, like everything else in the hallowed streets of NYC, there’s a secret Jewish history there: ‘Fred’s’ got its moniker after (the Jewish) Fred Pressman, the man who took the store from half-off robes to haute couture.

As per his New York Times obituary, “Fred Pressman slowly transformed the store from a salty discount house that sold roast beef sandwiches in its pub to a purveyor of Italian designers with a cafe serving Perrier and light salads. He began to discard the types of suits that his father was prone to unearthing at auctions and bankruptcy sales, peppering the racks instead with then-obscure and top-name designers both, but continued to offer touches like free alterations that gave Barneys its reputation.”

If you head over to Fred’s for an afternoon apertif, inside the pages of your menu, you’ll find a card which declares:

Join Us For Shabbat Dinner