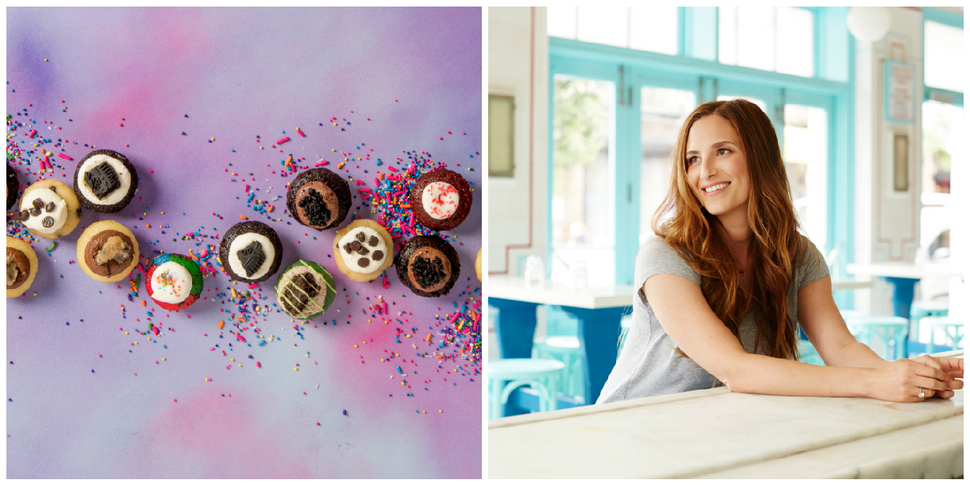 Image by Baked By Melissa

It all started when she was suddenly fired from her job in advertising.

“I was devastated,” says Melissa Ben Ishay, the 34-year old founder of the ‘Baked By Melissa’ cupcake bakery chain. “So I went home and did something that made me happy. I baked four batches of cupcakes. That night, I had 250 cupcakes in my fridge.”

Ben Ishay was 24 at the time. She sent the cupcakes with her friend’s daughter, to her internship at a public relations agency. After a few bites, the agency’s owner invited her in for a meeting — and by the end of the day, she had a business plan.

“We wanted the concept here to be carefree, happy,” she says. “I loved the culture of the 60s and 70s,” she said. “Tie-dye, colorful, represents everything that I stand for.”

Ben Ishay baked out of her apartment for the first seven months — and in November 2008, she moved into a commercial kitchen, part of Cafe Bari in Soho, and started baking there. The owner, a 5th co-owner of the business, sold the bite-size cupcakes out of a booth in the Union Square holiday market. “People loved loved them!” Ben Ishay gushes. “And that’s how we learned we had a great opportunity to open a storefront and sell our product. After that, we opened our first retail location in March 2009, which was a window next to Cafe Bari.” Today, the kosher-certified cupcakes are available in 14 stores and ship across the country.

“I wouldn’t want to go through it again,” she told the Times of Israel. “It was hard. To start a business, it has to be the topmost priority. I did not have a husband. I did not have a child. I worked 16 hours a day, seven days a week.”

Ben Ishay, who is now married to an Israeli and is pregnant with their second child, says her Jewish values inspire her as she builds the business: “Treat others the way you want to be treated, always rise to the occasion and do what’s right, no matter what’s happening around you.”

“I took advantage of every opportunity that came my way,” she says. “Luck is when preparation and opportunity collide.”

Ben Ishay shared her hot cocoa icing recipe with us — beware, it’s just as decadent as her cupcakes.

I could eat this icing for breakfast, lunch, and dinner. It is that good.

1.With a hand mixer or a stand mixer fitted with the whisk attachment, whip the butter on high speed for 1 minute. Add the vanilla and whip just to incorporate.

2.With the mixer on low speed, gradually add the confectioners’ sugar and cocoa mix, 1 cup at a time, until completely incorporated. Scrape down the sides of the bowl between additions.

3.Add the salt and whip on high speed for 3 minutes, until light and fluffy.

Recipe from CAKES BY MELISSA by Melissa Ben-Ishay. Copyright © 2017 by Baked by Melissa. Used with permission by William Morrow/HarperCollins Publishers. All rights reserved.