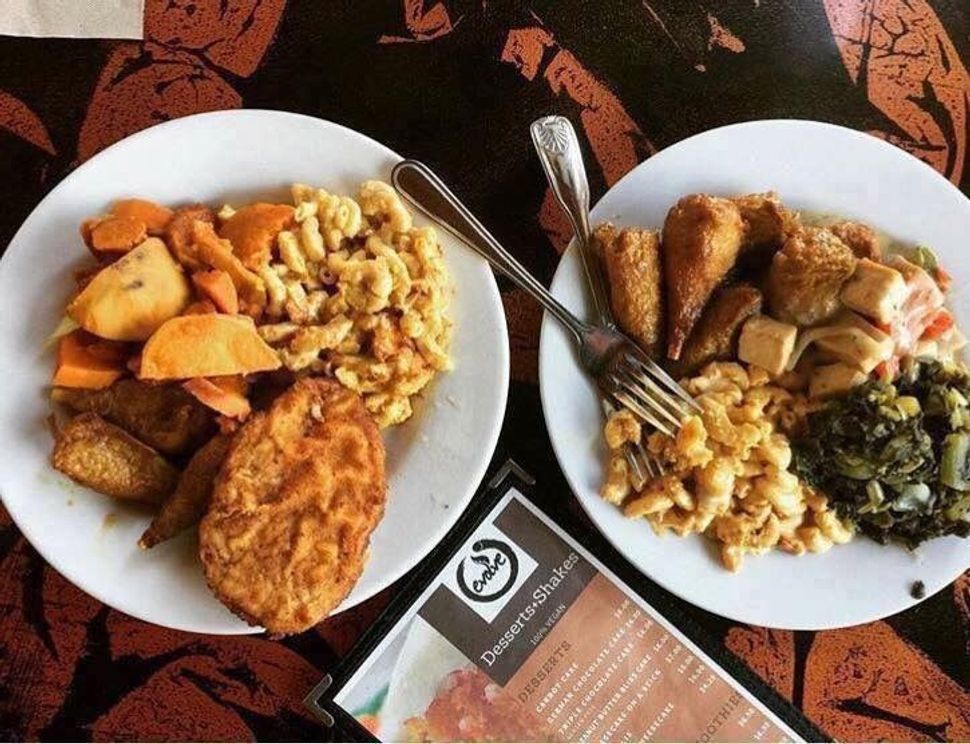 For years, the nation’s capital had only one full-fledged kosher restaurant. But as of this week, that changed.

The clergy at Ohev Shalom-The National Synagogue, a Washington D.C. Modern Orthodox congregation, have given kosher certification to three vegan restaurants in the District (along with two others in the suburbs). Leading the effort is Maharat Ruth Friedman, a member of the synagogue clergy, along with synagogue Rabbi Shmuel Herzfeld.

“We have never seen such a positive response to anything we’ve done in our life,” said Herzfeld. “People are clamoring for more opportunities and ways to eat kosher. Basically, the job of the religious leaders of synagogues is to help our congregants keep Jewish law, so we felt this is something we could do for the community.”

For more than a decade, D.C. had only one kosher restaurant. Eli’s, a meat deli that opened in 2003, shut its doors a decade later. The same owner opened also with a meat-centric menu, at the beginning of the following year.

Along the way, there have been other kosher ventures. Sixth and Rye, a food truck launched by the historic Sixth and I synagogue, ran for several months in 2011. Another kosher food truck, Brooklyn Sandwich Co., opened in 2016 and still parks around town. Nosh, a kosher deli option at George Washington University, closed in 2012. Soupergirl, serving — you guessed it — soup, salad and sides but not entrees, has two locations in the cithttps://oukosher.org/blog/consumer-kosher/playing-with-fire/#fn119808194250cf4c8ccdbf8y. D.C.’s suburbs also boast a selection of kosher restaurants.

But now, the number of kosher restaurants in the District where you can sit down and order a full meal has tripled. Evolve and Vegaritos are within a couple miles of Ohev Shalom in northern D.C. Khepra’s Raw Food Juice Bar is close to the National Mall.

Two more are over the border in Maryland: Sweet and Natural, and Everlasting Life.

“The most significant reason [to become kosher] was because of the number of people requiring or asking whether we were kosher,” said Baruch Ben-Yehudah, who owns Evolve and Everlasting Life, and affiliates as a Hebrew Israelite. “As a vegan and as a restaurant with a reputation for serving healthy food and doing what we can to elevate the eating experience, this is consistent with what we set out to do.”

This is Friedman’s first time heading a kosher certification operation. Beyond the expanded kosher options, she appreciates the new offerings as a longtime vegetarian.

“I think it’s a really interesting process,” said Friedman, who was ordained at Yeshivat Maharat, the first institution to ordain Orthodox women as clergy. “I’ve been a vegetarian for 23 years, and it’s very important to me personally that were making food that is healthy and that doesn’t mistreat animals more available to me.”

Vegan restaurants are a natural fit for kosher certification because they don’t serve — and therefore don’t mix — meat and dairy products. They also do not serve non-kosher dishes like pork and shellfish, or meat and chicken that wasn’t slaughtered under kosher supervision. And because some vegans take their dietary restrictions as seriously as kosher-keeping Jews, the restaurants are already used to being sticklers for the rules.

But Herzfeld said there are still plenty of ways for a vegan restaurant to not be kosher. Evolve had to change its wine menu to only serve kosher-certified wines. Some vegan restaurants also use unkosher varieties of wine or vinegar while cooking. Jewish law also prohibits some foods — a restriction restaurants can circumvent, for example, by having a Jewish person light the pilot light on a stove. And kosher laws demand a closer inspection for bugs in produce than many typical restaurants are used to.

“Just because it’s vegan doesn’t mean there aren’t issues involved in it,” Herzfeld said. “We looked at other restaurants, and some were difficult to deal with.”

The kosher supervisor at Char Bar, who asked to remain anonymous as he is not the restaurant’s manager, told JTA he’s not worried about the increased competition. He said the vegan restaurants largely serve a different market.

“This is a fleishig place,” he said, using the Yiddish word for “meat.” “Vegan is vegan. Fleishig is fleishig. People who want vegan can have vegan. I seriously doubt it would affect Char Bar at all.”

Friedman’s role, however, has led one industry expert to reject the kosher certifications. Rabbi Yosef Wikler, publisher of the monthly , which covers kosher food and cooking practices, objects to Friedman, a woman, being in charge of kosher certification.

Unless she steps down, Wikler plans to remove Herzfeld and Friedman’s local rabbinic organization, the Beltway Vaad, from his annual list of kosher-certifying agencies. Both clergy are members of the Beltway Vaad, but their certification of the vegan restaurants is not occurring under the Vaad’s auspices. (Char Bar is certified by a different authority, the Vaad Harabanim of Greater Washington.)

“A kashrus agency has to abide by traditional Orthodox procedures,” Wikler told JTA, using the Hebrew noun form of the word “kosher.” “[In] the Orthodox world, until today, the only people who certify traditional kosher certification are men rabbis ordained as rabbis, and no one else. Being in charge of a kosher organization, you have to make Jewish legal decisions which only a rabbi is entitled to make.”

“The one that takes care of the kashrut in the kitchen is my wife as well,” he said. Elefant added that he questioned the sustainability of using volunteer, unpaid kosher supervisors — which Friedman and Herzfeld are doing — but stressed that he was not commenting on the kosher certification itself.

Friedman and her colleagues have already had to contend with challenges to their qualifications: The Orthodox Union and Rabbinical Council of America, two large umbrella Orthodox groups, both issued bans on Orthodox women clergy in recent years. But she doesn’t focus on the criticism.

And she and Herzfeld both emphasized that they are doing this as a service to their congregants and local community. If someone doesn’t want to eat at the restaurants, they said, they don’t have to.

“These are not the types of things that bother me,” Friedman said. “Ultimately, folks are going to choose whether they want to rely on it.”