Does Your Jewish Dad Smoke Weed? 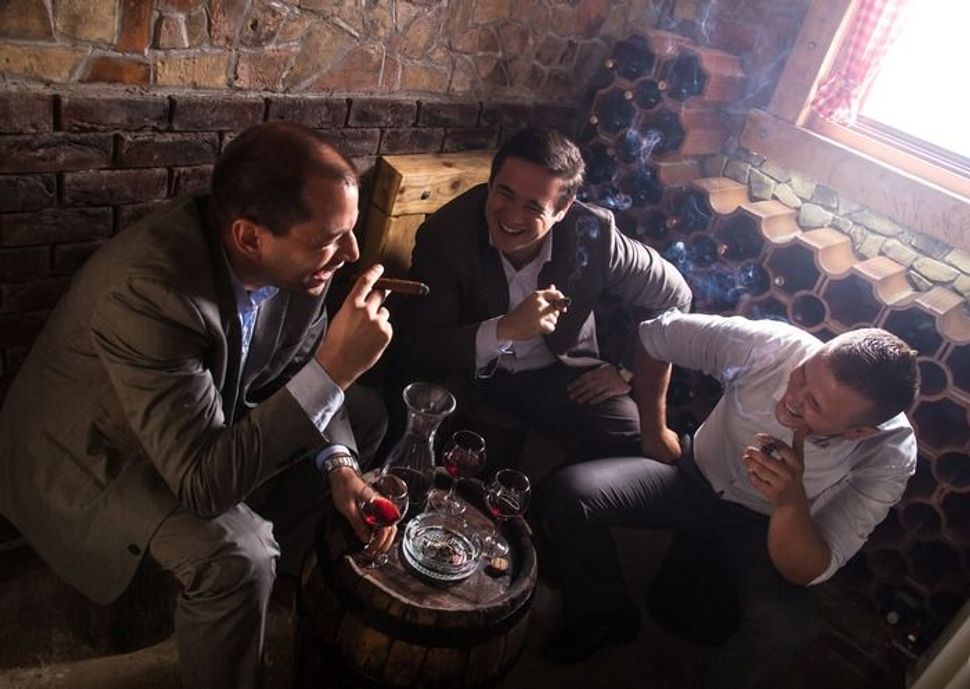 Under the condition of anonymity, I conducted some brief, semi-formal interviews with these Jewish dads as they came to purchase their monthly fixes. They all had one thing in common – they were all Jewish fathers and they all found a respite in the sweet musky, Axe-like scent of marijuana.

How much money does he spend a month on weed?

Do most Jews his age like a quick toke every now and then?

“Oh, more than every now and then,” Max is quick to assure me.

But don’t let that fool you. Max is on the fast track towards making partner at the bank he works at, he’s got a live in girlfriend (“also Jewish!”) and he goes out to eat at the chillest places. In short, he’s the weed-smoking Jewish preppy Prince Charming of your dreams.

And he isn’t alone.

How many Jews smoke weed? Hard to say. But if you’re embarrassed because your father is a middle-aged businessman that is a little too proud of his predilection for marijuana, know you’re not alone. Everyone’s Jewish dads seem to be high 25% of the time,

Ever since the ’60s, when the Jews over at Hebrew University discovered that THC was the active ingredient in marijuana, Jewish dates have been sliding on their Mary-Js and heading to synagogue.

“Yeahhh,” Michael told me, age 43, while taking a long inhale. “I get high sometimes.”

Michael is the sole moneymaker for his family, paying the bills his second wife racks up. To deal with the stress, he takes to the ganja. “It’s very easy to get weed in New York,” he says. “I’d get it delivered but my wife’s around.”

Does she not know about your smoking habit?

Avi is a lonely, gay middle-aged dad. “Did you read that article?” he asks me. “About the lonely gay men? I meet people here. Smoking is a shared thing.”

And does smoking make you feel less alone?

“It’s a distraction, for sure,” he says. “I’ve been doing it since I was a teen. I stopped for a while and then I started again last year.”

Ari was the only weed-smoking Hasid I spoke to, but he assures me there are many more just like him. “I’m a good boy,” he tells me. “Weed is the only thing I partake in. And it’s kosher!”

Ari’s been smoking for nine years, since before his eldest children was born. Five children later, it’s a cheap way to take off the weight of his shtreimel for a couple minutes.

Jason’s wife is pregnant and he’s here getting high and dreading his impending fatherhood. “It’s like I knew I was going to be a dad but I didn’t really know,” he says vaguely.

Are you anxious about it?

Do you see yourself continuing to smoke weed after your child is born?

Jason thinks hard for a few minutes. He hasn’t answered my question of how old he is and I’m beginning to suspect that he won’t. “Why not,” he says finally.

What is it about marijuana that appeals to a certain type of straitlaced man, an aging Jewish frat brother of sorts, the kind of man with a steady job who pays the bills? Why have responsible Jewish men chosen marijuana as their drug of choice? Is there any way of interpreting how common this phenomenon really is? Is your Jewish dad in the handicapped bathroom in his workplace right now, taking a well deserved inhale of that joint that’s been sitting in back pocket? Very likely.

Shira Feder is a writer at the Forward. Jewish dads are invited to speak with her about their weed-smoking ways at feder@forward.com

Does Your Jewish Dad Smoke Weed?