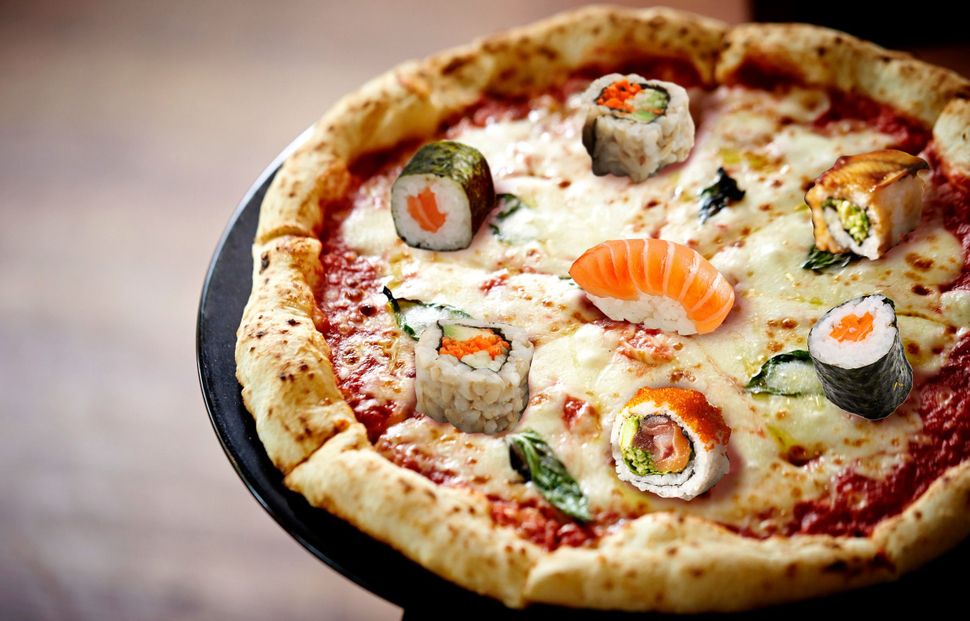 Among the potpourri of traditional Jewish dishes, from cholent to borscht to schnitzel to schug — somehow, American Orthodox Jews have embraced sushi as a traditional food, too. Instead of crab, there’s faux crab. Instead of seafood, there’s salmon.

80 to 90 percent of the city’s 100 kosher restaurants now serve sushi, Rabbi Moshe Elefant, chief operating officer of the kosher division of the Orthodox Union, told the New York Times, in an article about the inexplicable popularity of the Japanese street food.

For most non-Orthodox Jews, food is important because it carries cultural significance. Alone with rituals, it signifies Jewish connection without carrying the baggage of religious significance.

But for the highly Orthodox, who live their lives attuned to spirituality, praying three times a day, dressing modestly and engaging in Torah study and eating at strictly kosher restaurants, food being ‘Jewish’ may be less important. They live their lives Jewishly; they don’t need a bagel and lox to remind them who they are. Thus, I believe, the pivot from corned beef and kugel to sushi and tempura rolls.

So why is sushi so big in Orthodox circles?

Could it be because sushi is either pareve or dairy, thereby circumventing the complications of kashering meat, while offering people another option and the restaurant another way to bring in cash? Is it because it’s relatively cheap and easy to make — with little extra kitchen space required? Is the Kosherification of sushi a form of cultural appropriation? Or is it a democratization of food, where sushi is available for all?

“We served sushi with pizza from the very beginning,” said Esther (surname withheld) from New York’s Bravo Kosher Pizza. “People seem to like it, I don’t know what it is. I mean, why pasta? Why a tuna sandwich? You could ask.”

So is it this Orthodox ken for raw fish that buys a love of sushi?

He chose to serve sushi with pizza in order to appeal to families, offering pizza for children and one sushi for adults. “We sell a bit more sushi than pizza,” Wald tells me.

“Well, sushi has gotten a lot more popular [in the kosher community] over the last five years,” he tells me.

About a year ago, Pizza Palace Cafe LLC added a sushi bar to the store. People seem to order pizza for the most part. As a manager for the store told me, “when 4 people go out for pizza at least one of them may want to be in the group and not feel guilty breaking their diet and order sushi.”

Toby Dahari, owner of Elite Pizza, which has been in business for over 17 years, told me that the sushi bar was added two years in. “We noticed that some customers were asking for lighter food to eat. It gave them more options to choose from and allowed us to fulfill their needs better.”

Dahari believes that sushi is popular because in the Orthodox community because of the health benefits it offers. “I believe that sushi has gained more popularity within the Orthodox community because of the recent trends to eat healthier…Eating fish is known to have positive health benefits for the body and eating sushi can provide those advantages,” Dahari told me.

“Orthodox people go nuts for sushi,” a kosher store manager who spoke anonymously told me. “They just love it. It feels exotic to them.”