Top 7 Foods To Bring To A Shiva House 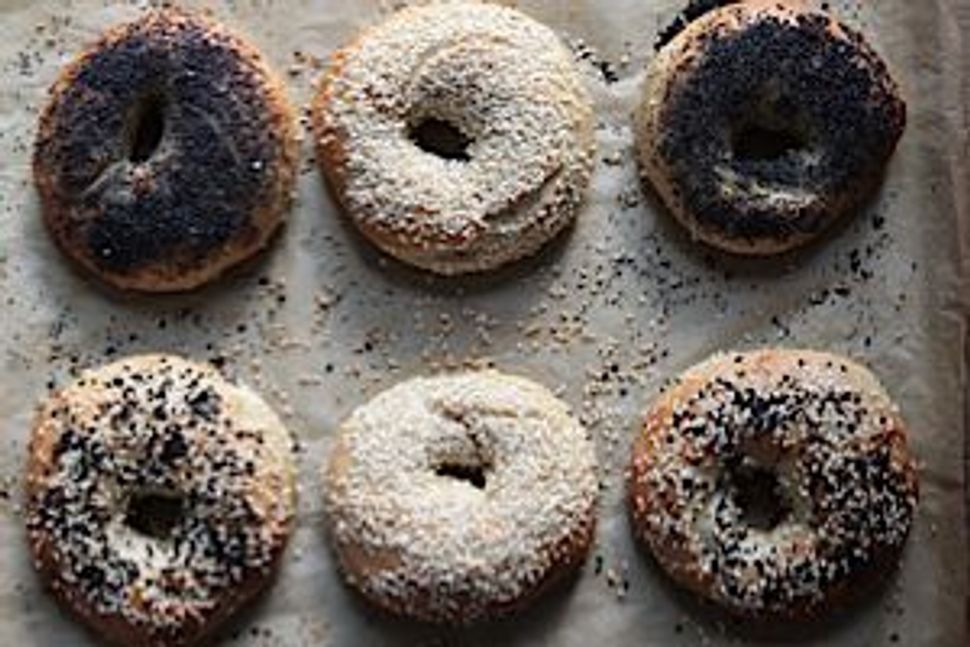 The perfect bagel awaits you ? in your kitchen. Image by Eric Moran/Food52 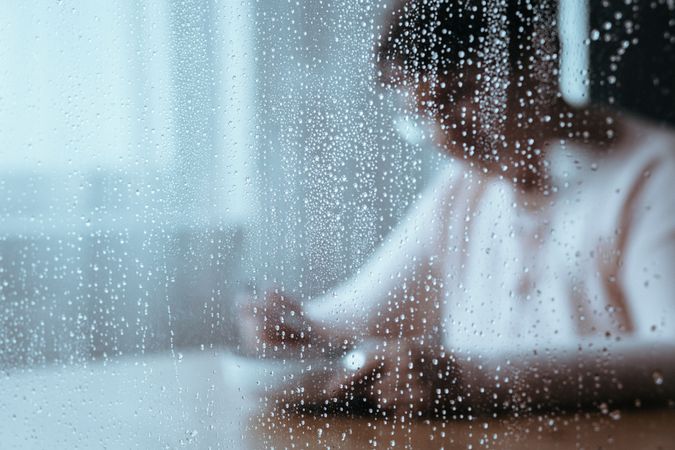 It’s not always easy to know what to say to someone in mourning. A lot of times people can make the mistake of saying ‘it was meant to be,’ or ‘at least they didn’t suffer,’ or ‘well, she was pretty old, wasn’t she?’

So instead of putting your foot in your mouth, consider giving your emotional support with something else, much quieter: food. Giving someone food to eat is a way of nourishing them, of giving them one less thing to think about, of saying “I care about you” without having to tread into uncharted emotional territory.

In Judaism, mourners are not allowed to cook for themselves on their first day of mourning. As per the Talmud, “A mourner is forbidden to eat of his own bread on the first day [of mourning]” (Talmud Moed Katan 27b), although we Jews have taken that a step further and made sure that food is prepared for mourners for the entire seven days of mourning, or shiva. On those seven days, the mourners sit on low chairs, surrounded by friends and family who bring towering piles of tuna casserole that will eventually be thrown in the trash to the mourners who may not be up to preparing food for themselves.

Traditionally, Jewish deli platters have been brought to shiva houses, but that’s not the only thing you can bring. What you’re looking for is food that requires absolutely no effort on the part of the mourner. You want dishes that are versatile and durable, that can sit all day in the fridge and reheat gracefully. A mourner who has no appetite during the day may find themselves prowling the kitchen at night. Room temperature dishes that don’t need to be reheated, like egg salad or cut up fruit, are the best for people looking for a bite between visitors.

Make sure to find out whether kosher is something that matters to your hosts before home-cooking something. You don’t want to put them under pressure to eat something they aren’t comfortable with, or having to refuse it.

If you can, coordinate with other friends and family of the mourners to create a schedule for creating and delivering meals for them for the seven days of shiva. It is the community’s job to emotionally and physically nourish mourners during a time when they may not feel up to taking care of themselves.

The seudat havara’ah is the first meal after returning from the burial at the cemetery. It is a private affair, for family alone. If you are providing food for this meal, and are not a member of the immediate family, put aside your ego if you are not asked to join.

Don’t wait for recognition from the mourners. They’ll appreciate you in the future, but now is not the time to admire the complex flavoring of your homemade hummus. Just drop off a hug and a hummus platter and be on your way.

Here us a list of other soul-healing, heart-warming, filling foods you can bring to a shiva house to help ease someone’s pain. 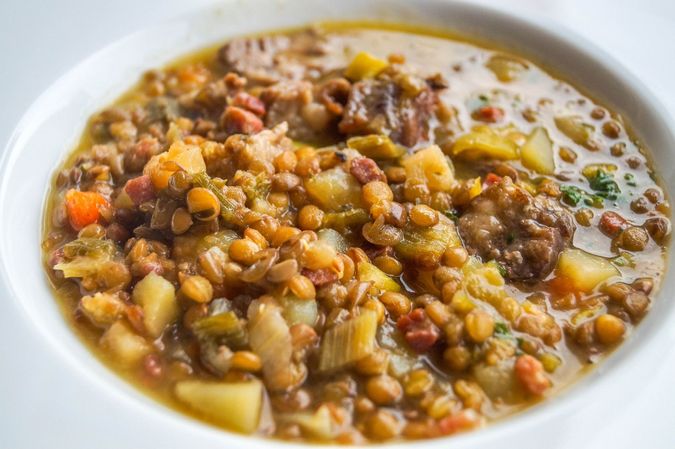 Biblically, this is the food that Jacob makes for Isaac as he mourns his father Abraham’s death, the food that Esau is willing to sell his firstborn birthright for. It is the first mourning food a Jew prepared when he was hurting because of the loss of a loved one. You can continue the tradition by making this lentil soup. which is a hearty, filling way to honor tradition and feed a hungry mourner.

This versatile soup freezes well, making it an excellent choice to bring to a hectic shiva house where meals will be eaten at irregular times. 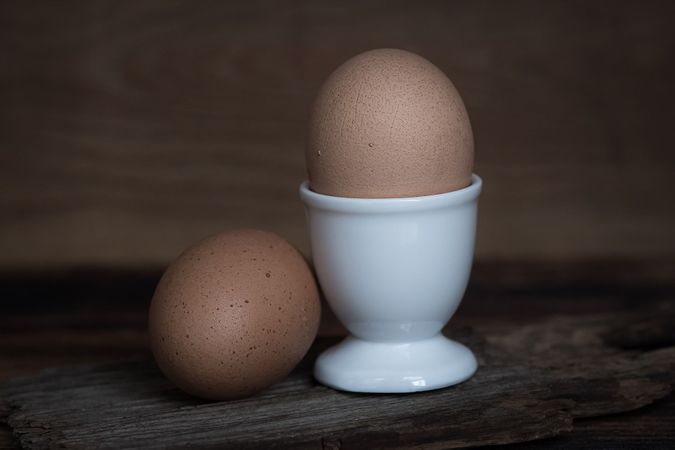 The round shape of these foods represents the cycle of birth, life and death in Judaism. Hard boiled eggs are also excellent because they don’t require any preparation, are a good source of protein, and can be eaten on the go. Eggs are simple, but they can be dressed up. From deviled eggs to poached eggs to scrambled eggs, with a sprinkle of paprika and feta cheese, eggs are a comforting, safe choice, whose roundness echoes the cycle of life.

3. An assortment of bagels 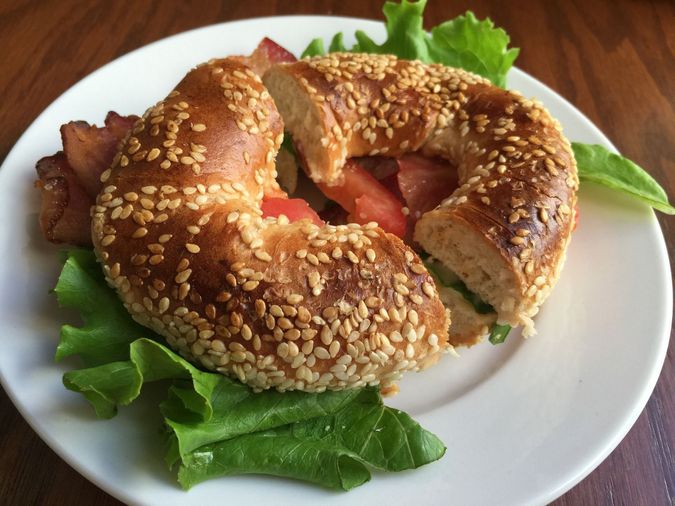 Is there a better way to say I love you and I won’t leave your side than with a pile of freshly-toasted bagels? Make sure you include an assortment of spreads like egg salad, cream cheese and tuna along with your carbohydrates. Bagels are a classic, and they’re also circular, symbolizing the cycle of life, and it’s hard to go wrong with something so many people love. 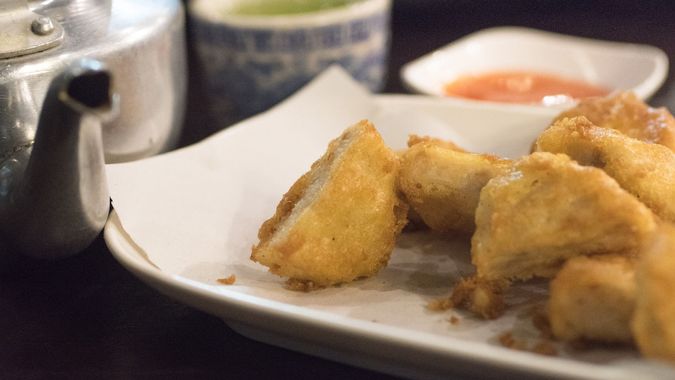 No one wants to bothered with forks at this turbulent time in their lives. Think potato knishes, pastry puffs, egg rolls. Hot foods that will warm cold hearts. Shiva food is comfort food, and for some people, what’s more comforting than the greasy delights of their childhood? There are often kids in shiva houses, whose grief-stricken parents may be overwhelmed at the thought of feeding them. Make it easy on those parents with carbohydrate-loaded foods that kids will flock to. After all, what’s a shiva house without some unhealthy snacks somewhere? 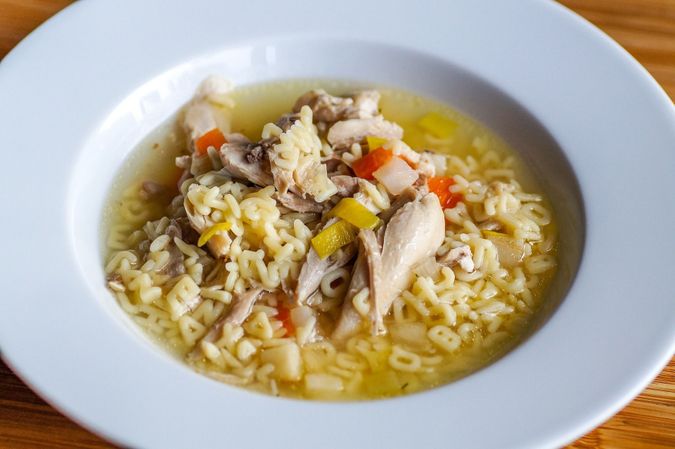 Sitting shiva is chaotic, requiring a ton of emotional labor, as friends and family pour in and out of the house. Often there isn’t time for an entire sit-down meal. Soup is a quick, easy way to keep a person’s energy level up without requiring a ton of preparation.

Chicken soup has been called penicillin for the soul. Shiva food should be simple, familiar food and what’s more familiar to a Jew than chicken soup? 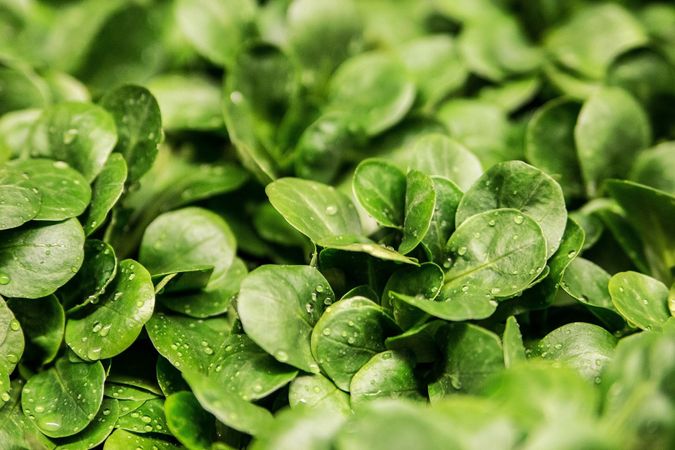 Lots of shiva food is very oily and starchy and fattening. Sometimes a bowl of fresh greens can look a lot more appetizing than a pile of fettucini alfredo that’s been sitting out on the counter all day. Salads can be a light snack, a healthy option, and a good way to serve food outside the major food groups of candy and cakes. Bring dressing on the side, because you don’t know when your food will be eaten and bringing an already dressed salad will mean it gets soggy quicker. 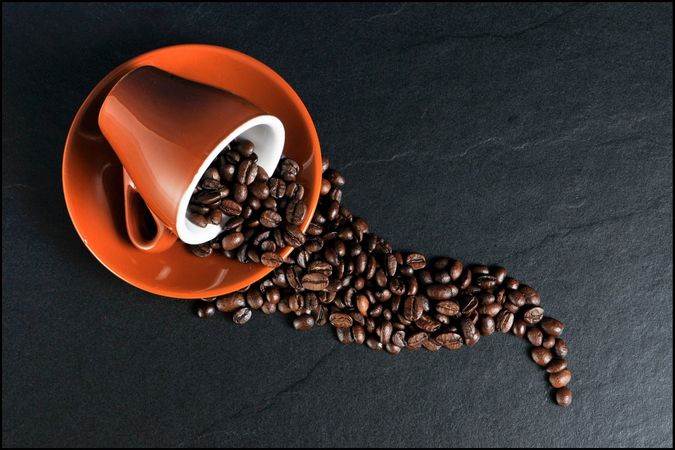 Lots of people I reached out to for the article said the thing they most appreciated receiving was coffee. Instead of the instant coffee most people turn to while sitting shiva, receiving a nice, store-bought cappuccino was a gesture that stayed with them for years. Sitting shiva can be debilitating and exhausting in a way instant coffee just can’t fix. Buy a tray of store-bought coffees and let the mourners know you’re thinking of them.

You can’t fix a broken heart, but you can let people know you care about them, and food is often a shortcut to doing that.

Top 7 Foods To Bring To A Shiva House