Kosher Restaurant Puts On Receipt: ‘Immigrants Cooked Your Food And Served You Today’ 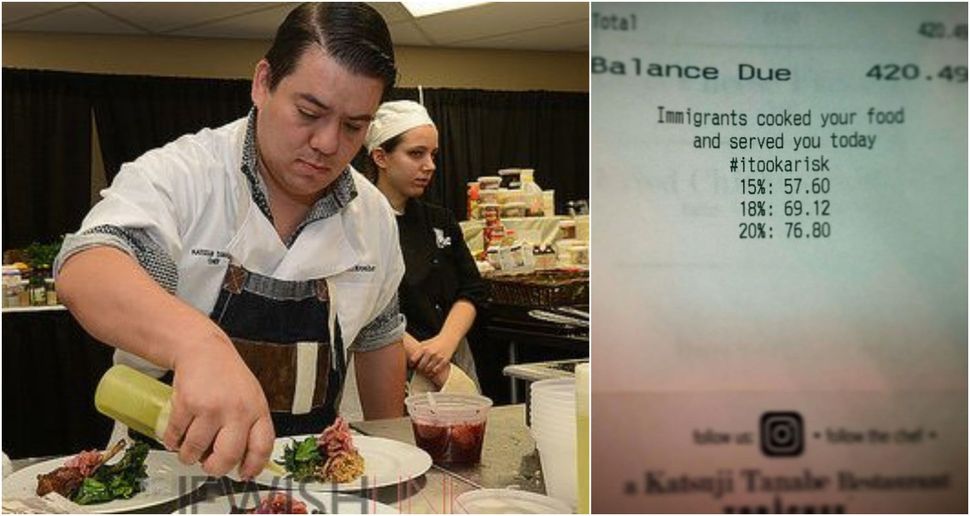 Katsuji Tanabe, the restaurateur, executive chef, and owner of Mexikosher in Manhattan and Flushing, Queens, is now serving up immigrant support at his restaurants. The “Top Chef” alum and Japanese-Mexican immigrant is printing receipts at his establishments that say, “Immigrants cooked your food and served you today #ITookaRisk.”

Tanabe, who also owns three other non-kosher restaurants, including Barrio in downtown Chicago and The Nixon Chops & Whiskey in Whittier, Calif., created these receipts “as a reminder that immigrants are everyone,” he said, in a phone interview. “People forget that we all came from a different country at some time or another.”

The chef himself, who is half-Mexican and half-Japanese, was born and raised in Mexico. He moved to Los Angeles at 18 to enroll in Le Cordon Bleu cooking school, and got his start in kosher cooking at Shiloh’s Steak House in Los Angeles. In 2011, he opened Mexikosher LA, which shuttered in April of 2018. Along with appearing on the Mexico, Boston and All Stars editions of “Top Chef,” he also won “Chopped,” the quick cooking competition on Food Network. On “Top Chef,” Tanabe came up with his life motto, “I Took a Risk,” which is why it also appears on the receipts.

Tanabe said that at his restaurants, he employs first and second-generation immigrants from Israel, Mexico, England, Africa, South America, and Russia. When his servers hand customers their receipts, 80 percent of them don’t even notice the writing. “The rest of the people say it’s pretty cool. There is .5 percent of people that say ‘There is no need to put this on my receipt.’ Some people say that politics should stay out of the restaurant, but my answer is that it’s not about politics.”

Since dining out is such a huge American pastime – more so than going to rallies or the theater, Tanabe said – he wants to provide an outlet where people can discuss the issues of today. “It’s a talking point at the end of the meal, and people either say it’s cool or it’s not right.”

When diners eat at one Tanabe’s restaurants, and are served by members of his staff, they should remember where they came from as well. “I could not care who is in power, whether they are Republicans or Democrats,” said Tanabe. “It has nothing to do with it. It’s about embracing good karma and just doing the right thing, which is to appreciate immigrants.”

Kosher Restaurant Puts On Receipt: ‘Immigrants Cooked Your Food And Served You Today’