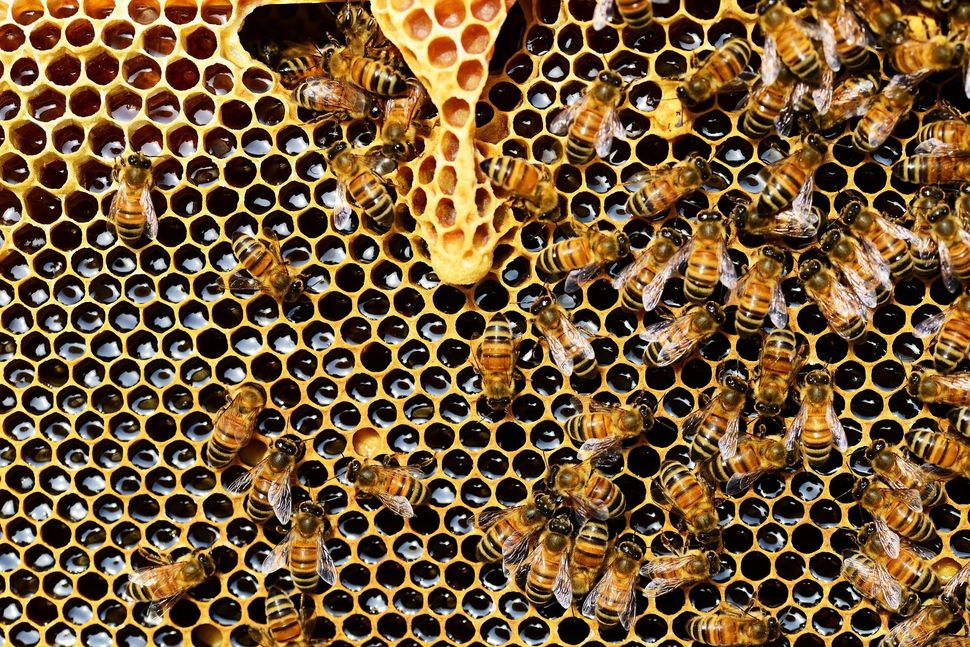 NEW YORK (JTA) — The truth is, there is no commandment in Judaism to dip an apple in honey on Rosh Hashanah. But what would the Jewish New Year be without the custom?

It’s a question that bedevils vegans, many of whom won’t eat honey because it’s an animal product.

So what’s a mock chopped liver/seitan brisket/vegetarian stuffed cabbage kind of Jew to do?

Jeffrey Cohan, the executive director of Jewish Veg, explains all the ways that honey production is problematic. In order to produce as much honey as possible, many honey producers manipulate the bees’ natural living patterns, including clipping the queen’s wings to prevent her from flying away, and replacing the honey produced with sugar water, which animal rights activists say is less nutritious. Some vegans regard the whole process as cruel and exploitative.

“’Tza’ar ba’alei chayim’ is a core Torah mandate, so to start the new year right away by violating tza’ar ba’alei chayim does not get the year off to the best start,” he said, using the Hebrew term for the prohibition against causing unnecessary harm to animals.

One of the more common substitutes is honey made from dates, according to Cohan. Date honey is not only vegetarian but has its roots in the Bible. Dates are one of the seven species of the land of Israel mentioned in the Bible. Scholars say that the description of “a land flowing with milk and honey” actually refers to date honey, not bee honey.

“[B]ecause date syrup is actually in the Torah, it makes the most sense from a Jewish perspective,” Cohan said.

Brian Finkel, the co-founder of a company selling organic date honey, says the product has 25 percent less sugar and a lower glycemic index than bee honey and is a great source of antioxidants.

Finkel, who grew up outside Chicago but moved to Israel in 2013, first tasted date honey while studying at a yeshiva in the Jewish state after finishing high school. Silan, as the product is known there, is a popular ingredient in cooking and baking, and as a dip.

The entrepreneur had a self-described “eureka moment” when he thought to introduce it to American consumers.

Last year, Finkel and his business partner, David Czinn, launched D’Vash Organics. Since then, Finkel said, they have sold hundreds of thousands of bottles of date honey, in stores across the United States and through the company’s website.

The product is produced in a U.S. factory that is not certified kosher, but Finkel said he is looking to produce a kosher version so that observant Jews can have it around the holidays — and year round.

Making the new year sweeter is the whole point of the custom. Some trace it to Nehemiah 8:10, where the Jews of the Second Temple period celebrating what would eventually become Rosh Hashanah are told to “Go your way, eat the fat, and drink the sweet.”

As for the apple, the custom was started among Ashkenazi Jews in medieval Europe, when the apple as we know it had become more accessible due to cultivation, said Jordan Rosenblum, an associate professor at the University of Wisconsin-Madison who studies food and Judaism.

Apples are in season and therefore plentiful in the fall, when the holiday of Rosh Hashanah occurs. In 14th-century Germany, the Jewish sage known as the Maharil described the custom of dipping apples in honey as long established and rich with mystical meaning.

Dates did not grow in Europe, but honey made by bees was available, so that became the topping of choice, said Leah Hochman, an associate professor at the Hebrew Union College-Jewish Institute of Religion who researches religion and food.

“You have all these Diaspora communities that are adapting to their new environments, and over time people used substitutes that had some sort of relationship to the seven species to honor the ever-longed-for return to Zion,” Hochman said.

The custom traveled with European Jews when many of them left for the United States in the 19th century. Many settled in the Northeast, a region where apples grow well.

“They have that tradition, and they come to a place that’s great for apple growing, so that further cements it,” Rosenblum said.

Hochman said that as apples and honey became associated with Rosh Hashanah, the combination gained a symbolic meaning.

“Over the course of time, the tradition became crucially important for understanding our wishes for a new year, that they’re sweet,” she said.

It also helped that bee honey is kosher, even thought the bee itself is not. Rabbis explain that unlike milk from a nonkosher animal, which may not be consumed, bee honey is derived from the nectar of a flower and not from something that’s part of the bee’s body.

The post Why Jews dip apples in honey on Rosh Hashanah — and why vegans say the custom is a problem appeared first on Jewish Telegraphic Agency.