Climate Change Is Affecting Olive Oil Production. Will There Be Another Hanukkah Miracle? 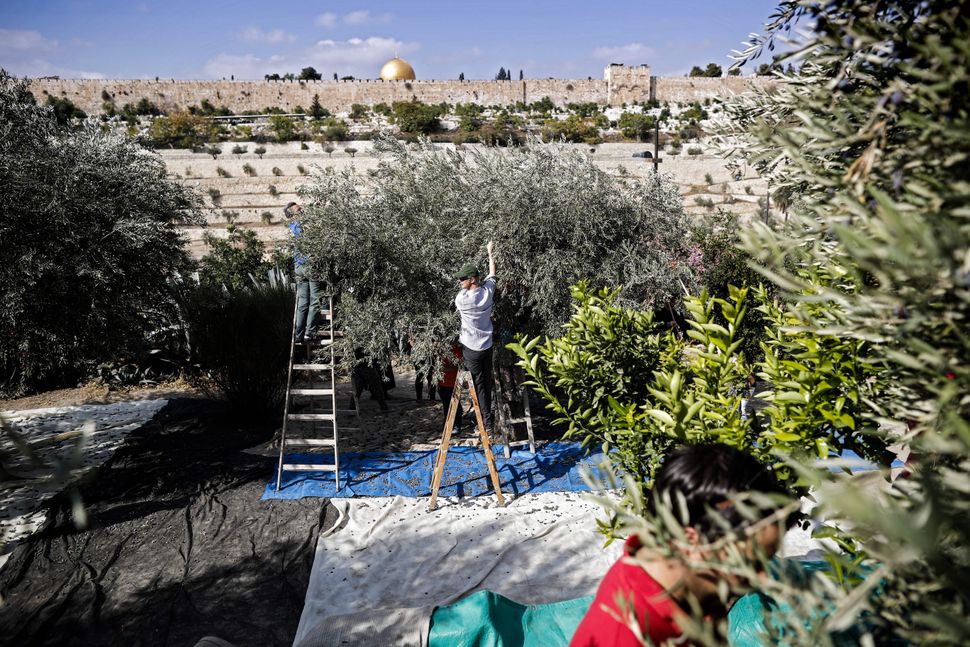 People collect olives on millenium olive trees situated in the Franciscan Hermitage of Gethsemane in the Mount of Olives in front of the Jerusalem’s Old City, on October 21, 2017, with the Dome of the Rock seen in the background. Image by THOMAS COEX/AFP/Getty Images

According to tradition, a small olive oil jar was used to light the menorah in the Second Temple in Jerusalem for eight whole days, after the Jews had successfully risen against their Greek-Syrian oppressors. Even today, many people still light their Hanukkah menorahs with olive oil candles.

It is no coincidence that the tradition of Hanukkah is related to the olive tree. On Hanukkah, the olive harvest ends, and the oil production begins. Olive oil has its origin in the Mediterranean basin some 8,000 years ago and has been a significant part of the local culture for many generations. Throughout the region, olive oil became an essential part of the diet and is mentioned in the Bible as one of the “Seven Species” that Israel has been blessed with.

However, the effects of climate change do not spare the relatively robust and resilient olive tree, causing a decline in the quantity and quality of olive products in Israel and around the world.

The tree that survives when others collapse

The summer of 2017 was exceptionally hot, and July will be remembered in Israel as one of the hottest July months on record, with day temperatures 2.5 Celsius degrees (5 Fahrenheit) above the average. The extreme heat took its toll, and has not only affected man – but the olive trees as well. Israel saw a 17 percent decline in olive oil production in the winter following the summer of 2017. Globally, olive oil production dropped by 20 percent on average, with substantial reductions in the Middle East, Europe, and North Africa, who are the leading suppliers of olive oil to the United States. According to industry estimates, the declines are expected to continue this year as well.

According to Dr. Adi Naali, head of the Israel Olive Oil Board and Vice Chairman of the International Olive Council (IOC), the fact that olives are a local crop to Israel that was first cultivated in the Middle East contributes significantly to their survival in the changing climatic conditions. “Unlike many other types of trees, the olive tree can endure the most severe weather where many other trees simply collapse,” he says. But the impact on olive trees due to climate change is still evident. “They are definitely affected”, he adds.

Another problem that harms olive trees in different parts of the world but less in Israel is frost waves – an extreme weather event which is becoming more frequent as a result of climate change. Sudden episodes of frost at an unexpected time may harm the olives, especially the young fruits, and affect the quality of the oil produced from those frozen olives. Extreme frost might even kill an entire olive tree.

On top of this, there are other aspects of climate change that are harmful to the olive tree. “Olive trees have one year in which the yield is more abundant, followed by a weaker crop year,” explains Naali. “In most places, there is a balance between trees in different cycles within the same orchard, but extreme weather events are changing this.” He goes on to say that in some orchards, many of the trees experience a weak year at the same time. Also, the difference between the years become more pronounced, and a number of farms even suffer two weak years consecutively.

The primary method of olive cultivation in Israel is dry-land farming, a type of agriculture that relies on rainwater only, without irrigation. These crops, which spread across 60,000 acres in Israel, suffer greatly from increasing droughts.

Olives are also affected by the opposite phenomenon – heavy rainfalls accelerate the worldwide proliferation of one of the most dominant pests in the olive industry: the olive fly, a species of fruit fly that also occurs in Israel. Female olive flies lay their eggs in the olives, and the worms that hatch from them eat the fruit from the inside-out.

Heavy rainfalls can also harm the trees by arriving at an inconvenient time. In recent years there have been cases of extreme rain and even hail at the end of spring, which is the time when olive flowers bare fruits and therefore a highly sensitive period for the trees. This problem is particularly damaging to dryland farms, but also for irrigated orchards, which spread across 20,000 acres in Israel.

The olive growers, for their part, are doing all they can to reduce the damage to their produce – when possible. “As a dryland farmer you are pretty much at the mercy of heaven, you have no water sources, and you cannot irrigate the orchard, so you do not have many ways to deal with these changes,” says Naali. “In the olive groves that are irrigated, part of the challenge is to increase irrigation or change its frequency. Moreover, we are trying to master new practices and tools and learn about existing as well as potential diseases to prepare for the situation,” he concludes.

Climate Change Is Affecting Olive Oil Production. Will There Be Another Hanukkah Miracle?