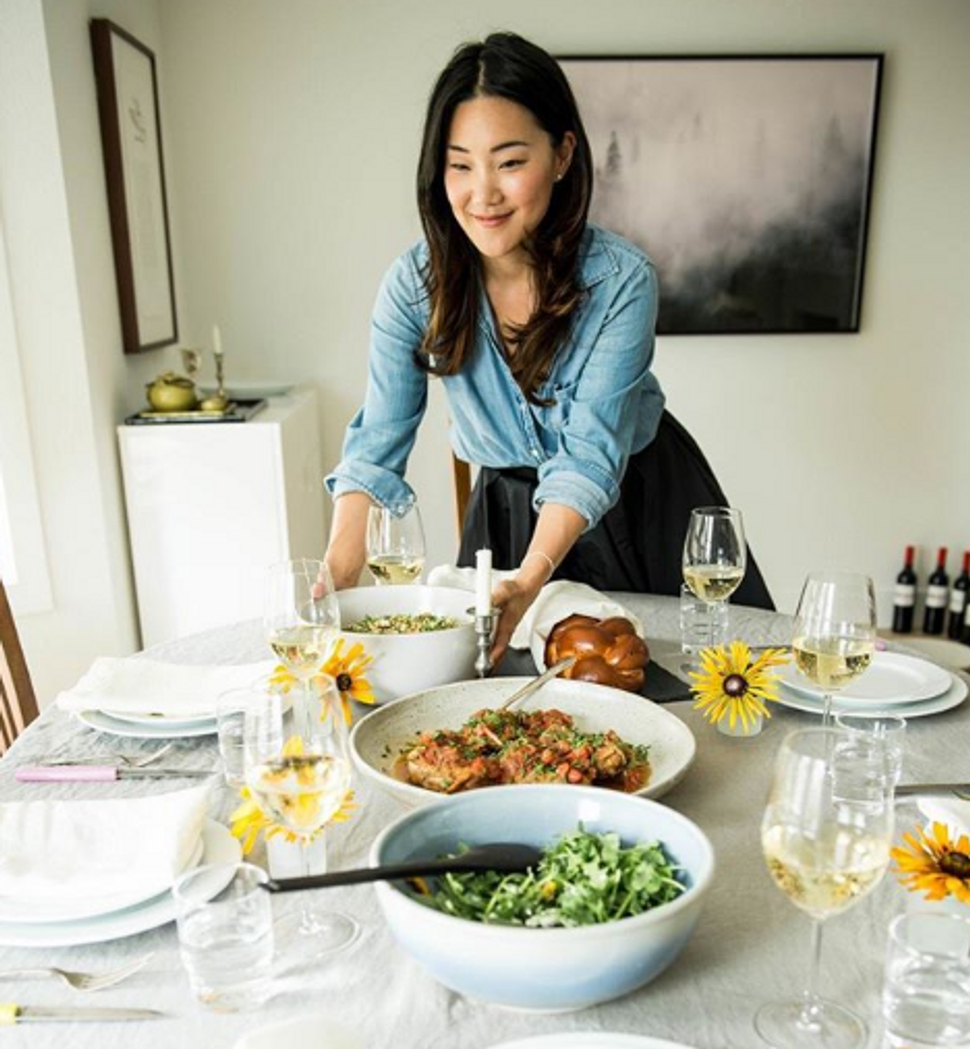 “Nourish Co is a lifestyle brand for ethnically blended and interfaith households,” the Japanese Jewish American Kristin Eriko Posner tells the Forward. “What we do is create nourishing rituals with them.” What that means is Posner creates guides and recipes around the holidays, from [Rosh Hashanah](https://forward.com/schmooze/320610/rosh-hashana/ “Rosh Hashanah”) to the Japanese New Year.

Things have changed since 2017, when Posner wrote her first blog post. Now, eight hundred newsletter readers later, Posner gets emails from people all over the world, including one from Iran, telling her that Nourish Co made it onto the news there.

When Posner got engaged to her now-husband Bryan, who stems from a “very secular American Ashkenazi Jewish family from New York,” she realized her life was lacking tradition. “And Jewish traditions seemed really well preserved to me, compared to my personal experience of my Japanese American heritage,” says Posner. She began taking introductory classes and exploring Judaism, ultimately shocking Bryan and his family when she decided to convert to Judaism.

“Right before converting to Judaism I had this huge freak-out moment, where I worried that my Japanese heritage wouldn’t have enough room to exist in my life,” says Posner. Her rabbi looked at her and asked why there couldn’t be room for both, and in that moment Posner realized that he was right.

Posner makes room for both on her website, where she creates recipes for dishes that combine the best of both her heritages, like mochi latkes and chicken soup with gyoza kreplach. What’s on Posner’s table right now? A melt-in-your-mouth brisket made with tonkatsu sauce, which is Japanese homemade barbecue sauce. And if a recipe makes it onto Nourish Co, chances are Posner’s been making (and perfecting) it for a long time, for tried-and-true results.

Who says Shabbat has to be an elaborate meal? One of my go-to Shabbat meals is a hearty salad, served with challah and wine (TGIF!) It feels silly to even post a recipe, but it’s coming soon on the Nourish Co. journal, so stay tuned. ? For more modern Shabbat tricks and tips, I made a Modern Shabbat Manual for you ?. Visit the link in bio to get your free copy, and tag a friend who could use some extra support around Shabbat. Shabbat shalom! . ? @nicolemorrisonphoto … … … … … . . #nourishingtraditions #heritage #judaism #nourish_sf #culturaltraditions #healingrituals #spreadthelove #communityfirst #bedeeplyrooted #livemoremagic #shabbatshalom #myshabbattable #shabbat #gatheringslikethese #happyfridaypeeps #weekendvibes✌️ #healthyish #eatwelleveryday #beautifulhealth #nourish_sf #onmytable #nofussfood #hereismyfood #itadakimasu #simplepleasures #tastemade #mycommontable #eattheworld

Last March, Posner had a Bat Mitzvah ceremony and delivered a dvar Torah about the significance of taking on traditions. “But then I think, once you have that foundation and background, and understand them, you can update them,” she says. “Choose what resonates with you only. Because otherwise you just won’t do them, and then what’s the point?”

So Posner has chosen her traditions, from the Japanese heritage she was born with to the Jewish heritage she has taken on. And she’s celebrating her chosen traditions with her diverse ethnically blended base of followers, over a plate of chocolate chip cookies with matcha salt.