This Chef Is Making Artisanal Bread With Kasha Varnishkes 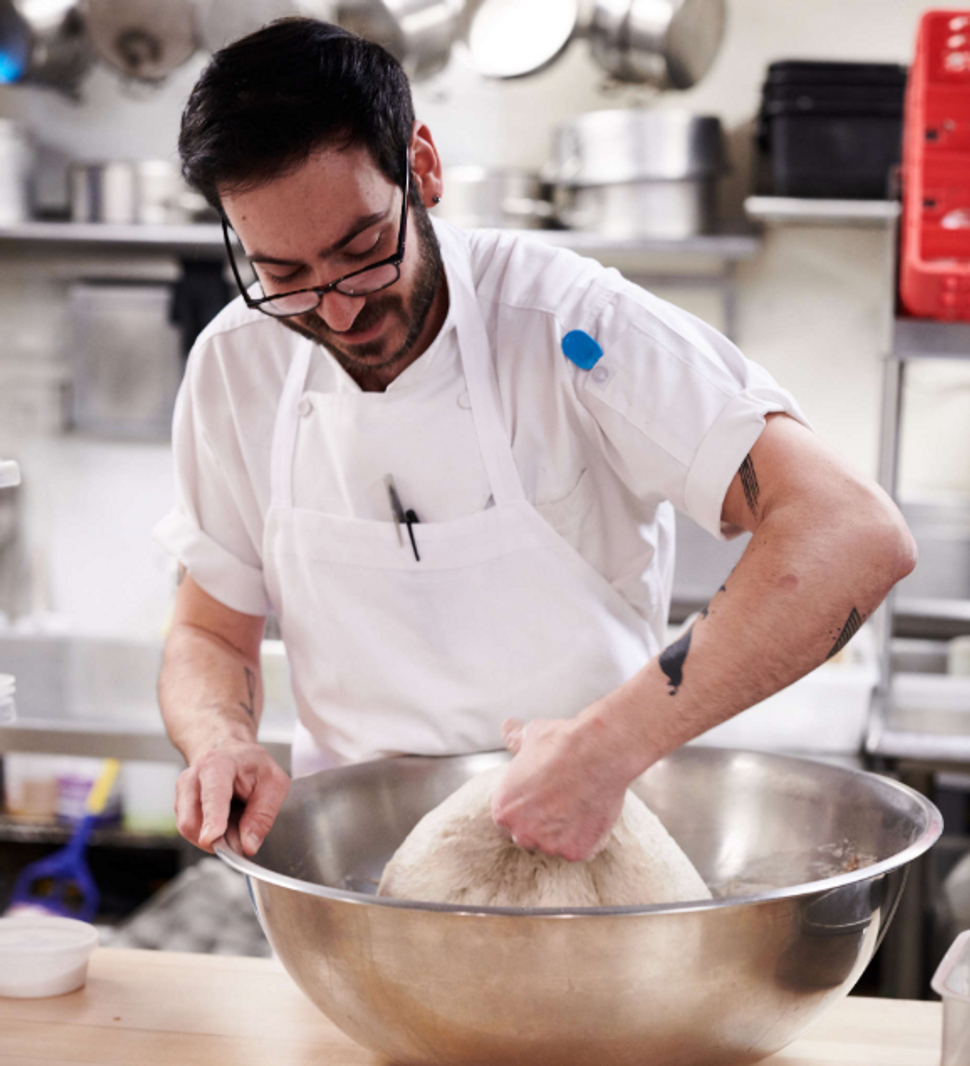 Remember the old commercials where peanut butter and chocolate collided into a spectacular combo that made both parts seem even tastier?

A New York chef has done that. With bread. And kasha varnishkes. And schmaltz and onions.

And if there’s a more decadent way to break Passover this year, we dare you to find it.

The backstory: Max Blachman-Gentile, chef-baker of New York’s Cafe Standard, had been experimenting with “porridge breads” for years. When he joined the restaurant this year, he decided to plumb his background – one of his mothers is Jewish – for a new creation.

The result, kasha porridge bread, has become an unlikely sensation, its kasha, onions and schmaltz coalescing into an edible that’s completely beyond.

The Forward caught up with the busy chef to get the granular story on his Jewish-inspired bread phenom:

How did you come up with the idea for kasha porridge bread? Was there an “aha” moment involving a bowl of kasha varnishkes?

I’ve actually been working with porridge breads that I’ve designed to taste like a certain porridge or soup dish for a few years. Before The Standard, while at Tørst in Greenpoint, I made a dosa porridge loaf with fermented rice and dal based on the South Indian dish dosa. I also made an injera porridge bread, and a French onion soup roll. When I started at The Standard though, I knew I wanted the first porridge bread I made should be something that told a little bit of the story of my upbringing.

How do kasha varnishkes fit into your childhood food memories?

I do have a Jewish mom, and she did make kasha varnishkes sometimes when I was a kid. But growing up, I actually hated it. I would pick out all of the pasta and leave the rest behind. I think I just didn’t like the taste of buckwheat. As I’ve gotten older I’ve really learned to love that flavor, especially in bread. It felt natural to want to use the kasha porridge in a loaf. Besides that there was a lot of kugel, matzoh ball soup, latkes, all of the special holiday treats, but my other mom cooked a bit more often when I was growing up.

Have you incorporated Ashkenazi or Sephardic food or ingredients in other recipes?

I love using schmaltz. It’s just one of the best fats for building subtle flavor and umami in a dish. I have family in Israel as well, some of my grandma’s cousins moved there after the Holocaust instead of to the United States, and so a lot of my baking and cooking is really rooted in that food more than Ashkenazi recipes.

Besides the obvious ones like hummus and shawarma, I love making malawach, a flaky Yemenite bread sort of similar to a scallion pancake or paratha, and we exclusively use Har Bracha tehina which we get imported from Israel. It’s made by a family of Samaritan Jews who live in the West Bank and it’s the best tehina I’ve ever tasted. We also use a lot of preserved lemons, amba, black lime, and chick peas, which are all ingredients I eat a lot when I’m in Israel and flavors that I really love.

What’s the dominant flavor you want a diner to experience in the bread? Is it the onions, the kasha, or something else?

The kasha is definitely the dominant flavor, as there is a lot of buckwheat porridge and also buckwheat flour in the dough. If you don’t like buckwheat, you probably won’t like this bread. The roasted, earthy flavor comes through as soon as you smell the bread, and really carries all the way through eating it. The onion and the schmaltz are there more as really good backup dancers that help bring in the umami and give the crust a really nice thin crackle. Because of all of the gelatinized starch in the porridge, the dough also stays super moist and chewy, so it’s partly a textural experience as well.

Traditional Jewish foods have been making a comeback lately. Why do you think a new generation’s embracing them? We’re seeing lots of artisanal treatments of Jewish comfort food.

There seems to be a movement towards finally accepting that cuisines besides French and Italian can be special too, which I am very excited about. I think this provides space for people to cook food that they either grew up with, or are just really passionate about, and show people that it’s much more complex than they realized. My favorite foods are always ones that came from communities that were often impoverished and had to make something delicious with what little they had. Jews, as with many other cultures, love good food and had a knack for taking cheap ingredients and making them special, so it makes sense that people are finally catching on to that.

What has the response to the bread been from diners at Cafe Standard?

Overwhelmingly positive, which I’m really happy about. Generally, people are just really surprised to find good bread at a big hotel. Most people, myself included, just assume hotels will be buying cheap bread from a big wholesaler, so it catches them off guard. It also confuses people a lot to find out that we’re selling the bread retail every day in the Café – no one really expects that either. It just means I need to keep trying to get the word out that people can get their bread here now instead of having to go to the supermarket!

You make me ? when I feel like ?… #goodbreadday #sourdough #bread #crumb

This Chef Is Making Artisanal Bread With Kasha Varnishkes