Israeli Cuisine Is More Chic Than Ever, In Chicago’s New ‘Galit’ 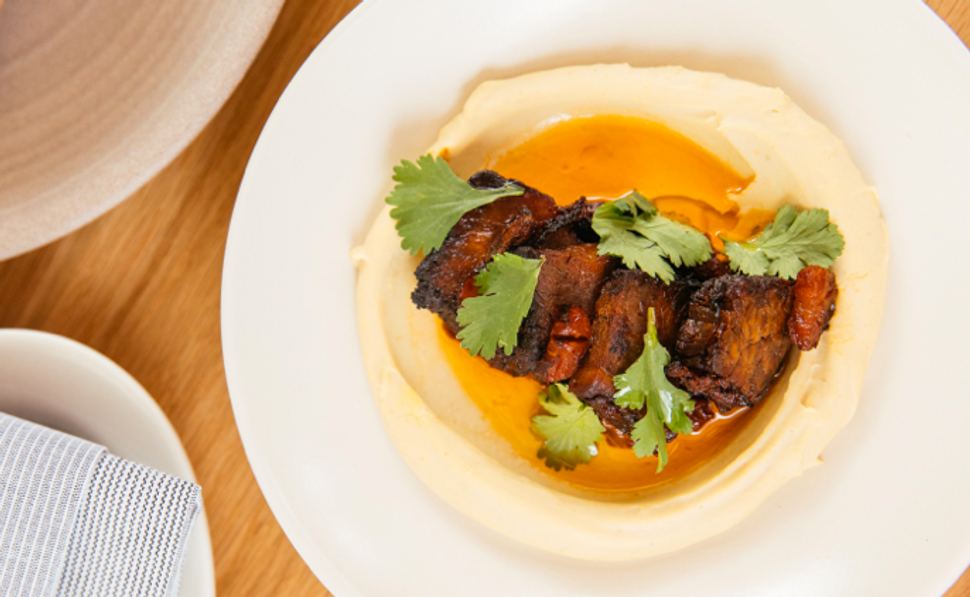 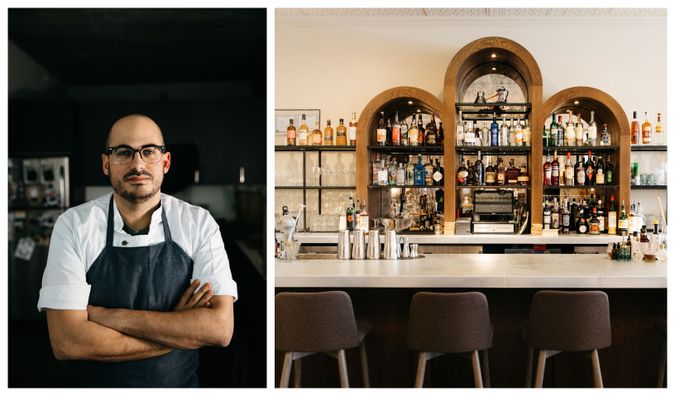 You’ve won a James Beard Award for your Israeli-accented cooking at pioneering New Orleans eatery, Shaya. How do you top yourself?

Named for Engel’s baby daughter Margalit, Galit is now packing in the crowds in Chicago’s Lincoln Park neighborhood. On the menu: Tzimmes-y carrots with Bulgarian feta; falafel with “funky mango”, labneh, and pickled turnips; and an irresistible shakshuka with sweet potatoes, “so many fresh herbs”, and laffa bread.

During a rare break, Engel talked to the Forward.

How did your time at Shaya influence Galit?

Shaya’s a big influence – Galit can be seen as the next step of Shaya and how I want to operate my own restaurant cooking similar foods. The menu at Galit has a lot of the same building blocks, like harissa and labneh, and some dishes I feel are very personal to me that I wanted to bring to Chicago, like king trumpet mushroom hummus.

Israeli food’s having a moment, with chef-driven places like Galit opening across the country. Why do you think the cuisine’s caught on the way it has?

Foods of the Middle East are prevalent in America at the small family-owned restaurant level. Falafel, hummus and shawarma are well known in the canon of American food. A lot more people have been traveling to the Middle East with cheaper airfare prices than 30 years ago, and they want to connect with their trips – and a very easy way to transport yourself across the globe from your hometown is through food. The American diet has also changed to include a lot more yogurts, healthier fats like olive oil or tehina, and are more vegetable and grain-focused. 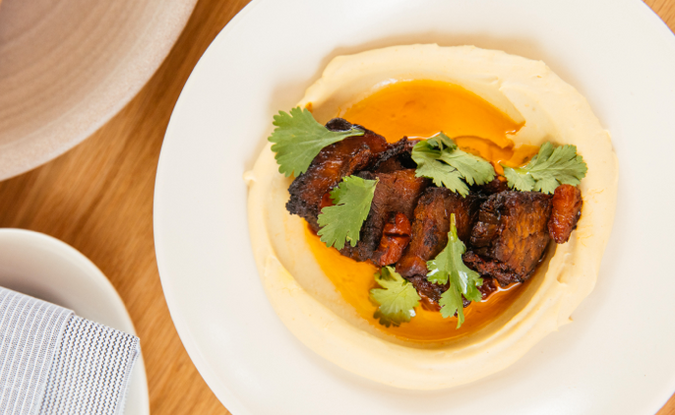 Is there an especially Chicago twist you’re bringing to Galit’s menu, or its look and feel?  We opened with a steak and potatoes dish on the menu. It was marinated traditionally in a shishlikh marinade and served with crispy potatoes, smoked paprika, and a schmaltz hollandaise. It was a hit, but once we got some summer produce in we knew it was time to switch it up. The building had one wall of exposed Chicago brick which we left untouched and it also surrounds our charcoal hearth in the kitchen. We also put our wood-fired pita oven on top of a stack of brick as well. It’s small bits of nuance that tie us back to Chicago.

Can you talk about provisions? Are you sourcing food and spices from Israel and the region, or finding what you need locally?

Sourcing is a huge part of what makes our food so great. Some of it is local and some of it is from the Middle East. Spices like sumac and aleppo pepper come from the Middle East, though our za’atar is grown locally and made in house. Our tehina is from Soom, coming from Israel by way of Philadelphia, while our chickpeas are all from Rancho Gordo out in California. All our meats are raised locally in the Midwest.

What’s different about your hummus? Every chef I meet has a different spin/approach.

Galit’s hummus is heavy on the tehina – very smooth and airy but not watery. When we make a batch I always check to make sure it has the right texture. Smooth, creamy and not gummy, almost like tempered butter just sliding down the back of your throat. Our ingredient sourcing for the hummus is super important to me. It’s makes a big difference when you use the right chickpeas and tehina.

Same with pita – some chefs consider them a signature. Are yours made in-house?

Our pita are made in house! We use an unbleached and unbromated all purpose flour and about 20% of the flour is actually fresh-milled, stone-ground Turkey Red Wheat from The Mill at Janie’s Farm, a local mill here in Illinois. It’s got a lot of oil in it and is on the drier side as far as dough goes. Then, we ferment it for 48 hours in a refrigerator so that it has a very slow proofing process. Finally, it’s cook in an imported Neopolitan style pizza oven. 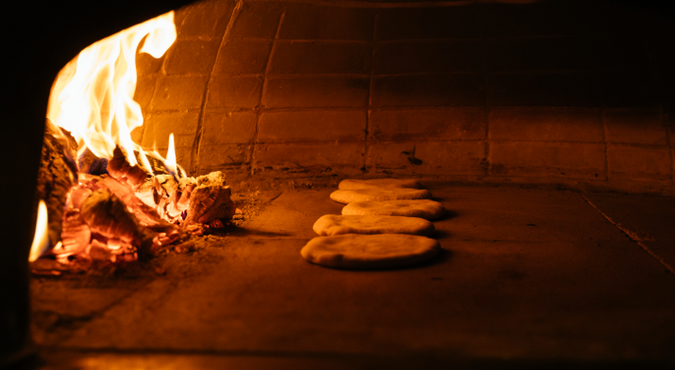 Pitas in the oven at Galit Image by Sandy Noto

Neither one of my grandmothers is an outstanding cook. I’ve had a lot of Jewish-American briskets and this one is just a version that I think touches on those family memories for a lot of people. It’s has the ingredients that everyone knows and loves but is executed at a high level with great ingredients. More than anything, I want guests to connect with a dish and keep coming back for it because they crave being able to relive a moment from their past with family and friends. The bubbe’s brisket was a shot in the dark, and I’m excited that people have really enjoyed it thus far.

Your own experiences in Israel also influenced your cooking. Can you talk about that?

My first food memories are really from my first trip to Israel at age 8. Eating falafel, hummus, borekas had a massive impact on me. I went back for Birthright as a college freshman and then worked there for a summer when I was 22. I lived in the Shuk HaCarmel and worked in Neve Tzedek. It became my neighborhood, and I still feel very connected to it and all the little restaurants and market stalls close by. It was eye opening for me to explore without anyone telling me where to go or what to eat, I just experienced. I went back a few years ago and spent time with a family in Rosh Ha’ayin and they quickly turned into family for me.

I learned how to cook a lot of their traditional Yemenite dishes from several generations; it’s a big part of how I cook still. I’m going back the first week of September, and I’m super excited to see how others on my trip connect with the food and history for the first or second time.

Israeli Cuisine Is More Chic Than Ever, In Chicago’s New ‘Galit’