In an Expansive New Cookbook, Leah Koenig Takes on the Jewish Culinary Canon 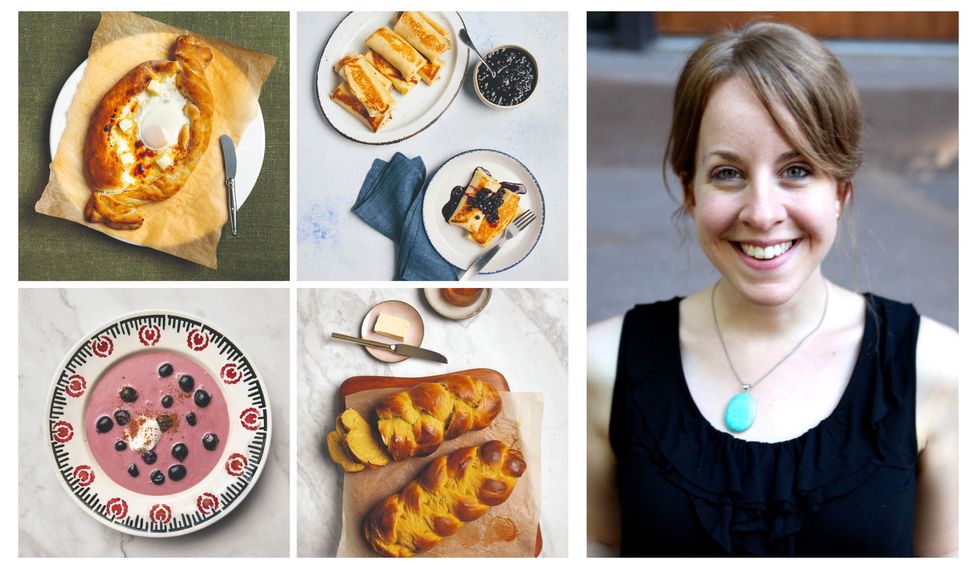 What is Jewish cooking?

“It depends entirely on whom you ask,” Leah Koenig answers in the introduction to her latest book, “The Jewish Cookbook,” which contains over 400 Jewish recipes from around the globe.

“Jewish communities fanned out from the Middle East to places near and far,” she writes. “These communities were bound together by a shared basic set of liturgy and laws. They were also deeply influenced by the customs, people, and ingredients found in their new homes.”

Koenig, whose previous cookbooks include “The Hadassah Everyday Cookbook” and “Modern Jewish Cooking,” points out that her new book isn’t the first to present Jewish food in a global context rather than homing in on Ashkenazi, Sephardic, or Mizrahi foodways. She cites Claudia Roden, author of “The Book of Jewish Food,” and Joan Nathan, whose many cookbooks include “King Solomon’s Table: A Culinary Exploration of Jewish Cooking From Around the World.” She’s particularly indebted to food writer and culinary historian Gil Marks — “I dedicate the book to Gil Marks,” she said, “because I stand on his shoulders for sure.”

Still, Koenig said that her new book, published by Phaidon, couldn’t have existed until now, “because Jewish food was different 20 or 30 years ago,” she said. “Jews are constantly moving, taking traditional foods and putting them in new contexts. So even if there were books doing global Jewish food, Claudia’s book didn’t have any Ethiopian recipes in it. It’s no fault of hers, but Ethiopian Jews have only recently moved to Israeli. I have recipes from the Ugandan Jewish community, which is still not a very well known Jewish community.”

Awareness of these farther-flung Jewish cuisines is growing, Koenig says, in part because social media and the Internet are bringing cultures together, and party because of chefs who are elevating Jewish cuisine and exploring new ways of interpreting it on the plate. “So you’re starting to see the evolution of Jewish cuisine happen at a faster rate,” she said. “It’s changing really quickly and my goal for this book was to capture this particular moment in time and sort of capture the beauty of the world of Jewish cuisine.”

That she does. With such an ambitious scope, the book might have felt dense, but it doesn’t: it’s easy to navigate, divided into clear categories such as Breakfast, Soups & Stews, and Dumplings, Noodles & Kugels, with enough white space around each recipe to make it easy on the eyes. Each recipe is accompanied by a few sentences about where it’s from and for what occasion it might be served. There’s a lot of information, but it’s served up in easily digestible portions.

Even for a Jewish-food authority like Koenig, creating such a comprehensive book must have been daunting. During the research process, she said, she quadrupled an already robust Jewish cookbook collection.

She also reached out to friends, including Persian and Ethiopian Jews. “I would email them and ask, ‘What dishes are on your family’s tables at the holidays?’” she said. “I’ve been writing about Jewish food for more than 10 years now. It’s amazing how many of them I’d never heard of. It was a gratifying research process.”

Having tested and retested over 400 recipes, did Koenig have a favorite? In fact she had two: One is called hamin macaroni — hamin being an Israeli cousin of cholent, the long-simmering Sabbath stew. This one is made with bucatini, chicken, cardamom and other spices, along with onion and eggs. “You cook it all together in a Dutch oven for a really long time,” Koenig said. “The bucatini takes on the flavor of the chicken fat. You put in a very small amount of actual liquid, so it gets a little kugel-y, not mushy — a pudding-like consistency. But the top is all crunch and it’s really good.”

The other recipe she highlighted is for kugelhopf, an Alsatian cake-bread made with yeast, that’s similar to the Italian Christmas cake panettone. “It’s a big, fluted bundt-pan cake that has almonds and dried fruit and lemon zest.” While it can be made in a regular bundt pan, Koenig encourages the reader to spring for an actual kugelhopf pan, available on Amazon for $20. “It’s this beautiful tall cake,” she said. “It’s totally worth the investment of 20 bucks because it doesn’t look the same in a bundt pan.”

Whether originally from Alsace or Israel; India or Morocco, the dishes that make up the “The Jewish Cookbook” are distinct in flavor and technique but bound together by a shared religion. That so many of them can now be found in one place makes the vast world of Jewish food feel that much smaller and more widely accessible.

“Leah shows us that Jewish food is not defined by place, but by spirit, culture, and faith in so many senses of the world,” food writer Julia Turshen writes in the book’s introduction. “Unlike just about every other cuisine in the world, Jewish food is not distinguished by geography. It is a diasporic cuisine, which means it’s also defined by resilience, adaptability and infinite adjustments, longing and remembering, and often homesickness — even if home is no longer.”

With “The Jewish Cookbook,” Leah Koenig offers a taste of home — wherever that may be.

In an Expansive New Cookbook, Leah Koenig Takes on the Jewish Culinary Canon