This Rosh Hashanah, Celebrate With a Classic Persian Dish of Antiquity 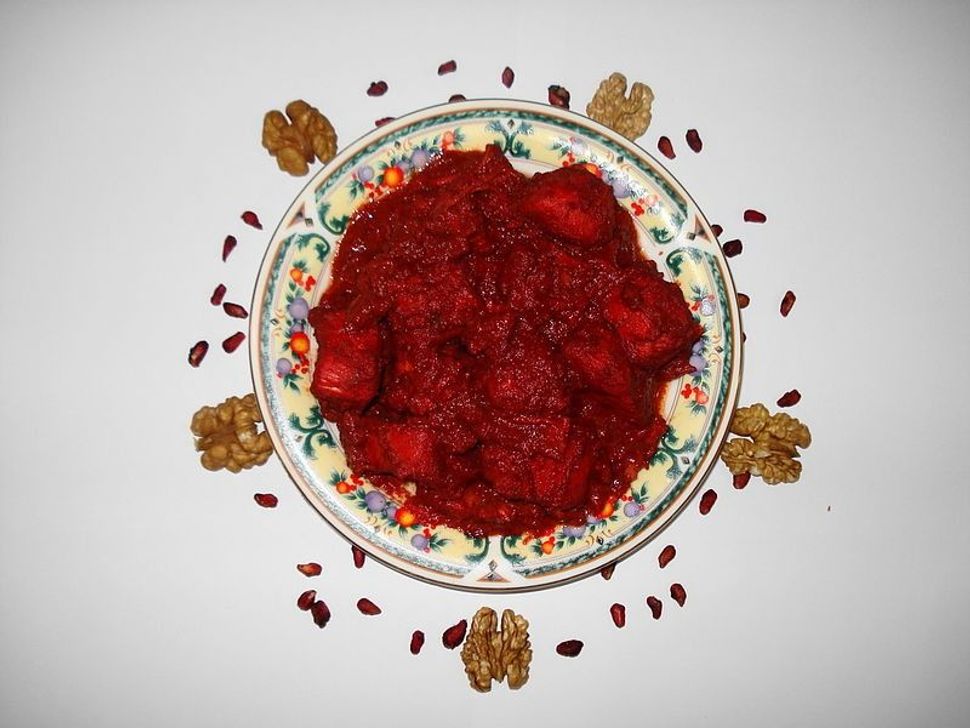 One of the greatest glories of Jewish cuisine is its diversity – a celebration of the Diaspora that touches upon the antiquity of our people, as well as the joys and sorrows and memories that are the apron strings we cling to as the New Year turns.

As an Ashkenazi Jew, my memories are closely bound with the foods of my youth around this time of year – teiglach, lekach, round sweet challah and so much more. Yet the readers of The Forward are an eclectic lot, and like all Jews, we strive to learn, to expand our horizons to the stories and flavors of other Jewish communities.

As a gastronomic anthropologist, my greatest joy is bringing these nuances of taste into the greater Yiddishkeit. Today, I’m honored to share with you a dish replete with symbolism to Persian Mizrahi Jews during the New Year – the sweet and sour duck stew known as Khoresh-e Fesenjān – خورش فسنجان

Fesenjān is an Iranian stew (a khoresh) flavored with pomegranate syrup and ground walnuts. It is traditionally made with poultry (duck or chicken), and is served with Persian white or yellow rice (polo or chelo).

Fesenjān is one of the best stews of Iran, which is believed to have originated in the province of Gilan bordering the Caspian Sea. The area was particularly renowned for its wild duck population and the Fesenjān recipe first made use of duck meat, which was substituted with chicken at a later date. The dish was much favored during the fall season in Persia when the pomegranates matured. Unearthed stone tablets from the ruins of the ancient capital of Persepolis demonstrate that as far back as 515 BCE, early Iranian pantry staples included walnuts, poultry and pomegranate jam. Even today amongst Iranian Jews, both in Iran and elsewhere, Fesenjān is a must-have dish for weddings and special occasions alike.

Fesenjān is also considered to be a classic Persian Jewish Rosh Hashanah dish to celebrate the New Year and to remember it will have both sweet and sour moments in it.

My version of Fesenjān uses the classically-prescribed duck and my own special Iranian Baharat spice blend for absolute flavor mastery.

You can easily substitute chicken legs and/or thighs if you’re so inclined, but nothing quite compares with the succulent richness of duck.

What makes for good duck or chicken? First, always go for an heirloom breed of either if you’re lucky enough to find one – they taste FAR better. Second, you really want to enjoy poultry that has had a free-range life instead of being cooped up in an industrial factory farm. Third, go organic with no additives in their diet – the way Hashem intended. (I recommend this glatt kosher duck.)

3 ½ tablespoons of The Hirshon Fesenjān Baharat spice mixture, made as follows:
Blend 2 tbsp of each whole spice together in a bowl: Black Pepper, Cumin, Coriander seed & Paprika
Next, add one tbsp of each of the following:
Clove, Nutmeg & Sea Salt
Now add ½ tbsp of Cardamom seeds and Cinnamon
Grind all the spices together into a powder. Lightly toast until fragrant and darkens slightly. Keep the leftover blend in an air-tight container.

Pomegranate seeds, for garnish
—
Place the walnuts in a food processor and grind them until they resemble coarse meal. Combine the walnuts and stock in a medium saucepan over medium heat and cook, stirring occasionally, for 30 minutes.
Meanwhile, heat 2 tablespoons of the oil in a large Dutch oven over medium-high heat. Working in batches, season the duck legs with salt and add to the pot.
Cook the legs, turning, until they are light golden brown on both sides, about 20 minutes. Remove the legs, transfer them to a plate and set aside.
Add the remaining oil. When the oil is hot, add the onions. Cook until the onions have softened, about 10 minutes. Add the turmeric and reserved duck legs. Cook until the turmeric becomes fragrant, about 5 minutes.
Add the walnut mixture and Baharat mix to the duck and bring to a simmer. Adjust the heat to medium-low. Place a wooden spoon into the pot so that it is touching the bottom of the pot and cover (thus keeping the lid ajar).
Stir the stew every 20 minutes and skim any excess fat that rises to the top for about 1 hour. Add the molasses, pomegranate juice and sugar and continue to cook, stirring occasionally, until the stew has become deep brown in color and the duck is tender, about 1 hour. Taste and add sugar if necessary. The stew should be balanced between sweet and sour.
Garnish the stew with pomegranate seeds and serve over basmati rice or crusty bread alongside a mixture of fresh herbs.
Note: As with most stews, it’s best made the day before. Gently reheat before serving.
Jonathan Hirshon is a gastronome, historian and bon vivant who blogs regularly as The Food Dictator – his day job is advising tech companies as a public relations consultant at Horizon PR.

This Rosh Hashanah, Celebrate With a Classic Persian Dish of Antiquity