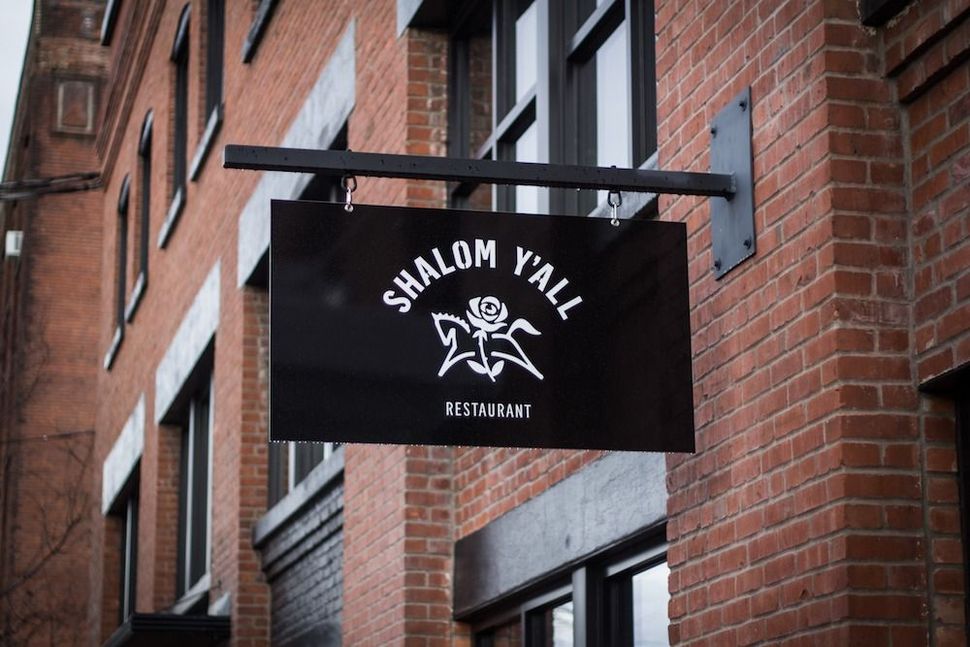 “You have reached the Jewish restaurant. If you bitches want to eat our shitty food, just come here and fuck yourself.”

That was the message callers heard this weekend if they dialed Shalom Y’All, a Portland, Oregon restaurant that serves Israeli food.

The restaurant’s phone system had been hacked; its phone number was also used to make threatening prank calls to other Middle Eastern restaurants, according to local station KGW. Portland police are investigating the hacks and calls as possible bias crimes.

“It’s the first time something of this nature has happened,” Shalom Y’All manager Jamal Hassan told the Forward. “Things are more tense in Portland than I’ve ever seen in the 15 years I’ve been here, and white-nationalist and racist voices have been more vocal. But we don’t see that at the restaurants. We get a lot of love from our guests.”

According to KGW, the restaurant was busy with Saturday’s dinner rush when a staff member took a “threatening” phone call. A guest then let management know about the hacked answering message.

The restaurant posted an all-caps message on its web site as soon as it learned of the breach. “We are deeply disturbed by the hateful, destructive, violent messages they have been sending and disseminating using our account. We apologize if you have been a victim to this appalling criminal behavior,” it read in part.

A spokesperson for the Portland police told the Forward that “we are not far enough into our investigation to say how this hack took place. It certainly is disturbing.”

Shalom Y’All opened about 3 years ago, serving “Israeli street food” at a walk-up counter at Portland’s popular Pine Street Market before finding a permanent home in the Southwest neighborhood. Its popularity led to a second location with full service and seating in downtown Portland.

“We’re pretty famous for our hummus options – we go through 20 gallons of hummus on some days. We bake pita fresh to order. Shakshukas, at all hours, are also one of our signatures,” Hassan said.

Shalom Y’all’s mission of inclusivity, Hassan said, makes the phone-hacking incident even more appalling. “Our name is the point. It’s like, ‘peace, y’all’. The ethos is to bring people together. Israeli cuisine is a melting pot of all foods around the Middle East. By having an Israeli restaurant, the goal is to bring people from all walks of life to celebrate over food from that part of the world.”

Hassan said Portland police, he added, are offering “extra diligence. They’re on high alert, with a lot of units in the area.” Shalom Y’all “is operating as normal,” he said. “One of the first things we did was an assessment of the threat. Was it a hateful prank, or targeted in way that violence or vandalism might happen? We talked to the poolice. They assessed the harassment and the content of the message. They felt comfortable it was an isolated incident. The safety of our guests is most important here, but the best way to fight this kind of thing is not to let it stop you.”

The owner of a local Jewish restaurant was less sanguine, however. Sonya Sanford, who opened nouveau-deli Beetroot Market & Deli in August, said the incident is a manifestation of much deeper issues in Portland. “As a Jewish person, it’s something that’s been on my mind. And as an openly Jewish business with queer employees, it’s something we think about,” she told the Forward.

“Portland is surrounded by white nationalist enclaves,” Sanford said. “It’s very progressive, but not necessarily very diverse. The Jewish community is sizeable, but it’s not same as larger urban centers. We get Proud Boys marches, and when that happens, we’re afraid. They’re here en masse, to terrorize.”