Letter from Berkeley: A bagel that tastes like home is worth waiting for 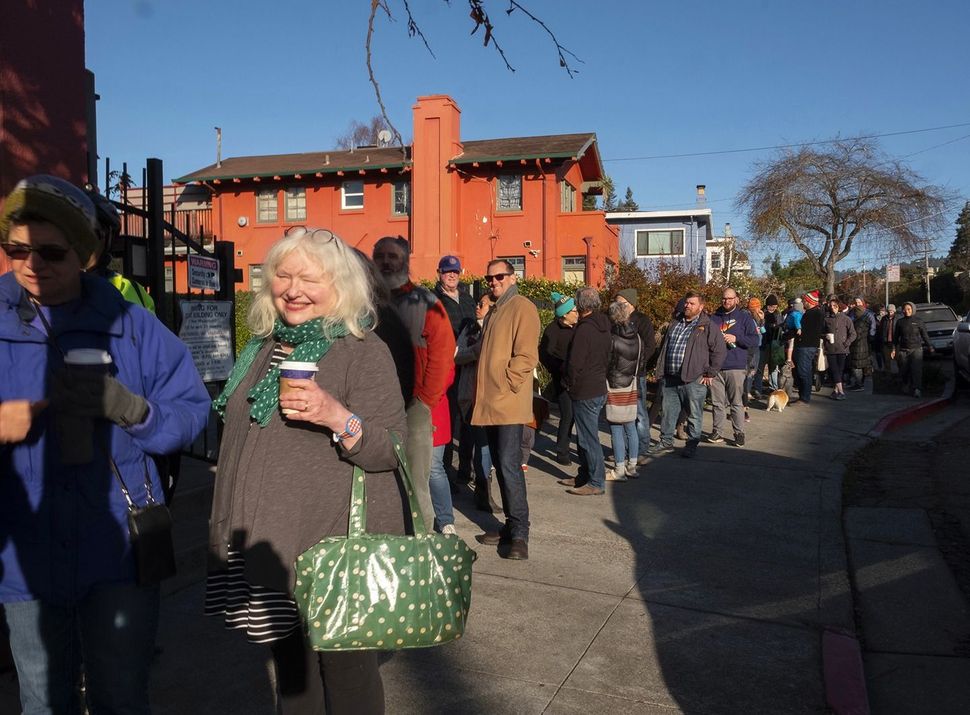 Marlena Spieler, a cookbook author and former food columnist, was among those waiting in line for Boichik Bagels’ “soft opening” on Friday. Image by Kerry Kehoe

March 8, 2021 may be a date that goes down in Jewish history: that was when The New York Times declared “The Best Bagels Are in California.” As evidence writer Tejal Rao singled out Berkeley, California’s Boichik Bagels, which, she wrote, “have the look of Labrador puppies curled up for afternoon naps: soft and pudgy, golden roly-polys.” Below is The Forward’s feature on Boichik during its 2019 opening.

There were more than 50 people waiting outside in the cold before the much-anticipated opening of Boichik Bagels on Friday. They had started lining up by 6:30 a.m., though the doors didn’t actually open until 7:50 a.m. Before the brand-new store sold out of its planned 2,000 bagels by 1 p.m., some customers had waited more than two hours.

“I typically never eat bagels west of New Jersey,” said Marnina Cherkin, who lives in Seattle and, along with her husband Sam Ostroff and their aunt Deirdre McLaughlin of Berkeley, were the first in line. “The pursuit of a New York bagel outside of New York is mostly pointless,” Ostroff added, “because it’s so elusive.”

Not anymore. Two years after Emily Winston, an engineer and industrial artist from Old Bridge, N.J., started selling bagels out of her home kitchen in Alameda, Calif., the Bay Area finally has a bona fide New York-style bagel shop, and a kosher one at that. 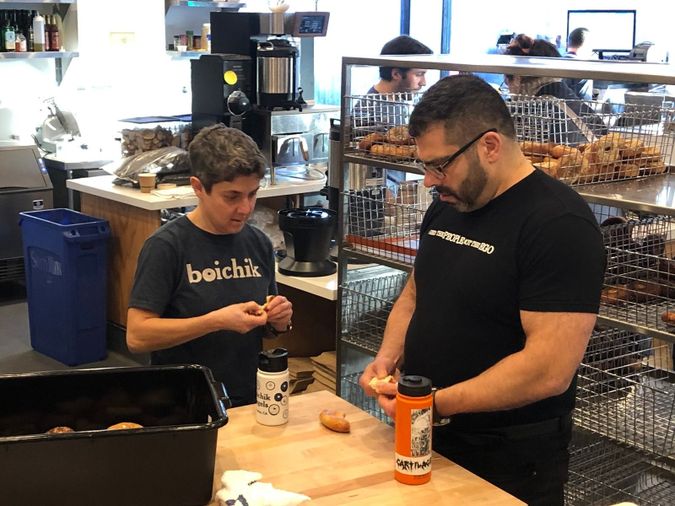 Emily Winston, Boichik’s owner, got some help for opening day from Joe Gaglio, a Wisconsin bagel-maker who helped train her. Image by Alix Wall

It’s worth noting that the Bay Area has been going through a sort of bagel renaissance lately. Since 2012, Berkeley’s wholesaler Baron Baking and Beauty’s Bagels of Oakland were seen as the best in the business. This summer brought two new players: Daily Driver in San Francisco, which like Beauty’s does excellent Montreal-style bagels (boiled in honey water and wood fired) and The Bagel Mill in Petaluma, doing what its chef calls a New York-California hybrid. Also earlier this year, Oakland’s kosher Grand Bakery teamed up with a local bagel maker to offer a bagel that is sold primarily in grocery stores.

I first wrote about Winston two years ago for J. The Jewish News of Northern California, where I’m a contributing editor writing mainly about food. She told me then that when she read in 2012 that H & H Bagels was going out of business, she took it personally: her formative food memories were of her father returning from the city with a selection of smoked fish from Zabar’s and a bag of H&H bagels.

H&H’s were slightly sweeter than many other bagels, with the perfect trifecta of texture, flavor and chewiness in Winston’s mind. “A world without an H&H bagel is a world I don’t want to live in,” she told me then. “It was like someone died and no one thought to tell me.”

Winston, now 41, soon began reading and watching YouTube videos about bagel-making, and experimenting with various techniques. Friends who tasted her bagels loved them, and she realized that if she was yearning for a New York bagel in her adopted home, surely others must be, too.

She started doing periodic popups, making eight dozen bagels each time — and once selling out by 8:17 a.m. though she wasn’t even supposed to open until 8:30. A year ago, she began construction inside a storefront on Berkeley’s College Avenue with a storied history: it was the very first Noah’s Bagels when that chain began in 1989. 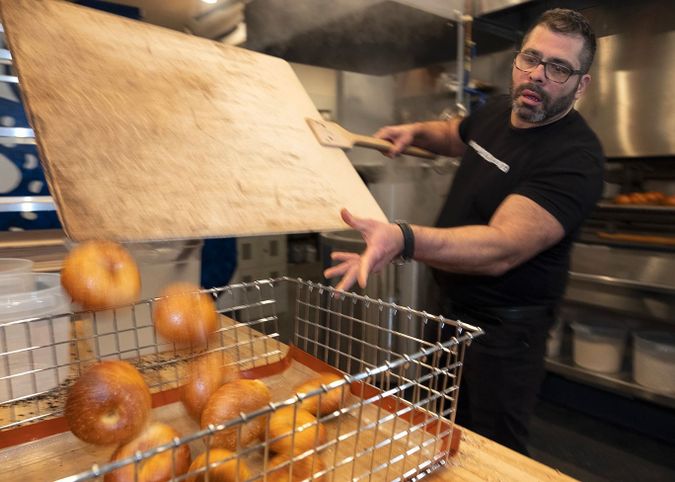 I’ve lived most of my life in California, but my dad was born in the Bronx and my mom grew up in New Jersey. I spent much of my 20s living in New York, and when I first moved to the Bay Area, often flew home from New York with a dozen bagels in my carry-on. So I’ve been as excited as anyone about Boichik’s. Still, I’ve been astounded at how many times over the last year I’ve been asked when Boichik’s would open, including at a recent shiva call.

The original opening was scheduled for early 2019, but permitting and construction delays kept pushing it back. While everything was ready, Winston decided to do a “soft opening” with just bagels and schmears (no smoked fish) for what she dubbed “Bagel Black Friday.”

“Thank you for being part of this complete insanity that has taken over my life,” Winston told her six employees before unlocking the doors.

Among those in the kitchen was Joe Gaglio, owner of Gotham Bagels in Madison, Wisc., where Winston had spent a week in 2018 learning bagel-making technique. Gaglio, a gruff New York native who breathes bagels, was in town visiting his daughter and sister for Thanksgiving, and offered to help out with the opening.

He asked rapid-fire questions and offered his critique on everything from the saltiness to the grade of cornmeal used to the height of the work surface outside the oven, making a steady stream of comments like, “We have to talk about these whole wheats.”

On the wall near the door is a bat mitzvah photo of Winston with her grandmother Lila Krufka, who died in 2015. Winston, who is queer, said that after she had “gone butch,” she went home for a visit and Krufka remarked, “such a boichik.” That inspired the name of the store.

Winston told me she thinks of Krufka often, imagining her sitting in the window kibitzing with customers, asking them, “Have you tried my granddaughter’s bagels? Aren’t they the best?”

Some in line on Friday were excited not just about the New York style of Winston’s bagel recipe, but about the kosher certification on Boichik’s wall. Rabbi Gershon Albert, a part of East Bay Kosher, said it is one of only two officially kosher establishments currently operating in Berkeley, joining Flying Falafel, which is vegan and opened in 2017 but only got kosher certification this year.

“This is a huge day for us kosher keepers,” said longtime Berkeley resident Andrea Brott, who had waited in line despite not being a morning person.

Brott said the last time she was able to buy a fresh bagel that was certified kosher in Berkeley was in the early aughts.

That was from Noah’s Bagels, the chain savvy in selling New York nostalgia with stores decorated in faux subway tile, but not in actually making New York bagels — for starters, they were steamed rather than boiled. Noah’s founder, Noah Alper, has been among Winston’s advisers; he sold the chain to Einstein Bagels in 1999.

The rabbis of East Bay Kosher decided to provide Boichik with certification at no cost.

“For Jews living in major metropolitan areas with large Orthodox communities, it’s hard to imagine living in an area without kosher establishments,” explained one of them, Rabbi Gershon Albert of Cong. Beth Jacob in nearby Oakland. “We feel a responsibility to create and strengthen infrastructure that facilitates mitzvah observance in our Berkeley and Oakland communities.”

Winston, who is not religious, arranged with the rabbis to transfer ownership of the store to a non-Jew each Shabbat, using a decades-old halachic ruling to skirt the prohibition against Jews working or making money on the Sabbath. Though the major kosher-certification organizations no longer allow such deals, the rabbis of East Bay Kosher agree that it can be done here because the need is so great.

“This has become the largest expression of my Jewish identity and a spiritual path for me in a number of ways I don’t quite understand,” Winston told me a few months ago. “The fact that so many people are desperate for a kosher restaurant makes it feel right.”

By 1 p.m. on Friday, Boichik was turning people away for lack of bagels, and Winston noted: “Only one person complained the whole day.”

She had decided to close on Saturday to regroup and make dough, and opened again Sunday at 7:30 a.m. It was raining, but people still lined up starting at 6:30 with another line around the block. This time, all 2000 were sold out by 11.

Letter from Berkeley: A bagel that tastes like home is worth waiting for