Behind The Scenes At Toronto’s Glitziest — And Very Jewish — Steakhouse 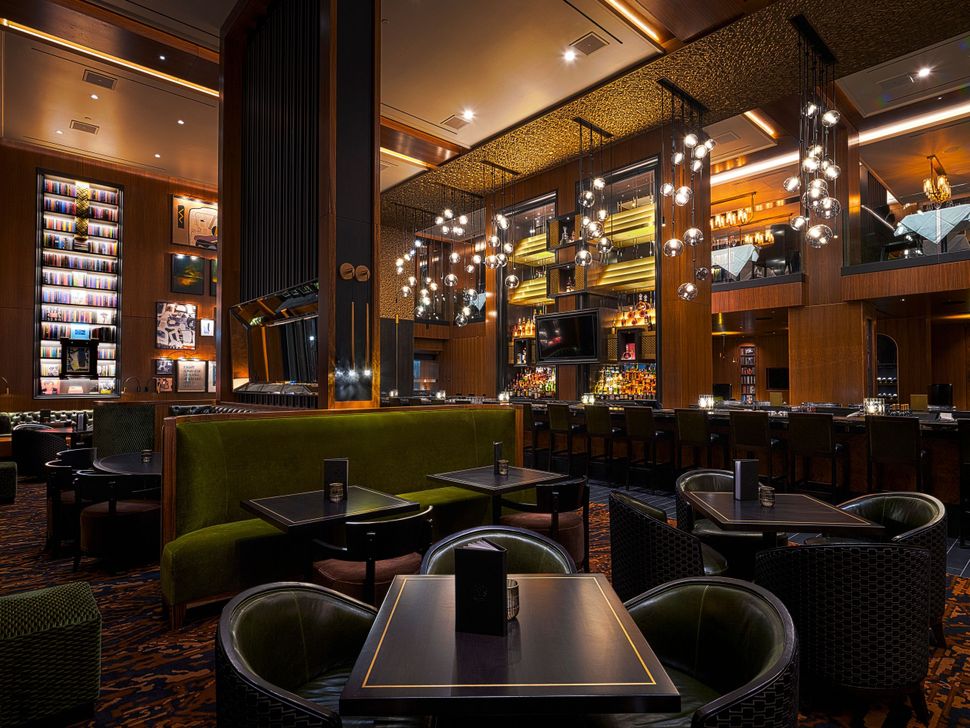 Latkes, chopped liver, and pickles no longer appear on the menu at Hy’s.

But the steakhouse chain, which just opened a gilded 18,000-square-foot flagship in Toronto’s Financial District, has heimishe roots and a very Jewish backstory — including its larger-than-life namesake, the son of Russian immigrants to Canada.

The splashy downtown restaurant – quite possibly Canada’s glitziest steakhouse – is the biggest gambit yet for the iconic 65-year-old brand, which operates five locations north of the border.

“I grew up in the restaurant business,” Neil Aisenstat, Hy’s president and CEO and son of Hy Aisenstat, who opened the first Hy’s above a women’s clothing store in Calgary, Alberta in 1955. “My dad originally launched the steakhouse to pay for journalism school at the University of Chicago.” Hy’s girlfriend – Barbara Mathewson, who had converted to Judaism before they married – ran the front of house (ironically, Barbara Mathewson was born in a small Northern Ontario town called Swastika).

Their restaurant, Aisenstat said, “was a tremendous success. On the first night, they had four guests. The second, eight guests. The third night, 16 guests. Then 32 on the fourth night. Then lines out the door.” At that point, Hy Aisenstat “abandoned his plans for journalism school,” his son laughed.

Jewish dishes may have played a role in Hy’s early success. Hy Aisenstat himself spoke Yiddish, his son recalled. “The original menus had latkes, chopped liver, kosher dill pickles, and many ethnic Jewish dishes for quite a while,” Aisenstat said.

Hy – who had never operated a restaurant – also became part of the draw. “I’m very proud of the memory of my father,” Aisenstat said. “He was a larger-than-life character and a raconteur, the type of person who would go into bar and within an hour, everyone would stand around him listening to his stories.”

Hy Aisentstat “grew up in Calgary, but traveled throughout US. He liked to eat, and loved the bar atmosphere. He came back to Calgary thinking we didn’t have any of the restaurants he saw in big American cities. Our only fine dining was in CP [Canadian Pacific Railways] hotels. He took a chance.”

As the company grew, expansions to markets like Chicago and Beverly Hills didn’t pan out; nor did a stint trading on the Toronto Stock Exchange. And while Hy Aisenstat passed away in 1988, his risk keeps paying off. At the new Toronto Hy’s, a Canadian Black Angus 32-ounce bone-in rib steak – from cows “raised on barley-based vegetarian feed and prairie grass” – commands $118.95 Canadian [about $89 US].

“Even though we’re fairly expensive, my dad always believed that the guest wants value, whether that’s the best steak you can possibly get, or the best seafood, or the best wine,” Aisenstat said. “It’s about the best atmosphere in the best location. Even if it’s pricy, there’s value.”

The new Hy’s coddles guests in a soaring space of rich wood, dark tones, and pops of color from green velvet banquettes. “Everything is custom, from the lighting to the carpets,” Aisenstat said. “The millwork and stonework are extraordinarily detailed.” An enormous rectangular bar forms the centerpiece of the room.

Even as meat-consumption habits change, Aisenstat sees a bright future for the chain he inherited. “We’re a steakhouse. I see that more as an atmosphere rather than menu-specific,” he said. “People are eating less meat at home, but when they go out for dinner, they want the experience of treating themselves to the best meat they can find.”

Behind The Scenes At Toronto’s Glitziest — And Very Jewish — Steakhouse