Chicago gets a vegan, traditional Jewish deli in ‘Sam & Gerties’ 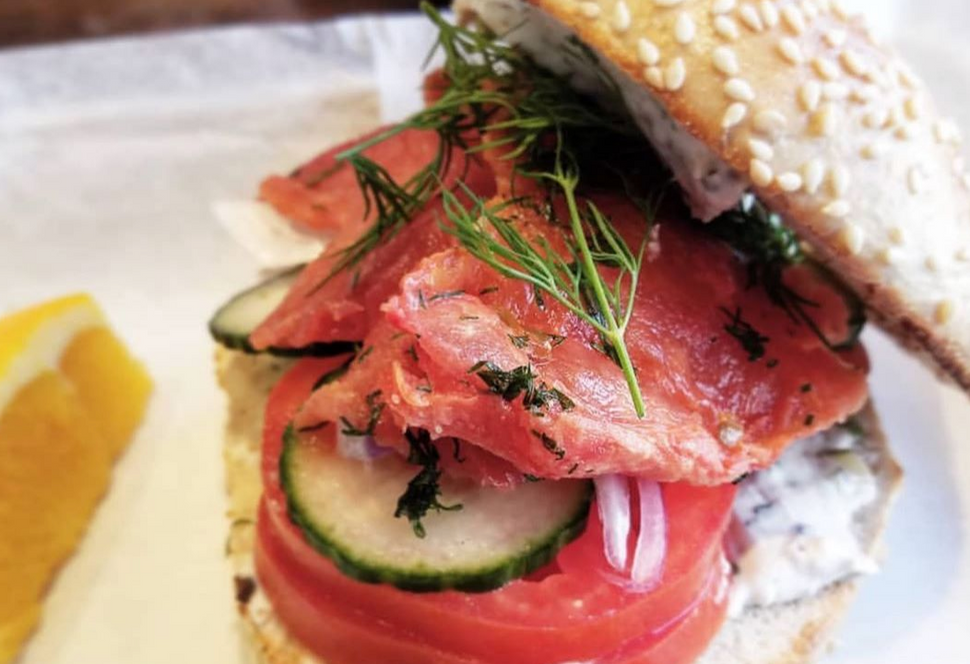 Though just a month old, Sam & Gertie’s looks like a classic Jewish deli.

But there’s a twist. Nothing in this Chicago hotspot is made with meat. Or fish. Or dairy. Or any animal products.

Welcome to what its proprietors are calling the world’s first vegan traditional Jewish deli.

“Inside the Chicago city limits, we may be the city’s only traditional Jewish deli,” Andy Kalish, the deli’s owner, told the Forward. “We just happen to be plant-based.”

That spin has made Sam & Gertie’s a smash success since its January debut. On its opening weekend, the deli’s entire menu, including knishes, corned “unbeef”, and black-and-white cookies, sold out. One couple told a local Chicago newspaper they drove eight hours from Kansas City after reading about Sam & Gertie’s in a vegan Facebook group.

“We did not expect that kind of response,” Kalish said. “Young people are telling us, ‘I’m vegan, and I’ve never been able to have this kind of food.’ People are lining up for half an hour, even 45 minutes, to get to our counter. It’s really validating.”

The deli’s popularity couldn’t have come as a complete surprise. In 2016, Kalish and wife Gina opened Kāl’ish, a vegan diner, on Chicago’s North Side. It’s become a magnet for diners from all over the city. “We get omnivores, not just vegans,” Kalish said.

While dishes like meatless fried chicken and burgers, salads and a “2na melt” are perennial hits at the diner, the Kalishes noticed their classic Reuben routinely ranked as their most popular item.

Detroit-born Kalish also yearned for renewed connection to the Jewish food and culture of his youth. “When I moved to Chicago from Ann Arbor, the access I had to Jewish culture and cuisine became limited,” he said. “And over the last 30 years, Chicago’s bagel factories and traditional Jewish delis have all but disappeared. I loved them, and I really miss it.”

While Kalish hatched the idea for a vegan deli more than a decade ago – though then Gina had nixed the idea – the timing finally felt right this year. The couple had recently closed a pizza joint they’d opened next to Kāl’ish in 2017. “That restaurant didn’t come from a place of passion,” he said. “You could feel it.”

The opposite has been evident at Sam & Gertie’s, which Kalish named for his immigrant grandparents. “At Kāl’ish, no one ever said ‘I’m Jewish, thank you’. I have been getting that at Sam & Gerties,” he said. “I’m also seeing a lot of yarmulkes and wigs.” Though the deli’s not certified kosher, Kalish said the kitchen works “with respect toward the laws of kashrut.”

What’s coming out of that kitchen might also represent a delicious future for deli at a time when questions of sustainability have been nagging at restaurateurs.

“Several components go into making something look like pastrami – meat, fat layer, spice crust. When you look at our pastrami, you see all of that,” Kalish said. “To get someone to accept that they’re eating a pastrami sandwich, it has to look like pastrami to begin with, since people usually eat in daylight and look at their food.”

The restaurant’s “läks” – its spin on lox – is made from tomatoes, unlike many carrot-based lox-type products at other restaurants. “We cure tomato flesh the same way you’d cure salmon belly,” Kalish said. ”It’s cold-cured, and packed in a salt/sugar/spice compound. We’re extracting moisture and infusing flavor.” Cream cheeses are soy-based, and come in flavors like dill pickle, smoked läks, maple-walnut and blueberry (yes, we know).

Sam & Gertie’s smoked whitefish salad is “the most complex, unique, awesome flavor we’re able to replicate,” Kalish enthused. A four-day process of “drying and extracting” transforms hearts of palm into “whitefish” before it gets smoked in Sam & Gertie’s kitchen.

Matzo balls don’t yet appear on Sam & Gertie’s menu, but will soon; it took Kalish and his team months to perfect a recipe without eggs. An amalgam of “seeds, starches, and a secret ingredient” finally worked, and the restaurant will serve matzo-ball soup starting around Passover.

While Sam & Gertie’s only open early on weekends for now, the deli will expand hours next week with a Shabbat dinner – hosted by a local rabbi – which Kalish wants to make a Chicago tradition. The deli will also launch nationwide delivery of salads and sandwich kits through its website for Passover.

“I love Jewish deli,” Kalish said. “It’s wrapped in food, song, and tradition. I live in a very secular world on the north side of Chicago, and I missed Jewish culture.”

Chicago gets a vegan, traditional Jewish deli in ‘Sam & Gerties’