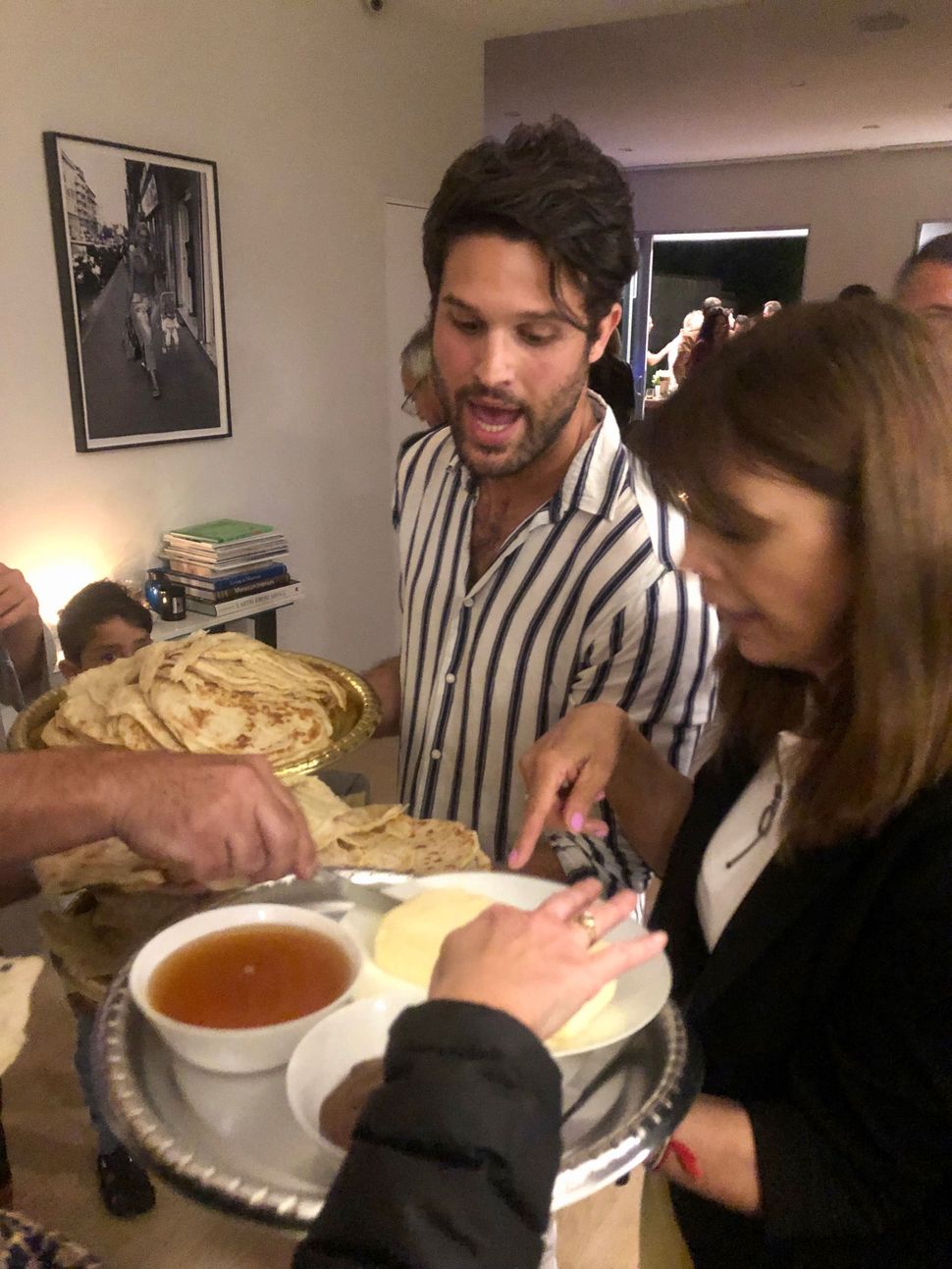 If you think seder is tough on Zoom, try mimouna, the Moroccan festival that marks Passover’s end.

In normal times, Moroccan Jews throw open their doors and host friends and neighbors with tables full of sweets: candied fruits and vegetables, pastries drenched in syrups, all varieties of cookies and cakes. It’s too many people and too much food, the exact opposite of #quarantinecuisine.

But here we are, in the time of making do.

You could do a lot worse than spending this mimouna, which begins the evening of April 16, mastering this recipe for mufletas. These honey- and butter-drenched yeasted pancakes are the centerpiece of the holiday. They have simple ingredients but a complicated technique that involves cooking one on top of the other to create a single layered pancake.

Last year at this time. I ate magnificent mufletas at a Beverly Hills mimouna celebration hosted by the Los Angeles-based (and Israeli-born) television producer Maor Azran. The tables were burdened with all sorts of food, a D.J. pumped out Middle Eastern techno-pop, and Maor and his mother, Shula, wove through the dense, happy crowd with platters stacked with mufletas, pushing seconds, thirds and fourths on guests, who didn’t resist.

Shula Azran is from Israel, but her parents are Kurdish and Persian. She learned to make mufletas, as did Maor and his sisters, from their father’s mother, Ada Azran, a native of Marrakesh.

This is their recipe. But a word of caution to those celebrating mimouna in small, quarantine-friendly numbers. This recipe makes about 40 pancakes. Do you have any idea how many mufletas a person can eat after not having bread for eight days? As it turns out, a lot.

In a large bowl, blend the first five ingredients together until you have a very soft, bread-like dough. You may need a little more or less flour to achieve the right consistency.

Cover the dough with a big towel and let rise for about 15 minutes. But again, if it needs more — let it be.

Oil your hands. Create little balls, about 2 inches in diameter. Place all the balls on an oiled tray for another 15 minutes, no need to cover.

Oil your work counter. Pull, press and spread each dough ball until it is a very thin, delicate circle, about seven inches in diameter. Don’t worry if the first few don’t work out well, keep going.

Heat a large skillet on your stove. Add about a tablespoon of butter, making sure you have more nearby. Add one mufleta and let it be for a minute or two. Flip it, add butter on top of the mufleta, then lay a new mufleta on top of it. Flip it again, add more butter and another mufleta, and do it again until you get about 10 or 15 of them in the pan. They all should be brownish. Your first round is done. (Except for the first mufleta, they are all cooked on just one side). Then you do it again until you have 15 more — and again until you use up all the dough.

You can make them individually too, stacking as you go — but that’s not tradition.

Serve the stack of mufletas with butter and honey for dipping.