There was a lot of experimenting going on when I Zoomed with Jay Sanderson.

Sanderson is president and chief executive officer of The Jewish Federation of Greater Los Angeles. As Michael Janofsky reported in his story on Sanderson earlier this week, Sanderson is facing the daunting task of meeting the needs of a community hit hard by the coronavirus.

He is also reeling from the death of his twin brother Jeffrey, who died from Covid-19 in April.

Despite, or maybe because of, all that hardship, I decided to conduct my Zoom interview with Sanderson while he… cooked.

Sanderson and I have known each other for over two decades. Sometimes the relationship has been testy– he ran the Federation, I ran a newspaper that often reported on Federation in ways that raised hackles. But the best part of our fights were the make-up meals, usually at restaurants (remember restaurants?) that we would painstakingly choose in back-and-forth texts and e-mails. Food was our salve. I knew it would still be, now.

So we experimented with a serious discussion-slash-cooking demo. In this crazy time, why not? And you know what? I think it worked.

When I Zoomed with Sanderson on May 21 in an event sponsored by the Los Angeles Federation and The Forward, he was in his kitchen. As we talked, he made what he called his “Beet Variations.” First up was a beet martini flavored with a rare French caraway liquor. Next was borscht, or beet soup, garnished (genius!) with dehydrated sauerkraut.

While cooking, Sanderson laid out the challenges facing the Jewish community during, and after, the pandemic.

Bottom line: Jewish organizations, including Federations, are being challenged as never before by this pandemic, Sanderson said, but the ones that emerge stronger will use the pandemic as an opportunity to innovate, change and grow. 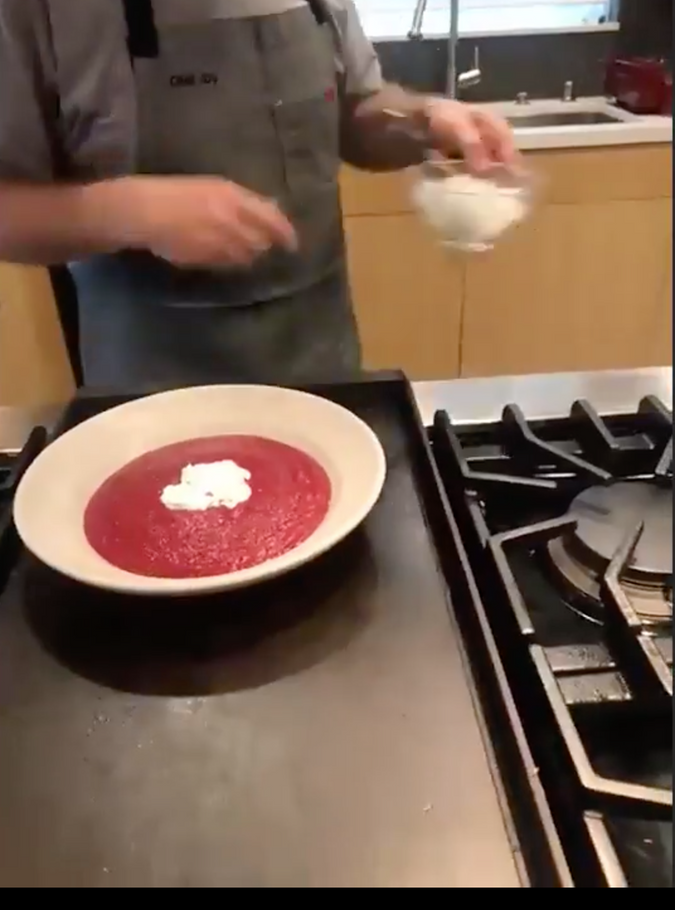 Fill a mixing glass with ice, vodka, shrub, the liqueur, and stir vigorously. Strain and pour in the chilled martini glass.

The Beet Soup with Caraway

Roast one pound of beets in a roasting pan 375 degrees until tender Peel and chop. Set aside.

Heat oil in a pot over medium heat. Add caraway seeds, stir until they start popping. Add leeks. Stir. Add a cup of water to keep the seeds from burning. Cook until the leeks are soft. Add beets and vegetable stock. Cook 15-20 minutes to let flavors meld.