Decorate your Sukkah with bread? The story of kaak

When your Yom Kippur break the fast bread becomes your Sukkah decoration, you know that you are looking at kaak, Arabic for cookie.

These double-baked crunchy mini-rounds have a long shelf life and are generally pareve, they appear at celebratory moments of Sukkot, Rosh Hashanah, Yom Kippur break the fast and Shabbat brunch. Easy to carry to synagogue or to neighbors, kaak make a great accompaniment to salads, spreads, or coffee and tea. 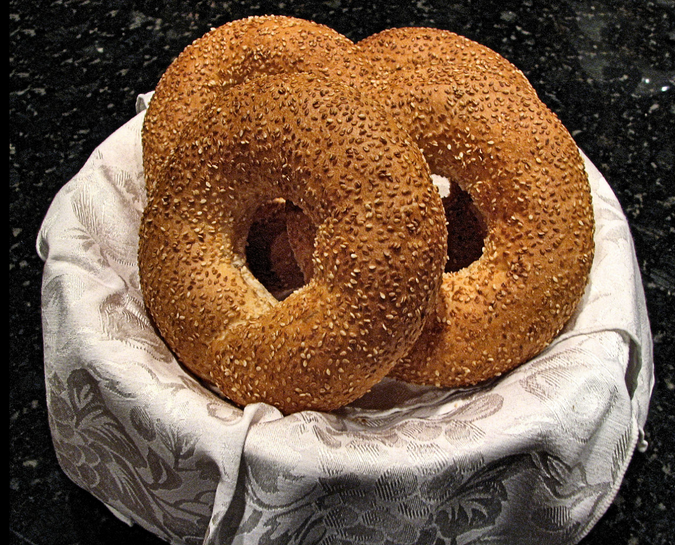 Rabbi Shelton Donnell comments that they are the perfect complement for the kashkaval, kaseri, and feta cheeses served at the end of Yom Kippur in Sephardi homes. At Passover, when almond flour substitutes for regular flour, they are known as kaak bi-loz. Weddings, brit ceremonies, and b’nai mitzvah festivities feature kaak as well. Topped with sesame or anise seeds representing fertility and the performance of multiple mitzvot, the dough circles symbolize eternality, the cycle of life, and the seasons of the year.

Varieties of kaak may be found all over the Middle East among Jews and non-Jews. They are ubiquitous in Israel today. My brother-in-law’s kibbutz store stocks packaged kaak that is often snacked on with morning tea. In Sephardi traditions the biscocho (biscochicos) rounds may be more cookie-like, possibly butter based, sweetly flavored with anise, orange, cinnamon and/or vanilla.

“Though they look alike, biscochicos and kaak taste totally different!!!,” wrote Nadine Calmon Lipman, a contributor at the “Sephardi Cuisine!” Facebook page. :”Biscochicos are sweet, in my experience, whereas kaak are not. My mother in law’s family is from Turkey and she cannot eat my Syrian family’s kaak without ‘complaining/comparing’ the two; the first time I ate one of her biscochicos, I was sooo disappointed that it wasn’t kaak, which I grew up with.”

According to Gil Marks in his “Encyclopedia of Jewish Food,” families pride themselves on their own recipes variations and secretly guard them from generation to generation.

This mini-bread also has ancient roots. According to some, murals at the Temples of Thebes and Memphis (1549/1550 to 1292 BCE) illustrate preparation of kaak. These bore images of the sun goddess Athon and may have been used for amuletic purposes. Archaeologists in Austria found 3000 year old charred bagel shaped breads (dating to 960-900 BCE). The Babylonian Talmud (Sixth Century CE) mentions a kaak bread, probably from the Aramaic word for teeth. In 1226 the Kitab Wusla al Habib cookbook from Baghdad included several kaak recipes for ring shaped breads.

I can see how kaak would be an attractive and unusual decoration for a Sukkah, particularly if you have a lot of stale ones on hand. Sukkot’s important messages are the value of diversity expressed through the four species of the lulav, hospitality, the appreciation for bountiful harvests, the openness of a leafy ceiling. Kaaks cross boundaries, religions, and centuries — and greet each guest with a bit of joy.

Here’s is my favorite Kaak recipe.

Rabbi Deborah R. Prinz lectures about chocolate and Judaism around the world based on her book, On the Chocolate Trail: A Delicious Adventure Connecting Jews, Religions, History, Travel, Rituals and Recipes to the Magic of Cacao. She co-curated the exhibit “Semi[te] Sweet: On Jews and Chocolate” for Temple Emanu-El’s Herbert and Eileen Bernard Museum, New York City, now available to travel to your community. Most recently she has launched the chocolatebabkaproject, an exploration of celebratory breads.

Decorate your Sukkah with bread? The story of kaak