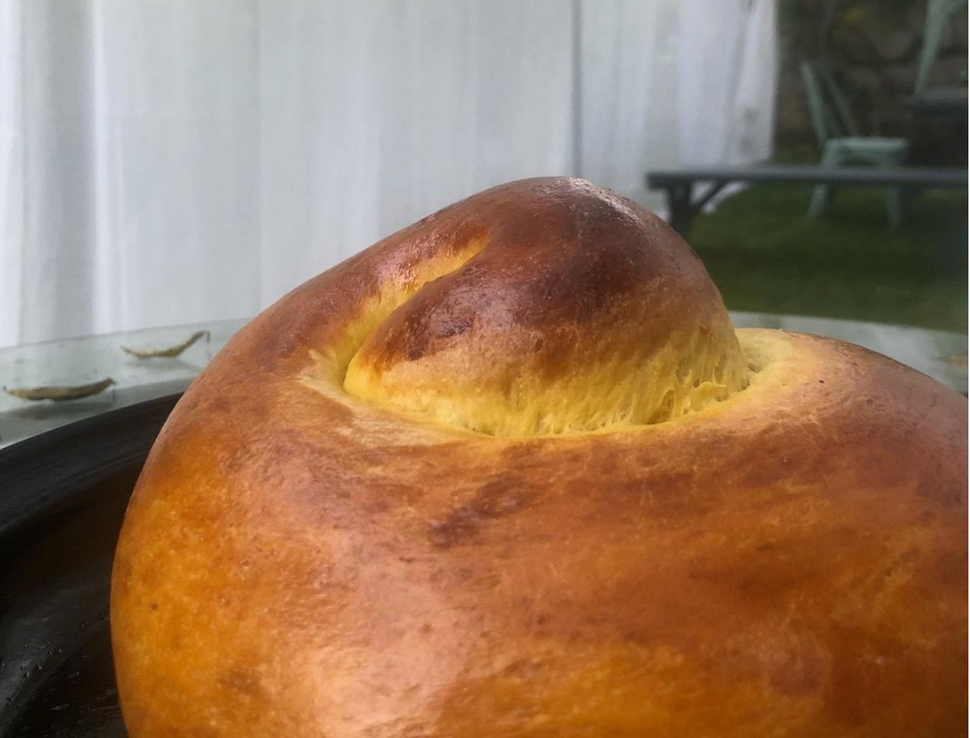 I was the kind of kid who rushed out to buy round corn chips and orange Gatorade and square-pan pizzas. Any food with the bold word NEW! on the label sang to me. I wasn’t dumb. I knew that manufacturers just saw a tweak in the color or shape as a marketing ploy, a sucker’s bait. And time after time, I happily bit.

At first glance, the round challahs of the High Holidays might seem to be no more than the ritualized version of a General Mills-like strategy. How could a bread that is braided 11 months of the year suddenly taste different the month it is made round? Eggs are eggs, flour is flour, yeast is yeast, etc., right? But, somehow, the challahs of the High Holidays — domed crowns of golden dough, studded with raisins, sitting atop a holiday table like a princess pillow — do taste different.

I look forward to them each year, and my heart leaps at the rows of them that begin to appear in bakeries and kosher marts this time of year.

The usual braided challah shape is certainly noble enough. Scholars trace its origin back to a time when the Gentile women of northern Europe offered locks of their braided hair to the Teutonic goddess Berchta. Eventually, the hair offerings were replaced by braided loaves. Perhaps not coincidentally — no one knows such things for sure — Northern European Jews made a potato challah called berches.

Over the years, Jews invested their braided bread with symbolism of its own. The 12 humps that result from braiding two loaves of bread are said to represent the 12 loaves of showbread (lehem hapanim) in the Temple.

The round challah of the New Year carried its own weight of extra-alimentary meaning. Its shape is symbolic of a well-rounded and full year. Its numerous raisins symbolize a year of plenty. Its tinge of sweetness symbolizes…sweetness. The round challah doesn’t exactly strain our skills of deconstruction: It wears its symbolism on its broad, shiny surface.

If you’ve ever made regular challah, or bread, you will likewise have no problem making it round. The pumpkin ensures that even without eggs, the bread will turn out moist, rich and subtly colored. The Jews of Turkey make a similar holiday bread, pan de calabaza, scented with ginger and cardamom.

Of course, you can use both recipes the rest of year to make your challah in braids. Or you can divide the dough up in loaf pans. But when Rosh Hashanah rolls around, see if you can’t resist the change to the circular loaf. It is the time of year we’re allowed to change, to become sweeter and more whole. What a simple way to remind ourselves.

1) In a large bowl, dissolve the yeast and brown sugar in warm water. Let sit 10 minutes to proof.
2) Add the oil, salt and pumpkin and 2 cups of flour. Beat vigorously a few minutes. Add additional flour, up to 5 cups, and blend well.
3) Knead the dough on a floured surface for about seven minutes, adding a little additional flour to prevent the dough from sticking.
4) Place the dough in a lightly oiled bowl, cover with plastic wrap, and let rise in a warm place until doubled. Takes about one to two hours.
5) Punch down and knead lightly. Divide the dough and roll into two 12-inch long ropes, tapered at the ends. Coil each rope. Place them on an oiled cookie sheet. Cover with a lightweight towel and let rise until double. Takes about 45 minutes to one hour or more.
6) Preheat the oven to 375 degrees. Brush the tops of the loaves with the glaze. Bake about 30-45 minutes, or until loaves sound hollow when tapped.

Variations:
To make fresh pumpkin purée, seed a small pumpkin, cut in wedges. Roast at 400 degrees until very soft, about one hour. Puree in food processor or blender.
A dash of ginger, nutmeg, cardamom and cloves can be added to the dough in Step 2.
The dough can also be shaped into rolls or braided.

A version of this story first appeared in The Jewish Journal on September 18, 1997 and at foodaism.com.