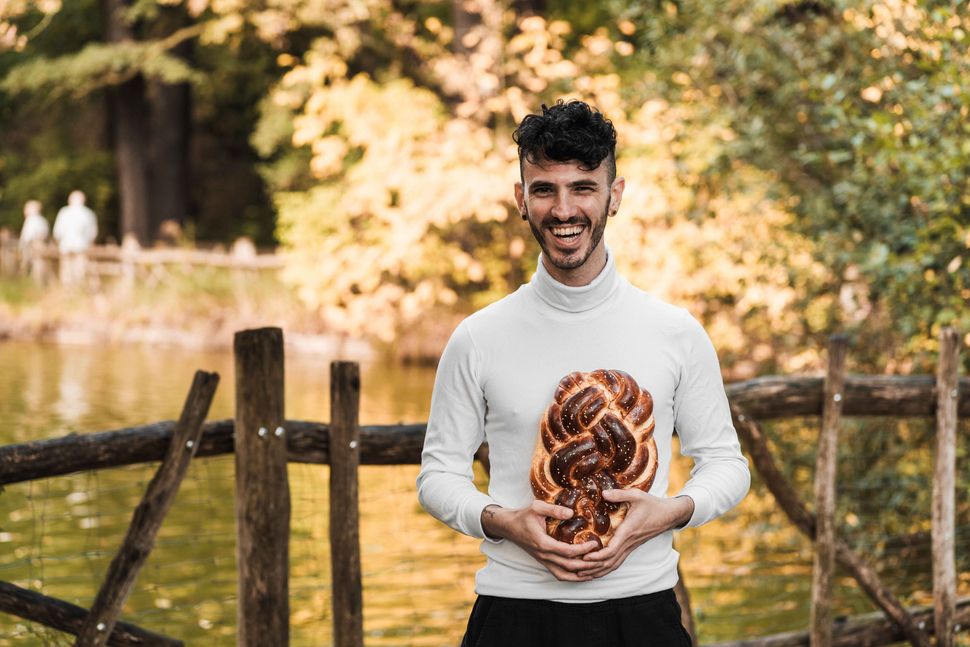 How do you make a Challah Prince?

Start with an Israeli born in Tel Aviv named Idan Chabasov, 35. Place him in Berlin with water, flour, yeast, sugar, and egg yolks. Mix with experience as a social media marketer. Add four years in art school in Tel Aviv specializing in animation. Leave to rise, isolated, during a coronavirus pandemic, allowing ample time and space for creative experiments with challah dough. And voila, or rather, challah — you get a challah-baking sensation with almost 25,000 Instagram followers. 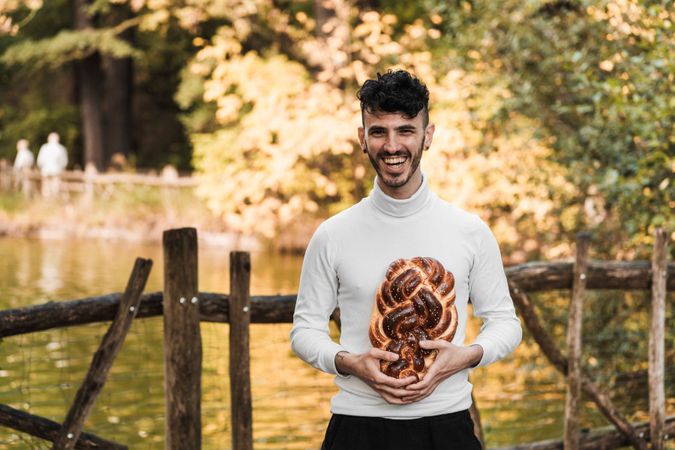 But Chabasov has some special ingredients that make him stand out as arguably the most-watched challah baker on social media: He’s gay. He has a dozen tattoos all over his body, each representing a spiritual milestone in his life (“breathe” for his meditation phase, mystical Hebrew letters for his kabbalistic phase, and of course, a challah loaf). He reconciles his bad boy image with what he considers his most sacred ingredient: love for Judaism.

“For me, Judaism is to be connected to spiritual principles that help you connect to yourself and a higher power,” he said during a special challah tutorial in my Berlin kitchen (see video).

I’ve met Chabasov several times on the communal Shabbat-dinner circuit in Berlin, hosted oftentimes by Israeli couples involved in Jewish outreach. (Berlin is home to an estimated 100,000 Jews, among them 20,000 Israelis.) 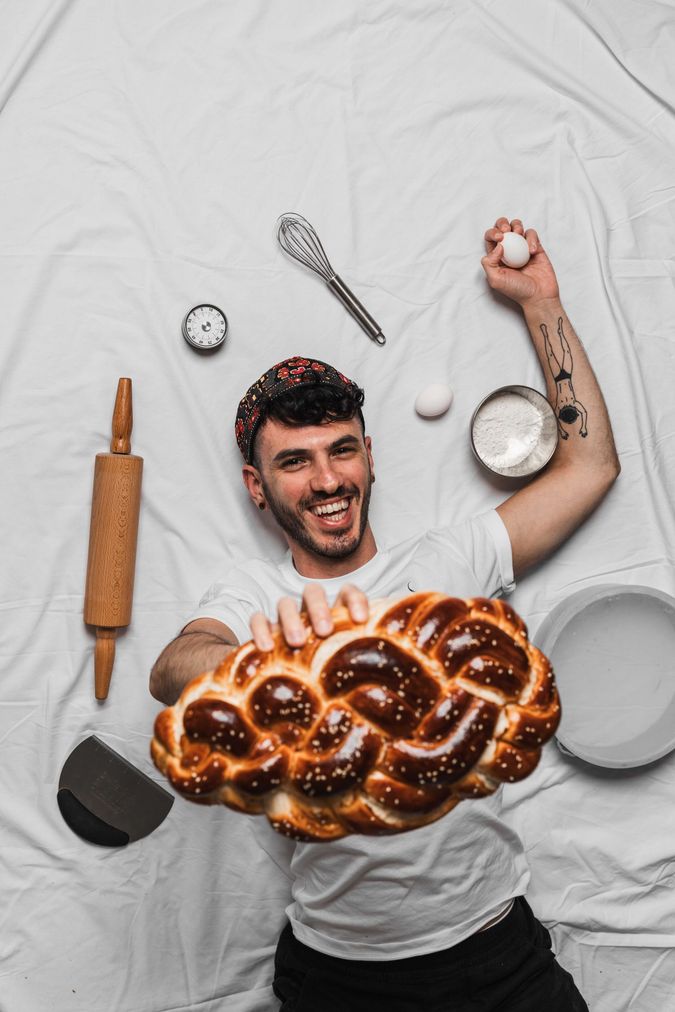 He’s not your typical Yiddishe Mama —actually, he’s Sephardic—half-Buchkaran and half-Turkish. Maybe that’s why he instills faith in his followers that they too could bake a breathtaking challah. If he could do it, anyone can. His animated touches turn his Instagram stories into eye-candy. Even on social media packed with Top Chef-worthy sourdoughs, Chabasov’s designs stand out for their beauty and innovation.

At heart, though, he’s a traditionalist — he loathes bakers who mix sweets into their challah—that’s reserved for his sufganiyot. And like that Hannukah treat—he’s gushing Jewish sweetness within.

“People tell me: I never dared to bake challah because I was so scared, but now, thanks to you, I bake challah every week, and it changed my life,” he said. “It’s so magical: you just flour, water, sugar, yeast, you just mix it together and it’s a piece of art.”

A year since arriving in Berlin in 2014, he baked challah every Friday as a hobby. This year, while alone in his Berlin apartment during the lockdown, he scoured YouTube for braiding tricks and then started making up his own. He now teaches how to braid challah with any number of dough strings, often turning and twisting them to make every new shapes, like circles and hearts. He’s like the ultimate hairstylist—for challah!

His recipe is actually bare bones. In making our challah, he simply threw into a bowl an entire 500-gram sack of flour bought from a local discount supermarket, along with a packet of yeast, water, oil, and a touch of sugar and salt (and egg yolk for glazing). But the way he touched the dough was unusually sensual. He took his time kneading it (although he often uses a mixer) and passionately, patiently, lovingly rolled, touched and twisted its parts to turn them into a curvy, braided loaf. The taste was classic, but with that homey quality no bakery could offer. 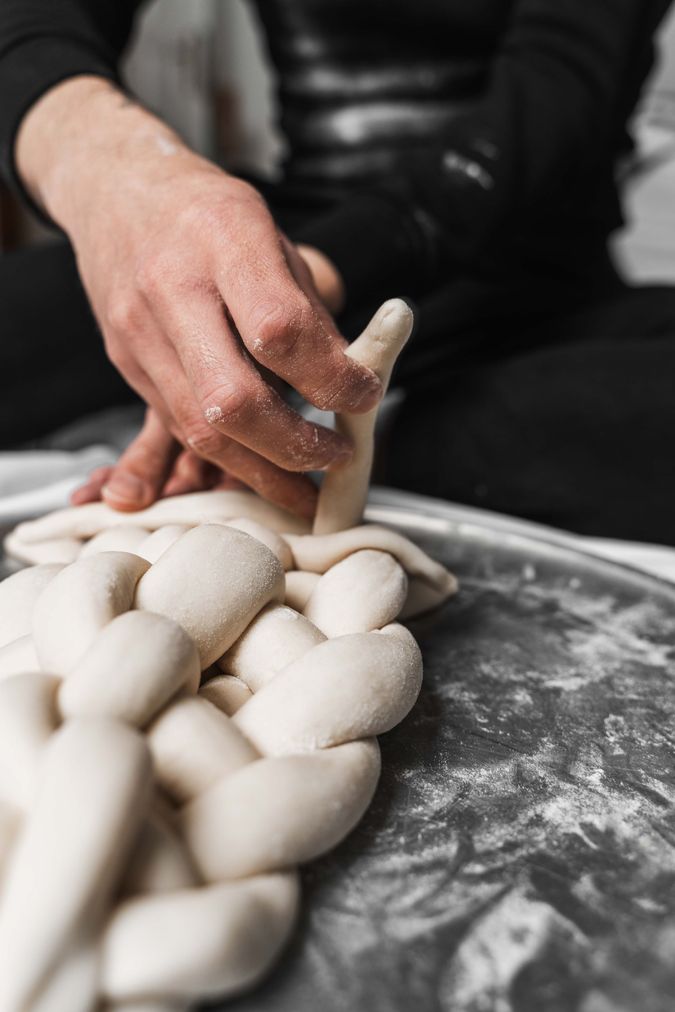 People told him to open a bakery, but he wanted an even wider reach. Now, he’s holding live online workshops all over the world—and many Jewish organizations, he said, are just as interested in his story as his bread.

Like many Israelis before him, Chabasov came to Berlin to find himself as an artist, and eventually found love with a German man. The marriage didn’t last long, mostly due, he said, to mentality differences. But he never strayed from his core, and every Friday night, he’d find Jewish hubs where he could say kiddush—something he rarely did in Israel.

Of course, he’d go to Berlin’s notorious gay-friendly nightclub, Berghain, after almost every Shabbat meal, sometimes handing out pieces of challah to sweaty clubgoers. He doesn’t miss that life anymore, fortunately, because nightclubs are closed in coronavirus times. Challah has cured his nightlife addiction. His Jewish soul has risen.

“I was so not happy in my previous job as a marketing expert,” he said of the “day job” he quit in September. “I learned a lot about the platforms, how to promote myself and get better in what I’m doing—but you’re not happy. You earn a lot of money. You think this money served me and thanks to this money I do what I want—but it’s just a story that you tell yourself. Why not earn money from the things you love?”

He started the “Challah Prince” account already back in January 2020. “After three months, I got five thousand followers,” he said, “and I realized that people are asking for me to create more content. My content is actually based on what my audience asks of me. It’s very hard to get creative by yourself.”

His next project is to encourage “hafrashat challah,” the process of separating and discarding a piece of challah—like an offering—for good luck, including luck in finding a mate. And while now he prefers Israeli men, he’s enjoying the single life—unless challah can be considered a mate.

“I got a message once that really made me cry about a father who just lost his job because of Corona times and he told me every Friday he bakes challah and it brings so much joy and happiness to his family,” he said. “When I see message like that, I know I’m doing my job, my purpose in life. I feel like this is my essence.”