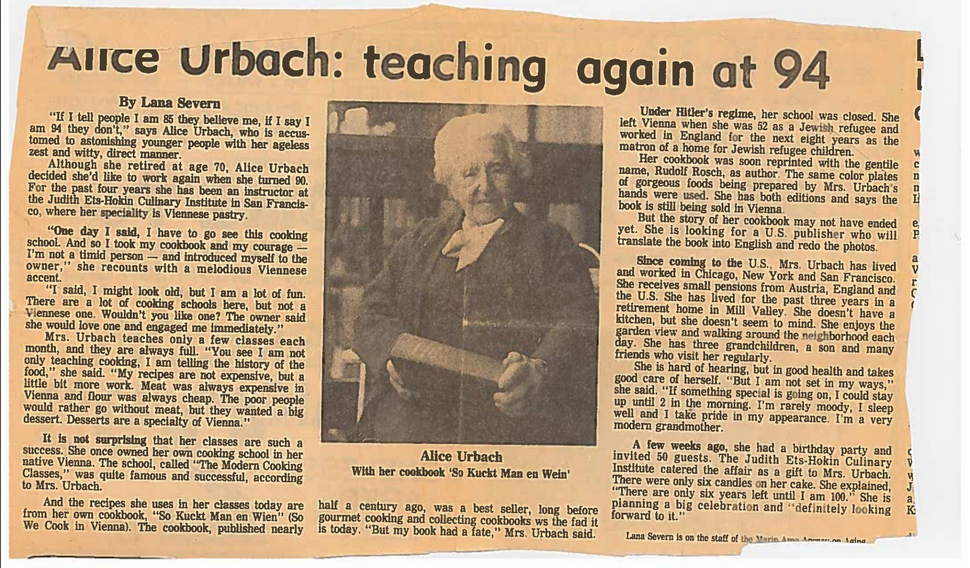 An article featuring Alice Urbach from 1980

Growing up, there were always two copies of the cookbook “So kocht man in Wien!” (That’s How You Cook in Vienna!) in the German historian Karina Urbach’s family home.

There was the original, written by her grandmother, Alice, first published in Vienna in 1935. Some 500 pages long, the book is encyclopedic, an amalgam of traditional Viennese recipes with advice for the modern housewife. There was also a spurious later edition, containing about 60% of the same recipes but published under a different name: Rudolf Rösch.

In 1938, Alice Urbach was running a bustling cookery school at Goldeggasse 7 in Vienna near the Belvedere Palace when the Nazis came to power in Austria. She survived the Holocaust in England, running a boarding house for Jewish refugees in the picturesque Lake District. Before her flight into exile, as was the fate of Viennese Jewry, Alice was robbed of her possessions. For an insulting fee, one of the items she was forced to sign over was the copyright to “So kocht man in Wien!”. Her cookbook was Aryanized. 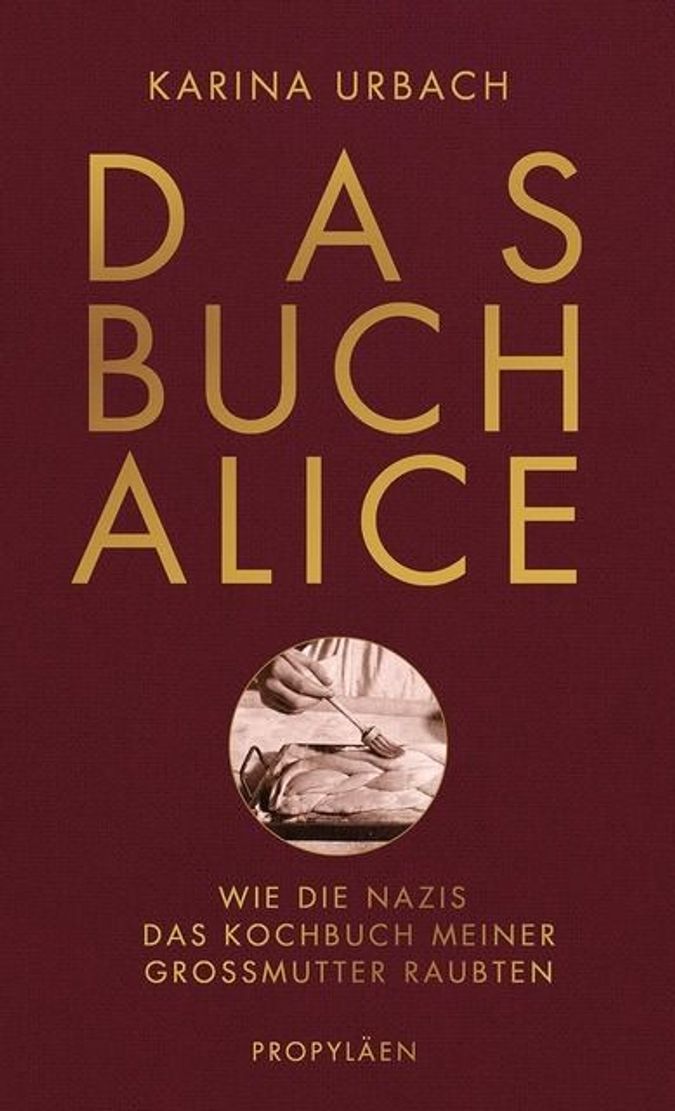 The story of “So kocht man in Wien!” is the subject of Alice’s granddaughter Karina’s new work of family history “Das Buch Alice” (Alice’s Book).

“I always knew the cookbook had been taken over by another author,” Karina said in a phone interview from her home in Cambridge, England.

Alice had always lamented the book’s Aryanization and wanted it back. When her granddaughter began to look into the book’s fate, the original publisher told her they didn’t have any papers related to the Nazi period, and the matter was not researchable. This gave her the impetus, she said, to “solve the riddle” of these two cookbooks.

Alice Urbach always wanted to cook. Brought up in a well-to-do, distinguished Jewish family in fin-de-siècle Vienna, she felt constrained by the roles of daughter and then wife.

Her father, said Karina, “looked down on things like cooking. That was left to the staff and not something you wanted for your upper-class daughter.”.

But Alice wanted to become a cook in part to impress her father, who rose out of the Bratislava ghetto to became a successful textile merchant, Jewish communal politician, and columnist and was something of a gourmand.

When her husband died in 1921, Alice had the freedom to pursue her dream of becoming a professional cook.

According to Karina, Alice considered her marriage to a local doctor, “the greatest mistake of her life. She did it to please her parents.” 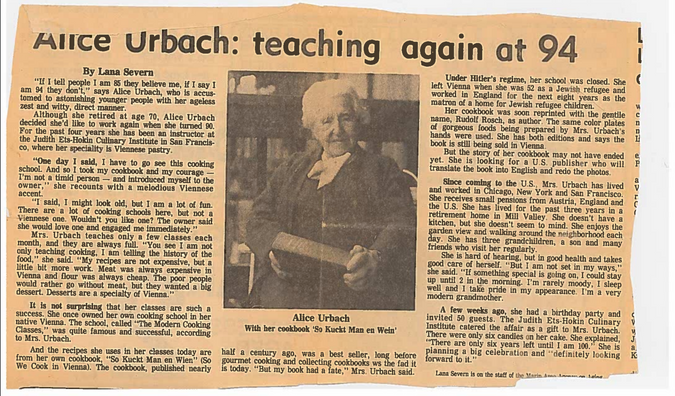 An article featuring Alice Urbach from 1980

The early 1920s were turbulent and emancipating times for Alice and also Austria, a country beginning to get back on its feet after defeat in the First World War. A recovering economy meant an end to rationing and more food on the open market, creating the underlying conditions that made it possible for Alice to teach people how to make the wonderful confections and creations one still sees in the windows of Demel and the Hotel Sacher.

“So kocht man in Wien!” was in many ways forward-thinking considering the constraints of its time, Karina said. Alice praised the housewife and her contribution to the economy, stressed the importance of a nutritional diet for children, and asked heads of the household to consider the emotional toll placed on cooks and cleaners in her book.

Much of that wisdom was expunged when it was Aryanized and re-published under Rudolf Rösch’s name, as were recipes deemed too Jewish: Omelet Rothschild and Jaffa Cake.

Publishers, Karina explained, desperate to keep their bestsellers on the shelves, rushed to find “Nazi stooges” to attach their names to de-Judaized books. “So kocht man in Wien!” was one such work.

After the war, Alice left England for the United States where her son was already living, residing by turn in Chicago, New York, and San Francisco.

She was thankful for the refuge the States provided, as many European exiles were, Karina said, yet continued to be defined by Vienna and her Viennese experiences.

Alice fashioned herself in America as a culinary teacher once more, with newspaper profiles from the 1980s noting she continued to instruct people in the ways of the Viennese kitchen at the age of 94 at the Judith Ets-Hokin Culinary Institute in San Francisco. The recipes she taught were those she set down in “So kocht man in Wien!”.

“I completely underestimated her,” Karina said of her grandmother. “I had no idea what she had been through, how courageous she was: to look after 25 children in England during the war and then to rebuild your career from the bottom up” in America. “I had not realized the resilience and the courage. She never bragged about what she had done. She was very modest and humble.”

Preheat the oven to 400°F. Place beaten egg yolks, sugar, milk, and flour in a heavy-bottomed saucepan and cook over low heat, stirring all the time, until thickened. Set aside. In a bowl, beat egg whites until stiff peaks form. Fold gently into the yolk mixture. Generously butter three oven-proof dinner plates and put 1/3 of the mixture on each plate. Do not spread it all the way to the edges. Bake for around 15 minutes until done. To serve, spread one omelet with strawberry jam. Place the second omelet atop the first and spread with jam. Place the third omelet atop the second and spread with jam. Cover the omelet tower with whipped cream and serve at once.

Preheat the oven to 400°F. Peel, core, and thinly slice the apples. Brown the breadcrumbs in 2/3 cup melted butter; set the remaining butter aside for use in assembling the strudel. Place the first layer of filo flat on a dampened cloth. Paint lightly with melted butter. Lay a second layer of filo on top of the first and brush again with butter. Sprinkle with toasted breadcrumbs. Place the apples, sugar, cinnamon, and nuts (if applicable) in the center of the dough. Roll up, tuck in the ends, and lay seam side down on the baking sheet. Brush the strudel with butter and bake for around an hour.