A Jewish deli pop-up in LA with a surprising secret ingredient: pork 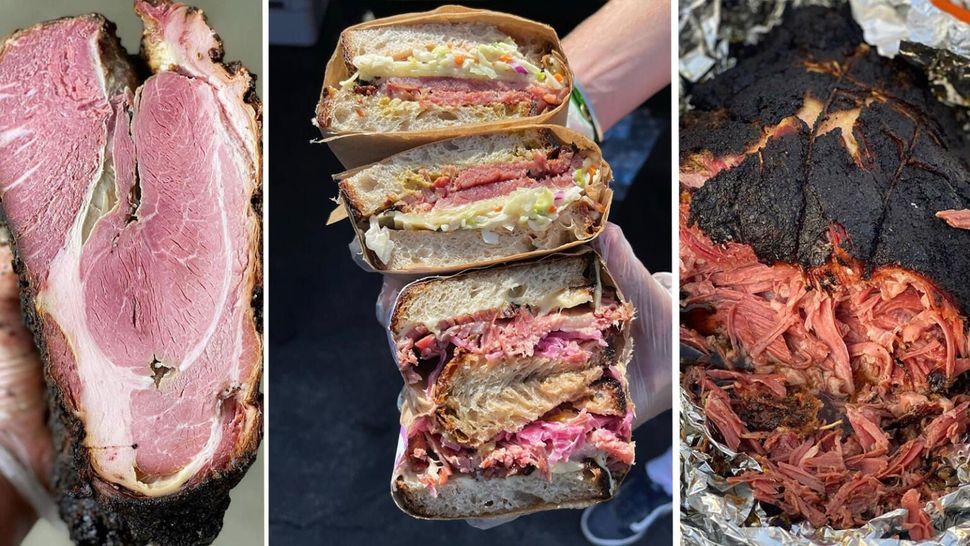 Pork sandwiches from ‘The Bad Jew.’ Courtesy of Rebecca King

She has done so since her days at Jewish summer camp. “We [my friends and I] were like, ‘We want to be bad Jews! We want to get bacon,” she said recently via phone interview. “I just remember always, like, calling myself a bad Jew… growing up, if you ate something that wasn’t kosher, we’d be like, ‘Ooh, I’m a bad Jew.’”

In 2018, that love for being bad — and for pork — birthed one of Rebecca’s current food concepts: The Bad Jew, a deli pop-up based in Los Angeles. Naturally, The Bad Jew only serves corned pork and “porkstrami,” a culinary, non-kosher play on pastrami. The porkstrami creates a flavor profile for a Jewish deli sandwich that is quite literally unimaginable for some observant Jews.

“[Pork is] naturally sweet and the fat melts in your mouth a little bit more than beef fat does … and it holds on to like the brine spices and the sugars and the salts really well,” King said. “It’s insane. It’s so delicious.”

Rebecca has strong connections to her Jewish identity and upbringing. As a child, she said Jewish prayers and celebrated the holidays with family.

“It’s just about being together with family, passing down traditions from your home… That was what was so special to me,” Rebecca explains. “And I went to Jewish summer camp… that’s what I loved about Judaism growing up: all the songs and everyone wanting to get together, and it was always happy moments.”

“Even the shivas were fun,” she said, laughing. “I know that’s kind of dark, but they were.”

But as she grew older, the more religious aspects of Judaism gave way to what she calls a “casualness,” focused primarily on food. Ironically, porkstrami is now something that most strongly connects Rebecca to her Jewishness.

“If [keeping kosher] is something that makes you feel connected to Judaism, then do it. If you feel like breaking it, you’re more than welcome. But if you don’t, then do whatever feels right for you,” King said. “That’s what I love about Judaism. I’ve talked to rabbis like… however you feel connected to God or to the religion or, or maybe not even God, or just the religion or traditions, whatever. You can kind of just do whatever feels right.”

Rebecca even has roots in the Jewish deli tradition. The Cleveland native grew up eating at Corky and Lenny’s, a long-running Jewish deli owned by a distant cousin. (Of course, her order of choice was the non-kosher ham steak.) After interning at restaurants while simultaneously working in commercial real estate, Rebecca began working at Pop’s Bagels, a Jewish-owned bagel pop-up in Los Angeles.

So when she finally decided to launch her own concept in 2020, The Bad Jew and its logo — and that strong connection to Jewish culture — was already in her head.

“I think I’ve been provocative my whole life,” King said. “And while I’m aware of how provocative it is, it was just meant to be silly and funny.”

A post shared by The Bad Jew – Rebecca King (@thebadjew)

That silliness, and modern Jewish food, has resonated with other Jewish Angelenos.

“[The Bad Jew] makes me feel like I’m connecting with a lot of other Jews that ate the same way that I did growing up,” she said. “I’ve met so many Jewish people in LA that I would not have met otherwise, that are like, ‘I love what you’re doing. I connect to this so much.’”

According to a 2020 study of American Jews from the Pew Research Center, it’s unsurprising that The Bad Jew might speak to more progressive Jews. According to the study, U.S. Jews are less religious than American adults overall, with only 21% of respondents saying that religion is “very important” to them. In turn, fewer than 17% of U.S. Jews reported keeping a kosher home. Even so, the study found that a majority of American Jews still connect to Judaism culturally, with 72% of U.S. Jews engaging in activities like cooking Jewish food.

But statistics do not concern Rebecca so much as the big plans she has for The Bad Jew.

“I just want the meat to be in grocery stores,” she says. “I want it to be in other delis. I want it to be available nationwide … What’s next realistically is I think I’ll get a co-packer and I’ll be able to work on my wholesale product.”

A post shared by The Bad Jew – Rebecca King (@thebadjew)

Until then, The Bad Jew will be found in short-term residencies all across Los Angeles. On Sundays, The Bad Jew has a tent in Smorgasburg LA, a weekly open-air market. On Fridays and Saturdays, Rebecca’s other pork pop-up, Porcine, serving pork chops in addition to porkstrami from The Bad Jew, is hosted in The Mar Vista. If you get lucky, you might just run into The Bad Jew collaborating with other food pop-ups — thus far, Rebecca has used her porkstrami in pop-ups representing Cambodian, Mexican, Thai and Italian cuisine.

At the end of the day, King’s primary focus is making good food, which is why she’s considering utilizing her “really yummy” turkey pastrami recipe to add a new sandwich to the menu.

—
The post A Jewish deli pop-up in LA with a surprising secret ingredient: pork appeared first on Jewish Telegraphic Agency.

A Jewish deli pop-up in LA with a surprising secret ingredient: pork