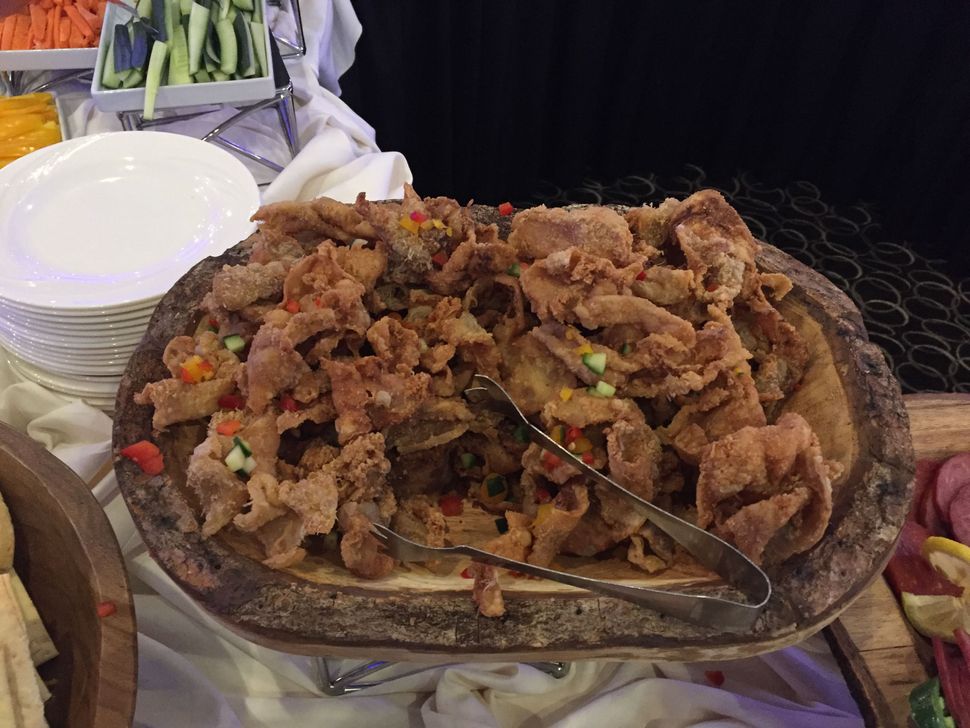 A platter of traditional gribenes

Gribenes are back. Those crispy, golden, fatty and slightly grotesque pieces of chicken skin fried in chicken fat have not returned to your local deli, but to your mass market snack aisle.

Knobby, gnarled and often with a bit of feather attached, they were once a beloved part of Ashkenazi cuisine. Now, several startups have started selling bagged variations of “Chicken Chips” or “Chicken Skin Chips.”

But make no mistake, these are gribenes, back from the dead. 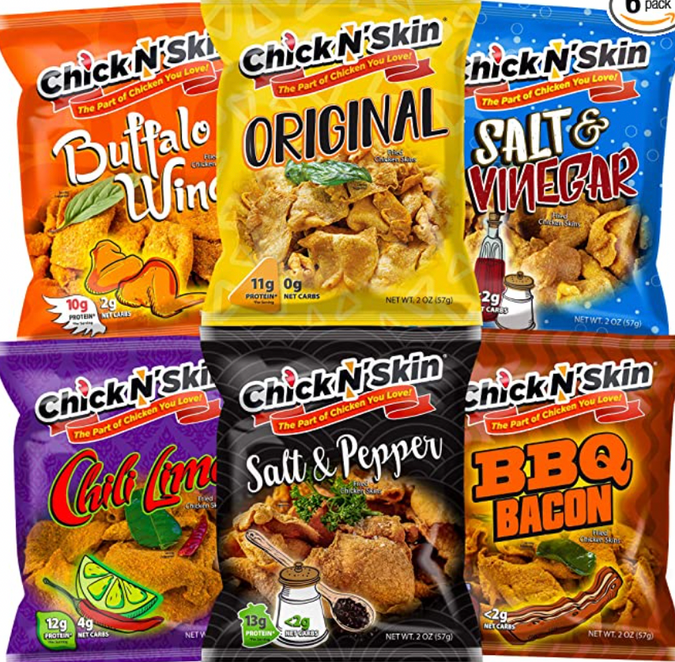 Gribenes, sometimes also known as grieven, were traditionally eaten on toast spread with chicken fat, or shmaltz, or mixed into chopped liver or even matzo balls to add a bit of texture— and of course eaten plain as a little nosh.

Unfortunately, they fell off Jewish deli menus, a victim of the American public’s mid-century obsession with fat and cholesterol.

New York’s 2nd Avenue Deli, one of the last restaurants to find the dish in the 21st century, took them off the menu a few years ago.

According to Ronnie Dragoon, the longtime owner of Ben’s Deli, a kosher chain which has locations in New York and Florida, that’s no surprise.

Even when he first got into the business in 1972, he was sure that gribenes were already a thing of the past, and didn’t even try to put them on the menu. In his first year, he tried and failed to sell another fading Ashkenazi delicacy, p’tcha, a soup of jellied calves feet.

“Over the years, I’ve seen a seismic change in what people enjoy and what they choose,” Dragoon said. “When I first started out, I didn’t sell nearly as much turkey as I sell today,” he said, adding that he sells much more extra lean meat, “even though I think it’s like eating sawdust.” 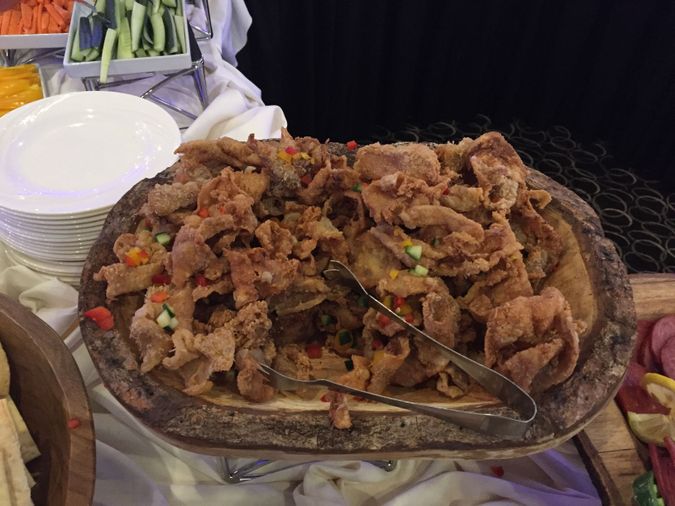 A platter of traditional gribenes

As for gribenes, 50 years on, he’s not sure that many even remember the dish.

“I think if you ask any 20 year-old Jew what gribenes is, they wouldn’t even know,” he said. “I think it’s lost. Just lost.”

While it may have become foriegn to the Jewish palate, that doesn’t mean it’s entirely gone.

They are now seeing a renaissance as, of all things, a diet alternative to potato chips.

Edward Chien, president of one of the first brands to get into the game, Chick N’ Skin, had never heard the name gribenes when he started. 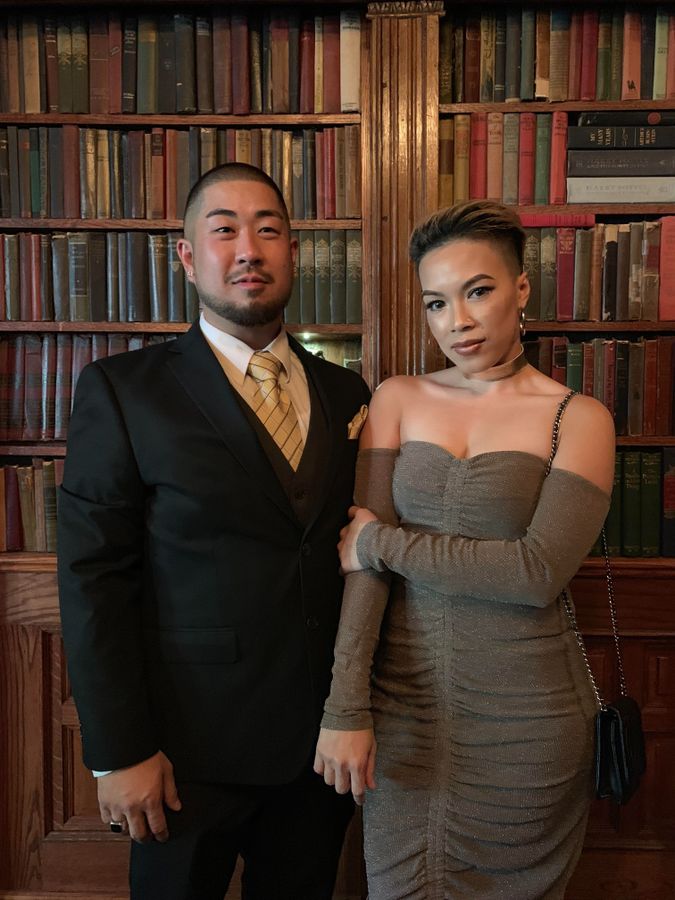 Instead he was first introduced to the idea of fried chicken skins in 2015 by his Thai wife as nang kai thot, a dish popular across Southeast Asia. So popular, in fact, that Asian KFC’s feature it on their menus.

Within two years from that first taste, Chien was selling his own skins at pop-up food fairs around California, and along the way learning about the different cultures and traditions which made similar foods — including gribenes.

“It really took off,” Chien said. “There’s something about chicken skin that touches a lot of cultures.”

He recalled customers coming up to him at the fairs and telling stories about how their grandmothers once made the same thing at Jewish holidays. He heard childhood memories of trying to swipe a few in a busy kitchen.

Chien’s Chick N’ Skins largely follow the same simple recipe as gribenes, though some come in flavors that the early 20th century’s Yiddish-speaking immigrants could never imagine, such as chili lime, Jamaican jerk, buffalo wing, and perhaps most transgressive—cheese. (None of the chicken skins chip brands we found were certified Kosher.)

But one of their biggest selling points is that they fit into the popular ketogenic, or keto, diet. The diet severely limits carbohydrate intake, so that the body enters a metabolic state known as ketosis which speeds fat burning.

Those on the keto diet are encouraged to eat no more than 20-50 grams of net carbs in a day. A two ounce bag of Lays potato chips contains around 30 grams of carbs. The same weight of Chick N’ Skins contains less than two.

Since Chien first started producing in 2017, he’s seen more in sales every year, surpassing $2 million in revenue this year, with over 600,000 bags sold.

That is good news for gribenes lovers, but has created a new problem for Chien. A ton of rendered skins creates over 100 gallons of fat. What, he wonders, can he do with all that shmaltz?