Food influencer Eitan Bernath has millions of followers, is the CEO of his own company and has a new cookbook. Also, he just turned 20.

At just 20 years old, the social media food star is the CEO of his own company, Eitan Productions. Plus, his first cookbook is out this week. Eitan Bernath in his Manhattan test kitchen and apartment, with his culinary producers Rachel Dolfi, left, and Olivia Anderson. (Courtesy)

(New York Jewish Week) — Eitan Bernath props up his iPhone, checks his mic and tries to remember the order of his cookie recipe. He’s about to go live on his Instagram feed, which has more than 650,000 followers. The stage lights are on and it’s show time.

When the New York Jewish Week first featured Bernath as one of its “36 Under 36” honorees in 2018, the then-15-year-old had some 75,000 followers for his cooking videos and recipe blogs. Five years later, his star has risen considerably: Bernath, now has an audience of 7 million across all of his platforms, with over 2 million on TikTok alone. He’s a regular culinary contributor on “The Drew Barrymore Show;” his first cookbook is coming out Tuesday, May 3, and he was recently named to another list of young changemakers: Forbes’ “30 Under 30.”

It’s an incredible rise for the Jewish social media personality who turned 20 last month. Bernath — who was raised in Teaneck, New Jersey — has been obsessed with food since his elementary school days, and he made his first TV appearance on a “Chopped” episode when he was just 12 years old. These days, Bernath is the CEO of his own company, Eitan Productions, and oversees a staff of seven.

“I think what I’m doing right now has always been my goal,” Bernath tells the New York Jewish Week. “Obviously, I didn’t think it would happen this fast and that it would have this level of growth by such a young age, but I wouldn’t say this came out of nowhere.”

Growing up, Bernath attended Yavneh Academy and the Frisch School, the Modern Orthodox high school that includes Jared Kushner among its alumni. Instead of participating in sports teams or after-school clubs, he focused on learning new recipes, writing his food blog and growing his social media following.

“My parents were just as supportive when I was 12 as they are right now,” he says. “I used to tell them, ‘One day, I’m going to be a famous chef and cook in front of millions of people.’ They supported me and they believed in the dream that I believed in. As a kid, that really means a lot to you.”

As he’s explored paths in the food industry, like running a food blog and hosting his own food tutorials on social media platforms, Bernath realized he likes entertaining people as much as he likes cooking. He has a preternatural ability to turn it on for the camera — which is usually an iPhone propped up on a salt cellar and olive oil dispenser. His expressions are exaggerated and inviting, his voice loud and engaging, his movements and words going so fast the viewer almost runs out of breath just watching.

There’s a lot of work that goes into being a social media star and into creating the snappy 10- to 60-second videos that tend to go viral, such as this recipe for samosas or this video making ramen. Helping him bring it all together is a team that includes two culinary producers, a personal assistant, two video editors, a social media manager and a head of operations.

Each week, Bernath releases about two dozen pieces of content across his social media platforms. “I’ve had to build a well-oiled machine — it’s a business,” Bernath says. “The fact that people are able to watch it and not even realize how much work goes into it means we’re doing our job.”

Rachel Dolfi, the team’s executive culinary producer, was Bernath’s first hire in January 2021. “It was a big leap of faith working for someone so young,” she tells the New York Jewish Week. “But he really did everything in his power to make sure I felt comfortable, and understood that this was something extremely important to him, and that he was really building a company that he believed in.”

As someone whose first job is CEO of his own company, Bernath is also something of a trailblazer when it comes to imagining what a Gen-Z run workplace can look like. “It’s one thing to be able to create content and grow an audience; it’s another thing to run a successful company,” he says. “I’m really proud of the company I’ve grown. And I think, honestly, we’re really just getting started.”

Bernath works from home. But not in the way we all have been doing it due to the pandemic, with makeshift couch desks and midday naps. He and his team work from his spacious penthouse in the Gramercy Park neighborhood of Manhattan, which also serves as his test kitchen and the headquarters of Eitan Productions.

“My therapist was like ‘Are you sure this is a good idea?’” he jokes. But, according to him, it works.

Bernath champions mental health awareness, therapy and work-life balance, though it’s unclear how much balance he allows himself, considering he lives in his office and works from his bedroom. “I work basically a 24/7 job,” he says, reflecting on his 16-hour workdays and his inability to leave his apartment without inevitably running into a fan.

“I love it, this is what I signed up for, but it’s very much not for everyone.”

Still, his employees certainly appreciate his grace — it’s almost as if his newness to the position gives him an advantage. “I couldn’t ask for a better boss,” Dolfi says. “I’m not just saying that. Truly, it’s been an experience understanding that my time is also sacred and that he really respects that, and he’ll always ask questions about things he doesn’t know enough about.”

“He is incredibly self-aware and incredibly emotionally intelligent,” said Olivia Anderson, Bernath’s other culinary producer. “As far as workplace dynamics go and being a really good manager, I’ve never had such a healthy relationship with someone. He’ll say little things that I felt like I didn’t learn how to do until I was in my late 20s. Even on hard days, there’s no passive aggression. It’s a very open, supportive work environment.” 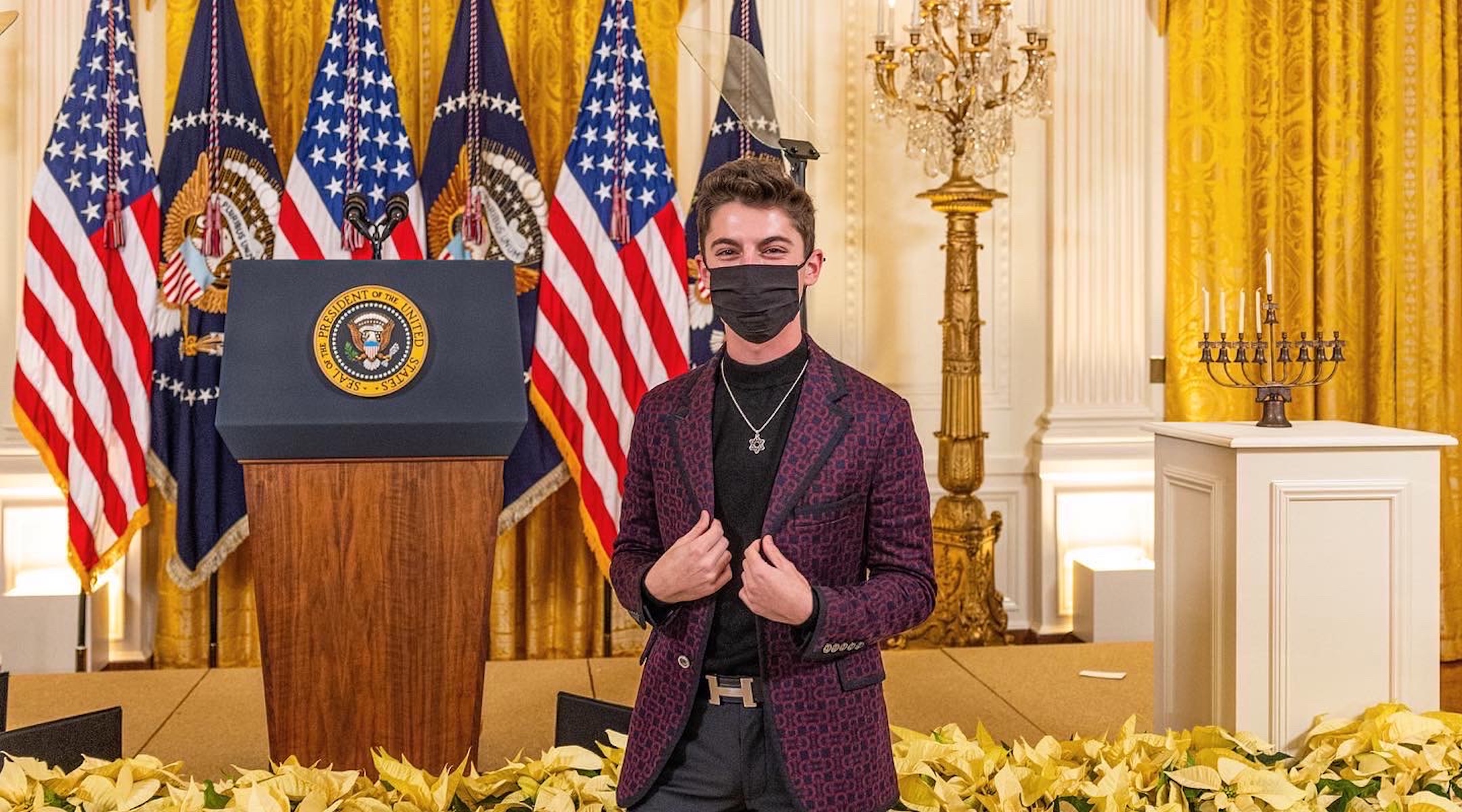 Bernath attended the Hanukkah candelighting ceremony at the White House this past December, and said it was one of his proudest moments as a Jew. (Courtesy)

Bernath is also extremely outward about his Judaism, frequently wearing his Star of David necklace in media appearances, though he didn’t comment on his particular religious observance or Jewish identity.

“I really take being a Jew in the public eye very seriously, it comes with a big sense of responsibility,” he says. “Growing up in Bergen County, most people I knew were Jewish. But I realized that for most of my followers, I might be the only Jewish person they know and interact with.”

“It can be stressful at times,” he adds. “I am very conscious of the fact that I’m representing Jewish people, and that and my actions will reflect how other people perceive all Jewish people.” He says he tries to ensure that his actions always reflect the Jewish values of kindness and tikkun olam, or repairing the world.

Bernath’s pride in his Jewish identity may have reached its zenith this past December, when he was invited to the annual Hanukkah candle-lighting ceremony at the White House. Bernath admitted to crying while listening to the blessings being recited while in the presence of the president and vice president. “Just being able to be loud and proud and Jewish in the White House, celebrating a tradition I’ve grown up with my whole life, filled me with an indescribable sense of pride,” he says.

Bernath’s next venture, his cookbook, may be his most traditional project yet, at least for a celebrity chef. “Eitan Eats the World” is a compendium of 85 “creative, accessible” recipes, including Israeli-Style Sesame Schnitzel with Herby Tomato Cucumber Salad and a Croque Monsieur Tuna Melt.

Despite all the followers and the views and likes, Bernath says there’s nothing like a physical book that he can pick up and turn over in his hands, and slide onto a shelf next to all the books that helped him get here. “I’ve been dreaming of writing a cookbook my whole life,” he says. “Did I think it was going to happen when I was 19? No. But I have a treasure chest of recipes I’ve been saving that were a little too good to share. This is wildly exciting.”

Food influencer Eitan Bernath has millions of followers, is the CEO of his own company and has a new cookbook. Also, he just turned 20.