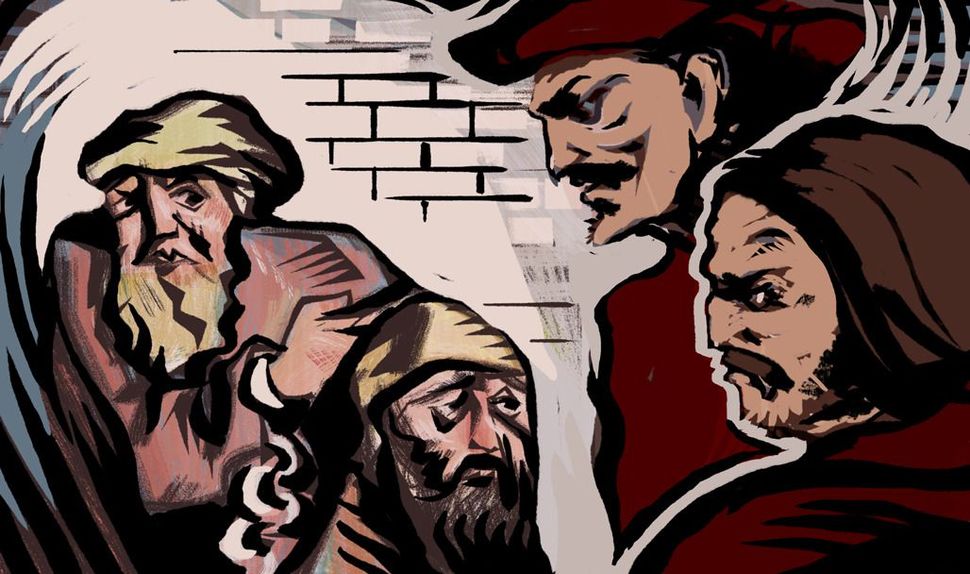 Slawek Nowodworski, the translator/genealogist my son and I hired in August 2016 to take us to Uchanie, insisted that we see the synagogue in Wojslawice first. The cement-colored building with five chimney-like turrets survived the war only because the Germans had used it as a warehouse or stable.

While waiting for the town librarian and synagogue museum curator to unlock the synagogue door, Slawek introduced us to the surprising news about the shtetl whose residents were murdered at the Sobibor extermination camp in 1942. “Wojslawice was a Frankist town,” he said.

The Frankists were Jewish adherents of the apocalyptic Jacob Frank (1726-1791) who preached that the Jews could hasten the coming of the messiah by engaging in sin. To accomplish this goal, Jewish men had to swap wives and commit incest. Dancing around a naked woman, preferably a rebbetzin, as if she were the Torah, was an especially popular rite. Moreover, the Frankists believed that the Talmud, which offered up proof of Jesus’ divinity, taught that Jews need Christian blood. And when the spirit moved him, Frank encouraged conversion to Islam. He himself had embraced Islam, at least temporarily, on one of his trips to Turkey.

How could such goings-on have taken place just down the road from my father’s Kasrilevke? In any case, hadn’t all material references to the two messianic figures of modern times — Shabbetai Zvi in the seventeenth century and Frank in the eighteenth — been consigned to the mists of time?

To this day Wojslawice — a Polish town without a single remaining Jew — is reminded of its Frankist history every day thanks to the four talismanic chapels positioned at four entrance points to the town. Countess Potocka, an enthusiastic Catholic supporter of the Frankist cause, had them erected in 1761 to ward off the alleged curse of Henryk Józefowicz, a Wojslawice rabbi convicted of using a Christian child’s blood to make matzo.

Hardly a year went by in early Renaissance Poland when individual Jews or entire towns weren’t convicted of a blood libel. All of these actions had been initiated by Catholic tribunals set up at regional fairs where Jews paid a municipal tax to sell their wares. In the case of the Józefowicz blood libel, though, the “bilbul,” or blood libel accusation, was instigated by the Frankist Jews against the Wojslawice rabbinate. Even stranger: Frankist and rabbinic Jews both asked the Polish-Catholic authorities to adjudicate the rancor between them.

Various accounts of the Wojslawice blood libel exist. The one I cite comes from the the Wojslawice Yizkor Book, a compendium of histories published — in Yiddish and Hebrew — in Tel Aviv (1970) by former Jewish residents of Wojslawice. The history of the 1760 bilbul was written by a Wojslawicer named Moshe Strassberger.

As the story goes, Wojslawice belonged to the Countess Potocka. The countess got friendly with Jacob Frank’s wife, Chana, and settled Chana and her children on the Potocka manor. To harass and humiliate the anti-Frankists, Chana and her patron demanded two thousand guilders from the Wojslawice Jewish council. If the Frankists did not receive payment, they vowed to betray the Jewish community to the Polish authorities. The Wojslawice Jewish council responded to the Frankist demand with silence.

The Frankists returned fire. They captured a Christian child and told the Jewish council that they would kill him if the community (kahal) didn’t cough up the two thousand guilders. The community refused to negotiate. The Frankists killed the child and planted the corpse in the home of a Wojslawice Jew.

According to the official municipal ruling, a dog rummaging through trash found the body. The corpse was sent to Krasnystaw, the county seat, for examination.

Hebrew University-based historian Pawel Maciejko writes in The Mixed Multitude: Jacob Frank and the Frankist Movement, 1755-1816 about a Vatican manuscript that confirms Jacob Frank’s “direct instigation” in the Wojslawice affair: “A letter of Lippman of Danzig to Rabbi Jacob Emden [a Talmudic scholar and anti-Frankist] recounts that a Jewish woman who belonged to the sect dressed up as the wife of the local rabbi, went to the priests, and informed them that her husband had killed several people.”

The Polish authorities rounded up the usual suspects: The Wojslawice rabbis and shtetl elders. The Jews were separated from each other and thrown into solitary confinement. Only Jesuit priests, eager to convert the Jews to Catholicism, were permitted to visit.

The authorities also attempted to arrest the Jewish rent collector — a figure certainly detested by the masses of Polish peasants and farmers. But he was nowhere to be found.

During the trial, the judge took two Jewish “witnesses” to the purported scene of the crime. The witnesses supported the Frankists’ testimony against the rabbinate.

Without even a cursory show of due diligence, the judge concluded that the Jewish community had hired the rent collector to capture the Christian child; that the rent collector turned the child over to the kahal, which slaughtered him in accordance with Talmudic guidelines, and that the blood, so necessary to Jewish survival, was shared with Jewish communities in Brody, Chelm and other towns. The verdict: Guilty as charged.

According to Strassberger, the convicted Jews were drawn and quartered and their wounds aggravated by an infusion of “burning spirits,” presumably vodka. Their body parts were strung up on poles around the shtetl.

As for the “ringleader” rabbi, the Catholic authorities tied his corpse to a horse’s tail and had him dragged through the streets of Krasnystaw. With this carnival indulgence out of the way, they cut the rabbi into pieces, burnt him down to ash, and shot the ash out of a cannon.

When Rabbi Józefowicz’s real wife protested the trumped up charges against her husband, she was raped by the Frankists. Maciejko writes that a massacre of the Jewish community followed.

The blood libel of Wojslawice was so successful that it was repeated a year later in Zhitomir.

Class warfare: A spur to Frankism?

I cannot think of many more horrible examples of Jewish infighting. But as with every other social and religious brawl, Frankism did not appear out of thin air.

Tensions between the rabbinate and ordinary Jewish folk had simmered for generations. Indeed, one of the earliest stories about Jewish Wojslawice, recorded in Gerush Lite (The Lithuanian Expulsion, 1495-1593), involves one Moshe Ben Chaim. (This part of Wojslawice history comes from Shimon Katz, another contributor to the Wojslawice Yizkor Book.)

Like many Lithuanian Jews, Moshe Ben Chaim and his wife were forced to abandon their shtetl near Vilna and seek asylum with the Polish nobility. For eighteen months husband and wife lived on a manor belonging to Prince Rodinek.

In 1503 Moshe Ben Chaim set out alone and arrived about a year later at Wojslawice. He positioned himself as a bachelor whose parents died after the expulsion. Because he spoke and wrote in several languages, and excelled in financial matters, his name reached the court of Duke Zamojski. Moshe Ben Chaim landed a place on the Zamojski manor as the duke’s financial counselor.

Despite the fact that he was a married man, Moshe Ben Chaim wed the daughter of Rav Shloime Klonimos, Wojslawice’s head rabbi.

Meanwhile, back in Lithuania, business came to a standstill and Prince Alexander asked the Jews to return. The Wojslawice Jews did not need to ask why Moshe Ben Chaim stayed put. Many Jews preferred the protection of their new Polish overlords to the uncertainty of life in Lithuania.

Several years passed. A report was bruited about in Belz (today, a city in Ukraine) that Moshe Ben Chaim had abandoned a pregnant wife in Lithuania.

Rabbinic writings show that Moshe Ben Chaim’s enemies in Wojslawice took an interest in his past. In short order, the matter was taken up by the bes-din (rabbinic court) of Lublin. According to local Polish law, a guilty verdict by the Jewish court could result in the accused’s death and the confiscation of his property. Given the dire consequences, the rabbinate was loathe to render a guilty verdict. It seems too that the princely caste intervened on Moshe Ben Chaim’s behalf — and he was exonerated.

Not exactly end-of-story. The bes-din’s ruling in favor of Moshe Ben Chaim rankled a respected rabbinic scholar named Yankel Pollak, who understood that Moshe Ben Chaim’s abandonment of his first wife rendered her an agunah, a woman chained to her marriage, and hence unable to remarry. “The shame and dishonor of a Jewish daughter reached to the heavens,” he wrote.

The Wojslawice bes-din was unmoved: It upheld Moshe Ben Chaim’s exoneration. The two-timing husband finally agreed to divorce his first wife on the grounds that a Lithuanian prince had “defiled” her and gotten her pregnant. He was permitted to stay in Wojslawice with Rabbi Shloime Klonimos’ daughter.

Class warfare in Wojslawice: Might the “loose” Frankists have been punishing a stern and unyielding rabbinate?

A Frankist echo in a south Jersey shul

One of the congregants in my parents’ Cherry Hill, New Jersey shul is a Wojslawice Jew. After the war he ran a chicken business in Vineland, New Jersey. He is in his nineties now and, sadly, too demented to be interviewed. I spoke briefly with his son one Shabbos after my “roots” trip to Poland.

“My father’s sister, my Aunt Chana, secretly believed in Jesus Christ,” he told me in a half bemused whisper.

Which just goes to show that my father knew what he was talking about when he called the Wojslawice Jews meshamudim. A significant minority, anyway, were meshumodim — and not merely apostates but, as Maciejko puts it, descendants of the mixed multitude (erev rav), or “foreign rabble,” that accompanied the Israelites out Egypt. The rabbinate insisted that an erev rav “gene”, hostile to rabbinic stricture, would always live inside the hearts and minds of some Wojslawice Jews.

The Frankists, on the other hand, accused the rabbinate of being the erev rav.

The rivalry between the Frankists and the rabbis resulted in a standoff that no Wojslawice Jew could ever hope to win.

Grateful acknowledgement to the Grodzka Gate Center’s Emil Majuk for telling me about the Wojslawice Yizkor Book.

Barbara Finkelstein is writing a book about mental illness and housing in the Bronx.