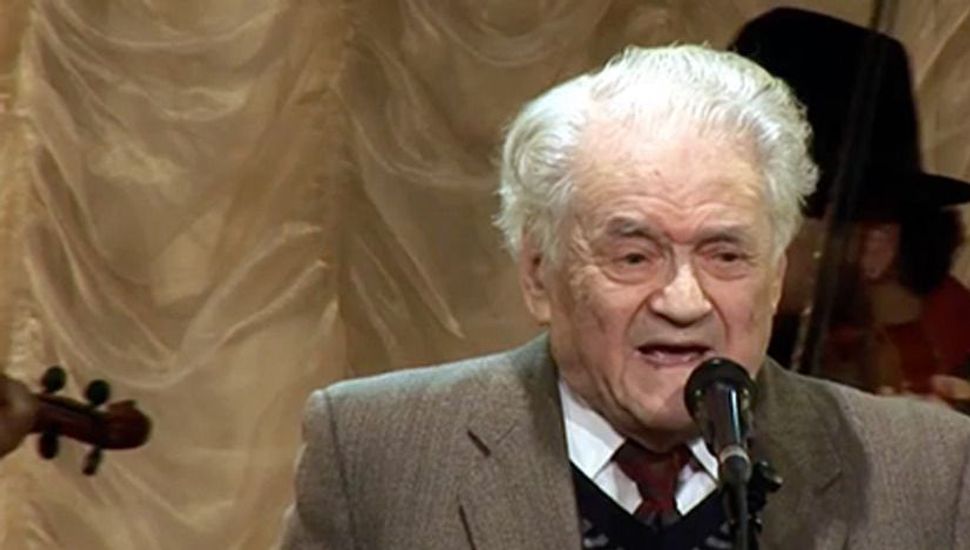 The legendary Yiddish folksinger, folklorist and teacher, Arkady Gendler, died at the venerable age of 95 at his home in the Ukrainian city of Zaporozhe on May 22nd.

Gendler, a constant ebullient presence at klezmer music festivals around the world, played an important role in the modern evolution of the genre. In 2001, he recorded his first musical album in Berkeley, California, entitled, “My Town, Soroca,” which included a previously unknown song by Itzik Manger. Later, he produced several more albums with original and little-known Yiddish songs. The “Center of Jewish Education in the Ukraine” recommends Gendler’s teaching materials for students of Yiddish in the Ukrainian and Russian public schools. But Gendler was much better known in the Jewish klezmer scene as a folk musician and music scholar.

To get a taste of Gendler’s charismatic performances, watch him sing “Freyen Zikh Iz Gut” (Rejoicing is Good), composed by fellow-countryman Zelig Barditshiver:

Gendler helped organize the “Klezfest” festivals in Russia, which began in 1997, with the name “Klezcamp” – named after the annual weeklong klezmer convention in upstate New York. Alexander Frenkel, director of the St. Petersburg Jewish Community Center, said that when Gendler was first invited to participate in klezmer events, they had assumed that he would be an average performer, unlike the hugely popular Yiddish folksinger Nechama Lifshitz. The organizers quickly realized, however, that the previously unknown, unassuming man was a uniquely encyclopedic treasure trove of Yiddish music.

Gendler was born in the Bessarabian city of Soroca. Bessarabia, now Moldova, was one of the regions in the Soviet Union where Yiddish was a widespread, living language during the entire Soviet era. Today, Soroca is a neighborhood in Kishenev, the capital city of Moldova.

During the Holocaust, Gendler served in the Soviet army; when he returned from the front, he found out that nearly his entire family had been massacred. After the war, he worked as a chemical engineer. In 1992, already a retiree, Gendler began teaching Yiddish to the students of the “ORT Aleph” school in Zaporozhe.

In the 2000s, Gendler traveled from the Ukraine to St. Petersburg for a concert. Frenkel asked him then if he had ever heard Aaron Lebedeff’s song, “Petrograd”, the only Yiddish song about St. Petersburg ever written (the city was called Petrograd from 1914 until 1924). Although the long-forgotten song was composed and performed in New York in 1927, Gendler, who lived in the Soviet Union, immediately replied: “We used to sing that song in the 1930s.”

Two hours later, he recalled almost all the lyrics, and ad-libbed those he had forgotten. It remains a mystery how a Soviet Jew knew a little-known American song performed on Broadway when he himself was only a young child at the time.

Frenkel recalled that in 2012, already a 90-year-old man, Gendler returned once more to St. Petersburg to perform, accompanied by a nurse. The organizers were hesistant to let him onstage in his condition, but during the concert, Gendler miraculously transformed himself into an energetic musician.

Motl Gordon, a young Yiddishist from St. Petersburg, recalls that Gendler was a rare breed: the enthusiastic educator. When he taught his classes in Zaporozhe, he came up with a special system of teaching gymnastic terminology in Yiddish through rhyme to transform even gym time into a fun language lesson. His Yiddish was quite good and very literary. Sometimes, his own Bessarabian dialect snuck into his “standard Yiddish”, causing him to pronounce “tateh-mameh” [parents] as “toteh-momeh”, but that only added an authentic flavor to the lesson.

In contrast to other Yiddish singers of the older generation like Lifshitz, Gendler got along well with young people and even small children. With his sharp memory and a lively nature, he constantly built bridges between older native Yiddish speakers and young Yiddish enthusiasts.

Thirteen years ago, together with the young Yiddish poet Yisroel Nekrasov, I published the first issue of the literary magazine, “Der Nayer Fraynd,” [A New Friend] which included an interview with Gendler. The teacher and singer related then that his school in Zaporozhe was the only national educational establishment in the entire Former Soviet Union region where children officially studied Yiddish. In response to a question regarding the future of Yiddish language and culture in Ukraine, Gendler replied : “We need to work, work, and work” in order to cultivate new generations of Yiddish speakers. “My life goal is now the revival of Yiddish culture and above all – the Yiddish language.”

According to Ukrainian law, Yiddish is on the list of the country’s official minority languages. Unfortunately, its future in the Ukraine is precarious. Though parents can organize government-funded Yiddish classes if they wish to do so, there are barely any Yiddish teachers left there. The local “ORT Aleph” school’s website states that they still teach Yiddish, but Gendler admitted that they stopped the classes years ago due to his declining health.

Zaporozhe had a thriving Jewish community before World War II. Among its more well-known Jewish natives were the classical Hebrew poet, Shaul Tchernichovsky, and the first Ukrainian-Soviet Olympic champion: Yakiv Punkin. But almost all its Jews were decimated in the Holocaust. Today it’s a blighted city of machinery, construction and chemical industry and very few Jews remain – all the more remarkable that Gendler was able to carry out his campaign of Yiddish activism and commitment to Yiddish folk music there till the last days of his life.