Gella Fishman Made Sure That Yiddish Wasn’t Shoved Aside 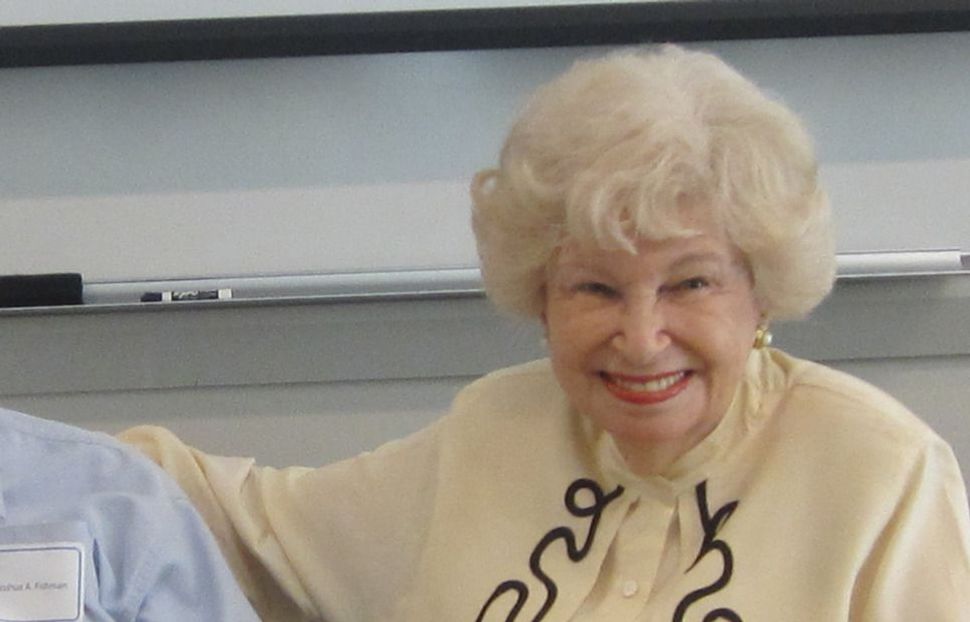 Image by Courtesy of The Sociology of Language and Religion

About two years ago Gella Fishman, the Yiddish teacher and archivist who passed away last month, called me one evening and asked indignantly: “How could it be that YIVO is now sending all its letters out without a single word in Yiddish?”

Although I had been receiving the same emails and regular mailings she did, I admit that I hadn’t noticed they were no longer bilingual. Since its founding in 1925, YIVO, the venerable research institute of Eastern European Jewish studies, had for at least half a century held its lectures and published its articles in the Yiddish language, until about 20 years ago, when the majority of researchers, administrators and donors no longer spoke it. Its mailings however, had, at least for a time, continued to be printed in both languages.

I tried to reassure Gella, saying that it surely wasn’t due to an ideological shift, but that there probably was no longer anyone on staff who could draft or type up a letter in Yiddish.

“So, let them find someone who can,” she replied. “If it’s too much to translate the entire text, they should, at the very least, add a paragraph in Yiddish.”

I pointed out to her that the lectures promoted in the letters were in English anyway. “Most YIVO lecturers today don’t know Yiddish well enough to give their talk in the language, and even those that do, speak in English since that draws a larger crowd.”

“I know,” Gella persisted. “But we’re not talking about just any organization. This is YIVO, Max Weinreich’s institute. Even if the lectures are given in English, the letters should continue to be bilingual in order to send a message that the Yiddish language has remained an integral part of YIVO’s identity.”

This was a point we could both agree on and I encouraged Gella to email YIVO about her concerns. Whether she ever actually wrote and sent the letter I’ll never know, but her words still resonate with me because deep down I know that she was right. Symbolism means a lot.

Gella has always been the model of a true Yiddishist although she herself refused to be labeled as such. Whenever she met people who knew the language, even if not fluently, she would address them in Yiddish. When speaking before a mixed crowd (people who understood and people who didn’t) she would make sure to reserve at least part of her talk in mame-loshn.

In 2015, for example, I commemorated my mother’s first yortsayt with a venerable Jewish tradition: inviting friends and family to my home and presenting a short Torah lecture. Since most of my guests didn’t know Yiddish, I gave the talk in English. After I finished and enjoined my guests to partake of some refreshments, Gella pulled me aside. Implicitly referring to my father, Yiddish professor and Yiddishist Dr. Mordkhe Schaechter, she asked if she could say a couple of words to the guests in Yiddish because “it just doesn’t feel right NOT to greet the audience in Yiddish when commemorating a member of the Schaechter family.”

What could I say to that? I called my guests back to their seats and Gella made her remarks in mame-loshn.

Gella’s campaign to ensure that Yiddish institutions and speakers continue to use Yiddish in public forums recalls the bold Yiddishist intellectuals of pre-war Vilna, the city where YIVO was originally founded before the Holocaust forced its founders to relocate it to New York City.

These respected figures stubbornly defied the tendency towards Jewish linguistic assimilation. The erudite lexographer and YIVO co-founder, Zalman Reisen, gave all his lectures in Yiddish, even though the intellectuals who attended his talks spoke Russian or Polish to each other. The respected defense lawyer Yosef Chernikhov insisted on addressing even strangers in Yiddish in public places, especially if he knew that most of the people present were Jewish, whether this was in the courtroom, in municipal offices or in a bank. At a time when educated Jews were eager to shed their ethnic connections, Reisen and Chernikhov wanted to prove that a minority language like Yiddish was just as legitimate as the official language of the land.

Like them, Gella was a maximalist when it came to Yiddish. The term maximalism is used in many contexts: there’s an artistic maximilism, a Marxist one, a theological-archaeological one and a political one. In Yiddishist circles, says Yiddish linguist David Braun, maximalism refers to the usage of Yiddish in all possible contexts of Jewish life, and in cultivating the language to meet the needs of these contexts.

In other words: not just praising Yiddish for its rich East European history; not just singing Yiddish songs, but actually speaking it as much as possible, in order to enable its use among future generations.

Maximalism demands that we speak and write in Yiddish even when it isn’t always easy or convenient to do so.

Gella knew that by criticizing a Yiddish institution like YIVO for “abandoning” Yiddish as a spoken or written language, she was risking antagonizing its leadership and administration, and probably wouldn’t convince them anyway. But that doesn’t mean it wasn’t worth trying anyway. Today every political movement and ideology has people lobbying for them. Why shouldn’t we advocate more for Yiddish?

For those of us who know and cherish the language, here are some things we could do to raise more “Yiddish awareness”:

Gella Fishman Made Sure That Yiddish Wasn’t Shoved Aside