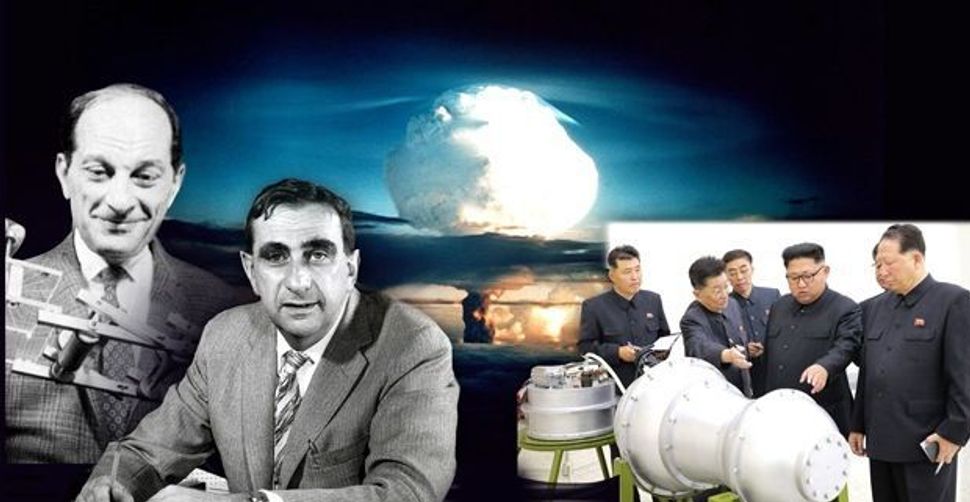 The whole world was recently unnerved to learn that North Korea successfully tested a hydrogen bomb on September 3rd, 2017.

According to an analysis of the seismic activity measured from the blast, North Korea’s nuclear scientists seem to be familiar with the Teller-Ulam design for thermonuclear weapons. While famous in scientific circles, many are unaware that the classic hydrogen bomb design is actually named after two Jewish physicists, Edward Teller and Stanislaw Ulam.

Soon after the infamous bombings of Hiroshima and Nagasaki in 1945, American scientists started working on a second-generation super weapon. On November 1, 1952, the first full-scale test of Teller-Ulam’s bomb design was conducted on the Pacific island of Elugelab in the Enewetak Atoll. The blast, over 450 times more powerful than the bomb dropped on Nagasaki, pulverized the entire island, sending its remaining ashes about 27 miles into the sky. The Soviet Union almost immediately followed suit and built its own variety of the Teller-Ulam bomb, successfully testing it in 1953. Although the USSR had already developed a novel thermonuclear weapon in 1949, the American design was chosen for its efficiency. Klaus Fuchs, a German physicist who performed some calculation work for Edward Teller, supplied the design to the Soviet government and was subsequently convicted by British authorities for spying.

The nuclear arms race culminated in 1961, when the Soviet Union demonstrated its Tsar Bomba capable of evaporating an entire country. Reverberations from the blast shattered windows in parts of Norway and Finland, almost a thousand miles away from the Arctic test site.

The building of basic nuclear weapons requires highly complicated industrial processing of uranium enrichment and advanced research facilities. After the preliminary 1952 experiment, the American scientists developed an ingenious design, which radically reduced the size and cost of thermonuclear bombs. Although tritium, the ultra heavy isotope of hydrogen, is commonly used in small amounts for medical research, emergency exit signs and glowing key chains, it is a highly expensive and tightly controlled radioactive gas produced by nuclear reactors. In the Teller-Ulam design, the bomb itself generates its own tritium during the explosion from lithium deuteride, a relatively cheap and easy to obtain material.

All hydrogen weapons contain small uranium or plutonium-based nuclear bombs, which serve as detonators. During the first stage of the explosion, the uranium atoms rapidly decay, producing an enormous amount of energy and turning lithium into tritium. During the second stage, the initial nuclear blast causes deuterium and tritium atoms to collide, thereby beginning the explosive chain reaction of the two hydrogen isotopes. Fortunately, lithium deuteride is usually a harmless salt-like chemical. Nevertheless, once a country obtains basic atomic reactors and weaponry, it may be able to use it to dramatically enhance the power of its weapons thanks to the brilliant invention of two American physicists.

Edward Teller (1908-2003) was born in Budapest. Albeit secular, his parents, Ilona and Max, always fasted on Yom Kippur. The scion of a wealthy Hungarian-Jewish family, his father worked as an attorney and his mother was a pianist.

After immigrating to America in 1935, the young scientist whose doctoral studies focused on hydrogen atoms soon joined in the nuclear weapon’s research lead by Robert Oppenheimer, a Jewish scientist from New York. As a staunch supporter of nuclear and thermonuclear weapons, Teller reported Oppenheimer as a “security risk” for the latter’s vocal concerns over the efficacy of the bomb. As a result, Oppenheimer’s security clearance was revoked, allowing Teller to further advance his hawkish agenda.

Stanislaw Ulam (1909-1984) was born in Lemberg (today, Lviv) into a wealthy Jewish family of bankers and businessmen. A mathematician, he was hired by John (Yonah) von Neumann, a Hungarian Jew and one of the founding fathers of computer science who made important contributions to the development of the hydrogen bomb.

The head designer of the Tsar Bomba, Yuli Khariton, was Jewish as well. Born in St. Petersburg to an actress and a prominent Communist journalist, he became the chief designer of Stalin’s nuclear project, which was initiated in 1943.

While undoubtedly brilliant, some of these groundbreaking scientific discoveries may raise eyebrows today and make us wonder whether these secrets of the universe were worth discovering at all. After all when exploded, thermonuclear weapons literally “break the ground” in the most devastating way ever invented by man.

Nevertheless, it’s still remarkable to learn how much, throughout history, the tiny Jewish population has contributed to these most significant scientific advances of mankind.