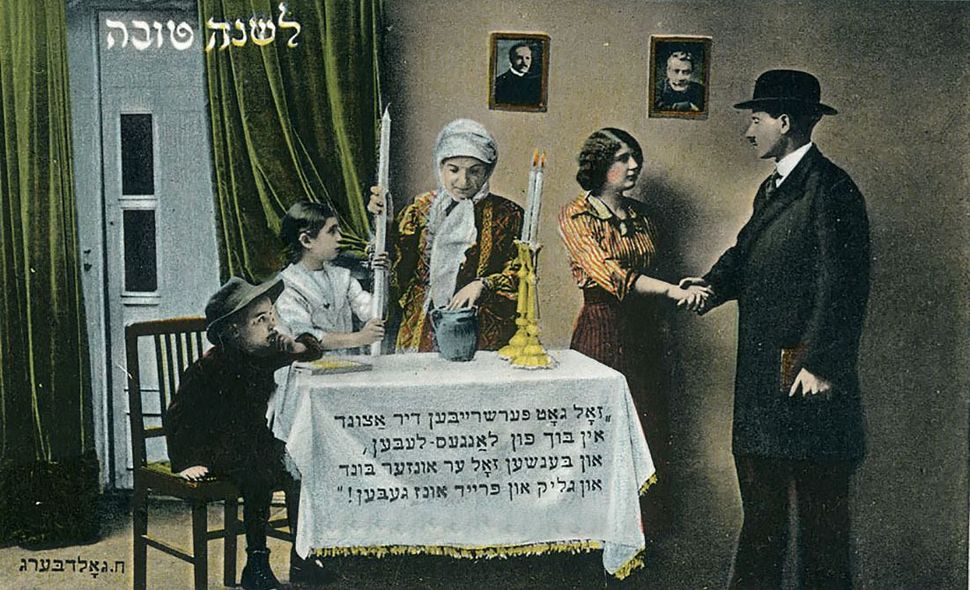 As the Jewish High Holidays approach, many of us are sending our new years’ greetings via electronic means, whether email, text messages, Facebook, WhatsApp, Snapchat or, of course, Twitter, which seems to me ideally suited for this. As for those unfortunates who do not know how to tweet yet, may you all learn how to tweet in the coming year…

But way before the electronic medium took over our lives, roughly between 1880 and 1980, almost all Jews in Europe, America and Palestine (later – Israel) sent their relatives and friends “shone-toyves”, or new year’s cards. Shone toyve actually means “a good year”.

In fact, this tradition actually began even earlier, probably in the 14th century, in the German Jewish communities, but those were individually written on expensive and fine stationery. Only after the invention of the postcard in the 1860’s did the mass writing of shone toyves take off.

In 1869, at the suggestion of the Austrian economics professor Emmanuel Herman, the Austro-Hungarian Post introduced the first postcard, called “Korrespondenzkarte”, as a cheap means to send short letters.

The new invention spread rapidly. Three million cards were sold in the first 3 months. Shortly afterwards it was introduced in Prussia and soon it reached the rest of Europe and the United States. In the 1890’s, these postcards began featuring pictures on one side. That was the beginning of the postcard craze. At its peak in 1913, almost a billion cards were sent in the US alone.

Because of the enormous popularity of postcards, people began sending greetings cards for Christmas and for the Christian new year. Soon Jews were re-inventing this new tradition for Rosh Hashanah.

Many of the the Yiddish new year’s cards were designed by Haim Goldberg – the most important and prolific designer of Rosh Hashanah cards. Haim Yisroel Goldberg was born in 1888 in the Polish town Łof Luków (Likve in Yiddish tradition) to a Hasidic family, the son of Feige and Zalman Goldberg. He received a traditional Jewish education, but when he realized that he had artistic talent, he traveled to Germany to study art.

In 1912 Goldberg returned to Warsaw and opened a photo studio. Before long he was hired by the publishing house “Yehudia”, owned by the famous Yiddish daily newspaper, “Haynt” [Today], as a graphic designer of greeting cards and postcards.

Goldberg created colorized postcards, many of them Jewish new year’s cards utilizing a unique method. First he photographed staged scenes in the studio, portrayed by amateur actors wearing appropriate costume, and then he used (sometimes primitive) painting and graphics techniques to make them look like paintings. Finally, he added short Yiddish greetings in rhyme which he himself composed.

After the breakout of the second world war in September 1939, Goldberg managed to escape to the city of Białlystok, which was then occupied by the Soviet Union. After the Germans occupied it in June 1941 he was interned in the Białlystok Ghetto. There he was put in charge of illustrating official posters for the Judenrat. In 1943 he was murdered by the Nazis.

Here is a new year’s card designed by Goldberg: 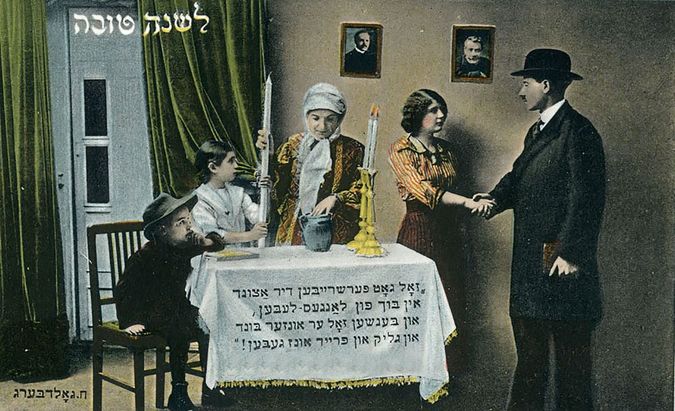 The rhymed Yiddish text says: “May God write your name now in the book of long life, and may he bless our union and give us success and peace.”

At first glance the card seems to be portraying a traditional holiday scene, candles in polished candlesticks flickering over a gold-fringed white tablecloth, but upon looking closely you notice that only the grandmother is traditionally attired, while the father, mother and children are dressed in a more modern style. On the wall are portraits of two cultural leaders of the Jewish Enlightenment. Do you know who they are? (Answer: the Yiddish writer, I. L. Peretz, is on the right; the Hebrew writer, H. N. Bialik, is on the left)

Many of the _shone toyve_s hint at the fascination that Jews had with the explosion of modern technology of that era: Automobiles, the telegraph, the telephone, the radio and the airplane. People believed that science and technology could lead to global peace and prosperity for all. The outbreak of WW1 a few years later proved that science could also bring countless deaths, endless destruction and a catastrophe for the Jews of Eastern Europe.

Here is a curious example of that previous optimism, some might say – naïveté – praising the radio: 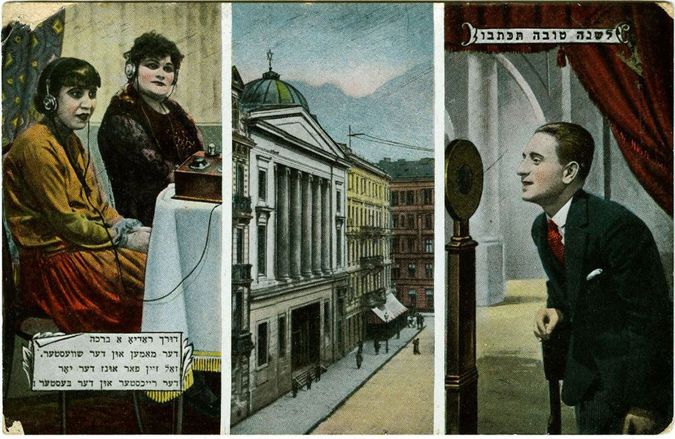 On the right we see a young man standing before a microphone, transmitting a blessing to his mother and sister:

“Sending blessings to Mother and Sister through radio / May the year for us all be the richest and the best.”

The well-dressed young man has apparently immigrated to America and done well for himself. On the left, his mother and sister are listening to his message using headphones. The women are more conservatively dressed, probably still living in Poland. In the center we see a scene in a well-known spot in Warsaw: Koszykowa Street, although Goldberg added three fictional elements to the scene: a dome on one of the buildings, with a star of David and a radio antenna.

The years between 1880 and 1924 saw the peak of immigration to America. The rise of steamships made it more economical and affordable, and the policies of the US government still encouraged immigration, especially from Europe (immigrants from China, on the other hand, was excluded by a series of acts of Congress).

Nearly 25 million Europeans made the long trip in this period. Italians, Greeks, Hungarians, Poles, and others speaking Slavic languages made up the bulk of this migration. Among them were between 2.5 to 4 million Jews, mainly fleeing pogroms, discrimination and economic hardship that were their lot in the pale of settlement in the Russian Empire.

The following New Year’s card was probably made in Germany in the early 20th century, commissioned by the famous New York-based Hebrew Publishing company. 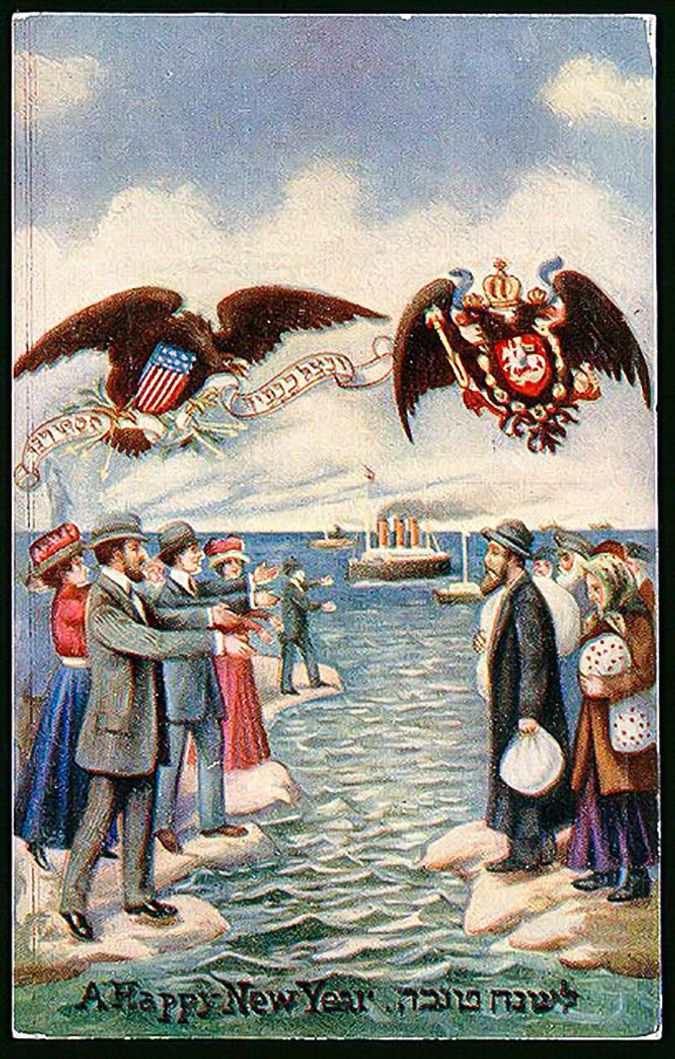 The card depicts two eagles in the sky: Under the Imperial Eagle of the Russian coat of arms, a group of impoverished, traditionally dressed Russian Jews, carrying their meager belongings, line Europe’s shore, gazing with hope across the ocean.

Waiting for them are their Americanized relatives, whose outstretched arms simultaneously beckon and welcome them to their new home. Above them, an American eagle clutches a banner with a line from Psalms: “Shelter us in the shadow of Your wings”.

Massive Jewish immigration to the United States diminished sharply with the Immigration Act of 1924, which aimed to further restrict immigrants from southern Europe and Russians who had begun to enter the country in large numbers beginning in the 1890s. Racism and blatant anti-Semitism certainly played a role in this legislation.

Some of the shoneh toyves contained humorous elements. Here you see, for example, a “leshone toyve ship ticket” from about 1910 – 1920.

Designed to look like the ship tickets immigrants needed to get to the New World, this “ticket” also includes an illustration of the Statue of Liberty, a locomotive (like the ones used throughout Europe) and an industrial plant in the “Goldene Medine”. Instead of a voyage to America, though, the card promises the recipient “120 round trips through the storm of life.” 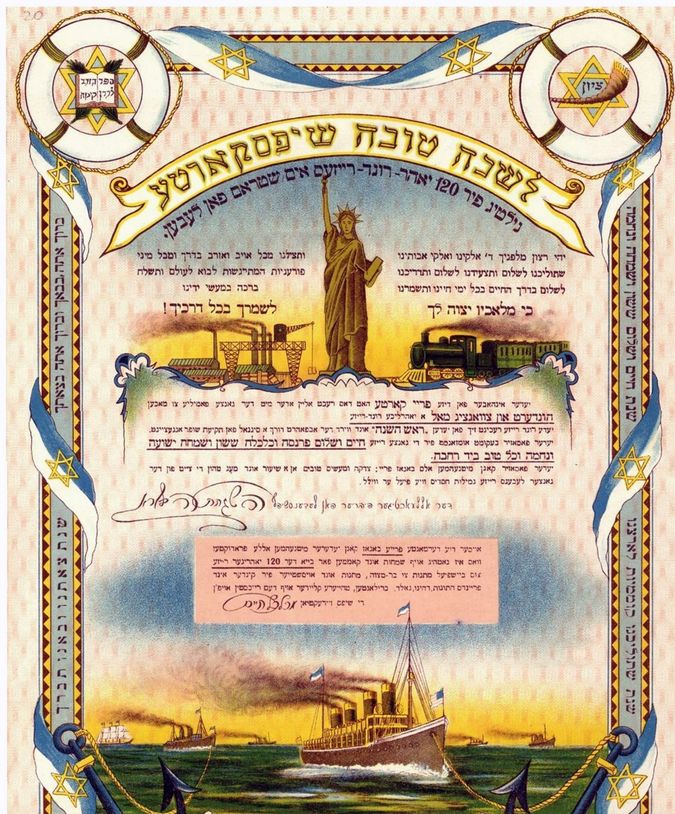