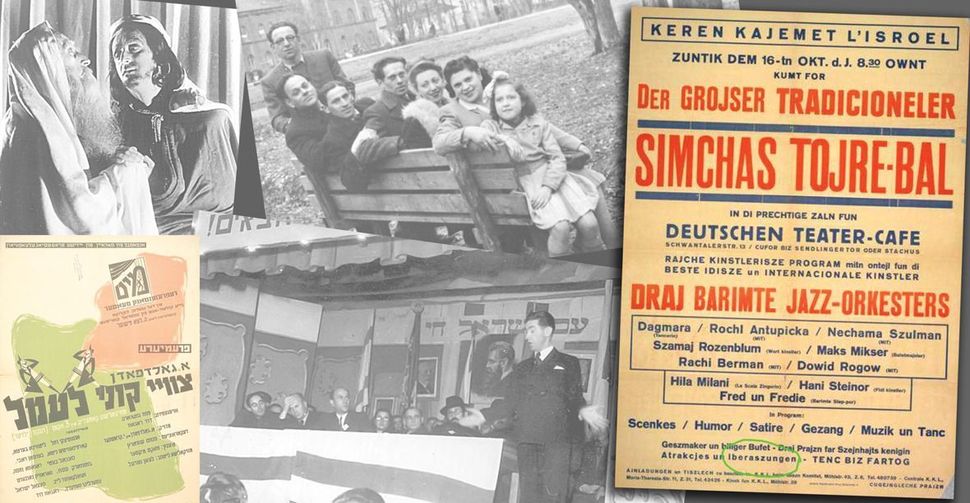 In today’s trip to the past, we examine an invitation to a party – a Jewish Holiday Party.

I found this fascinating poster in the YIVO digital collection of POSTERS FROM DISPLACED PERSONS CAMPS, which are on display at the website of the American Center of Jewish History.

As you can clearly see this poster is written in Yiddish, albeit in the Latin alphabet. The date is Sunday, October the 16th, 1949, the 23rd of Tishrei 5710, on the holiday of Simkhes Toyre. Let’s examine this poster: 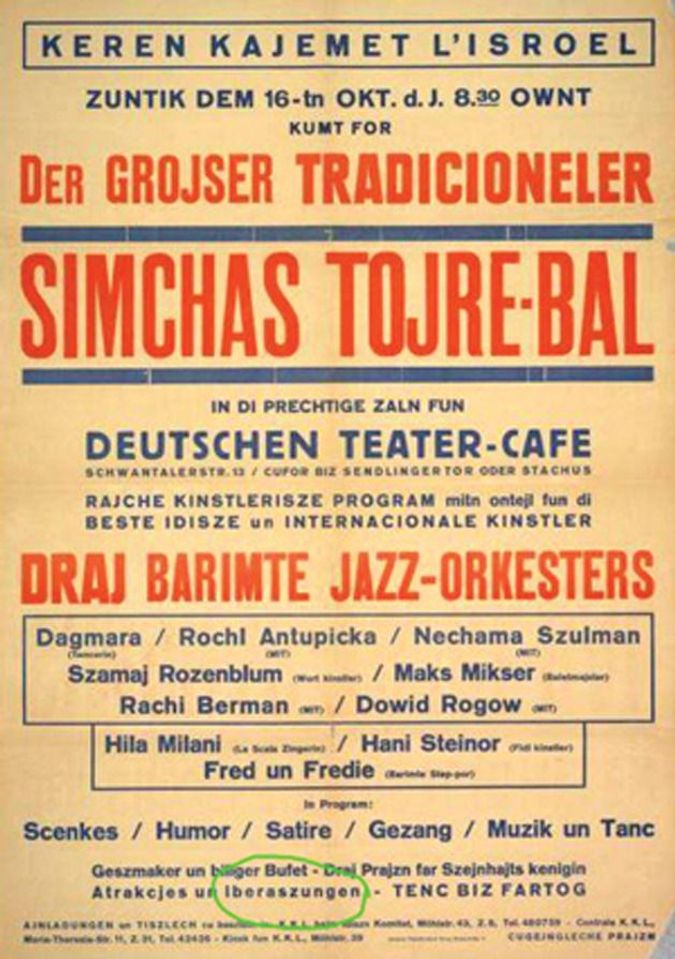 On Sunday, the 16th of October starting at 8:30 PM , the big traditional Simkhes Toyre Ball will take place in the splendid halls of the German theater Café on 13 Schwantaler Strasse. The access is via Sendlinger Tor or Stachus. (Clearly, this is Munich, Germany).

The ad promises a rich artistic program with the best Yiddish and international artists. 3 Famous Jazz orchestras performed. The program also included: theater scenes, humor, satire, songs music and dancing. An inexpensive (but tasty!) buffet was offered. Three prizes were offered to the winner of the beauty queen concert.

There were also attractions and surprises and “Dancing until Dawn!!”

While almost 6 million Jews were murdered during the Holocaust by the Nazis and their allies, hundreds of thousands of Jews survived. Almost a million persons from many nationalities were declared as displaced persons who were put in camps in Germany, Austria and Italy. Among them there were about 250,000 Jews who called themselves the Shayres Haplite, literally, the remaining remnant.

One of the major bodies who acted in the DP Camps was the Jewish National Fund. The iconic symbol of the JNF was the “Blue Box” – a small white blue collection box where people collected small amounts of money for the cause. After WW2 it also took upon itself to help the Zionist educational efforts in the DP camps. It did so via lectures, propaganda and cultural events. The headquarters of the JNF in Germany were located in Munich, in close proximity to a large number of DP Camps.

Think of it – very close to the beer hall where Hitler started his infamous Putsch, a central location of Nazi Martyr worship – Jews celebrate their Torah and the new Jewish state. While Jews are free – Germans are under military occupation.

What do we know about the Deutsches theater?

The German Theater in Munich in Schwanthalerstrasse 13 was opened on September 26, 1896. The program included musicals , dance, shows, operettas and with concerts by international companies and artists. The Deutsches Theater is today the largest theater in Munich after the opera, and the largest and most famous stage theater in Germany.

But did it exist in 1949? On March 9, 1943, the theater was destroyed by American bombs. Only the neo-baroque silver room was spared and has remained to this day the only room of the original building. So the ball was held in this famous location, probably at that “silver room”

Although most of the displaced persons were, or rather became Zionists, their Lingua-Franca was Yiddish. Almost all of the DP publications were in Yiddish, their schools had mostly Yiddish curricula, and theater productions were held in Yiddish.

A lack of Yiddish printing presses in Germany meant, however, that many of the posters and newspapers published in DP camps were printed in transliteration. Some Jews who did not know Yiddish before the war and learned it in the DP camps also could not read the Hebrew alphabet so these posters were more universally understood.

The program promised “the best Yiddish and international artists”. Were they? 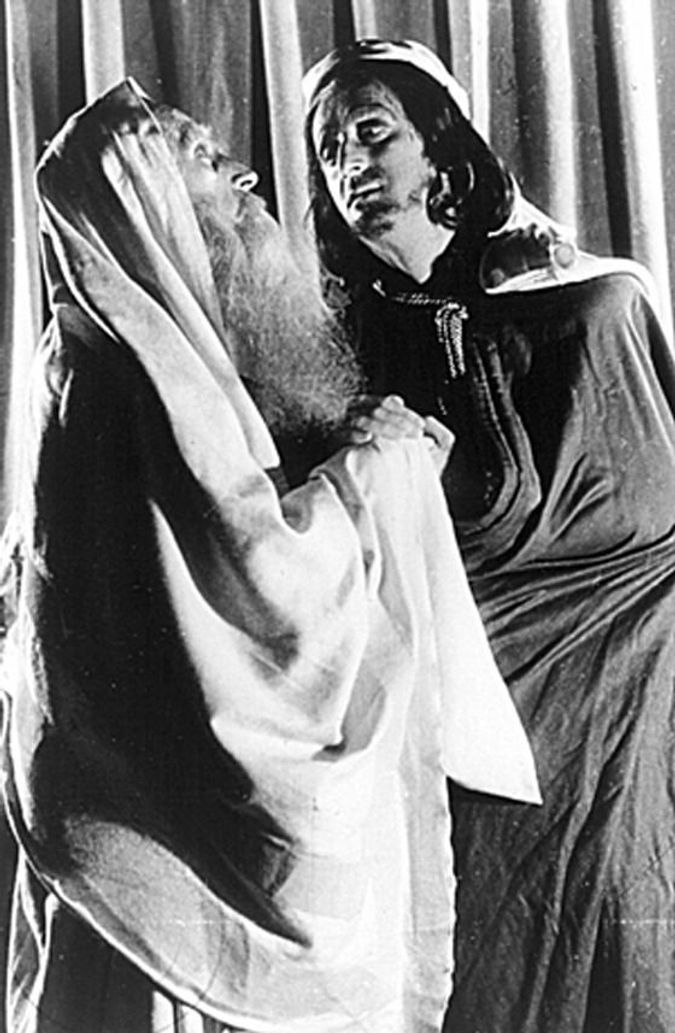 Rachi Berman and Severin Szerling from the MIT performing in “Shlomo Molcho” in the Munich DP camp.

Go and have another look at the poster. Notice that under each artist’s name, in small letters, you see his artistic “affiliation”. Some actors belong to “MIT.”

What was MIT? This was the most important theater group in that part of the American Zone. It’s name was Münchner Jüdisches Theater. This theater group existed between 1946 and 1949, when most of its members emigrated to newly-proclaimed young Israel. 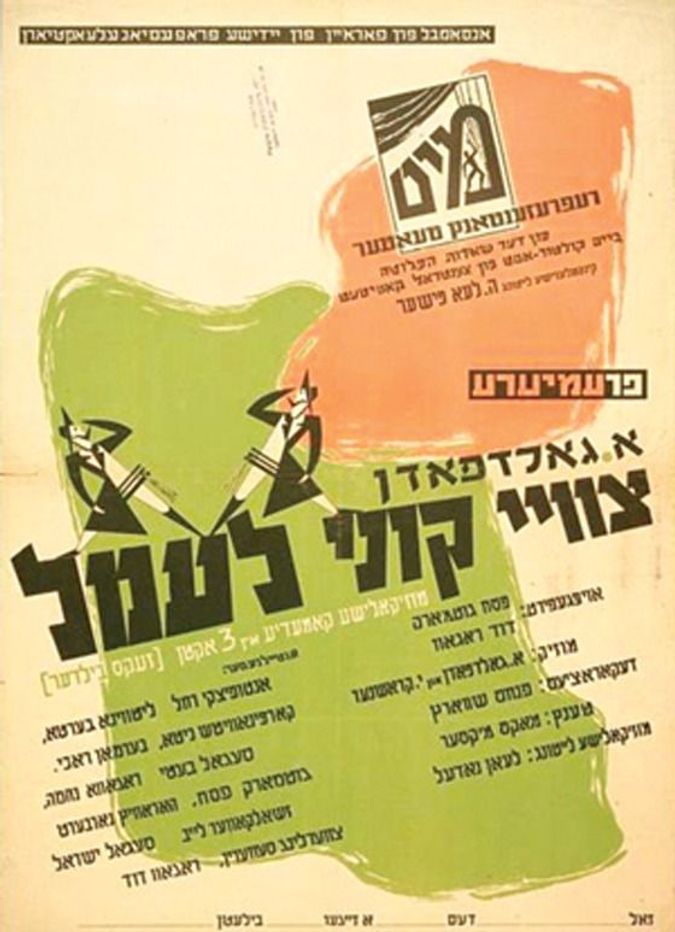 In this poster, prepared for the premiere performance of Goldfaden’s famous “Tsvey Kuni Leml” we meet five of our ball’s participants: David Rogow, Rachi Berman, Rochl Antupicki, and the dancer Max Mixer.

Two of the Simkhes Toyre ball participants deserve our attention, since their stories symbolize the fate of Jews during the Holocaust. 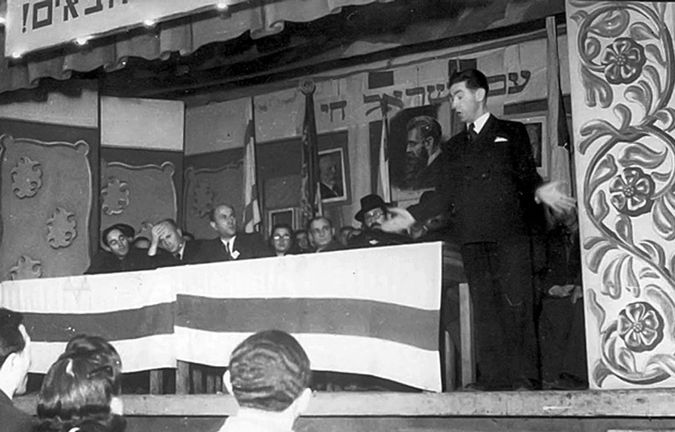 Pocking, Germany, The actor Shamai Rosenblum performing on the occasion of the opening of the Jewish National Fund bazaar, December 1947. Image by USHMM

Shammai was a young Hasidic youth at the Sochachev yeshiva in Lodz known as the “House of Abraham.” Later Shammai became a Zionist and a young theater actor. He played in the Lodz Ghetto and in the death camps after the liquidation of the ghetto, where he was saved from death by the notorious Nazi war criminal Dr. Mengele, who loved the anti-Nazi play he dared to perform in the camp. Rosenblum performed in the DP camps and later immigrated to Israel, where he dedicated his career to the commemoration of the Shoah, and especially the Ghetto and Camp songs.

Here you can listen to a very rare recording (in Yiddish) of a radio drama featuring Shammai Rosenbaum. 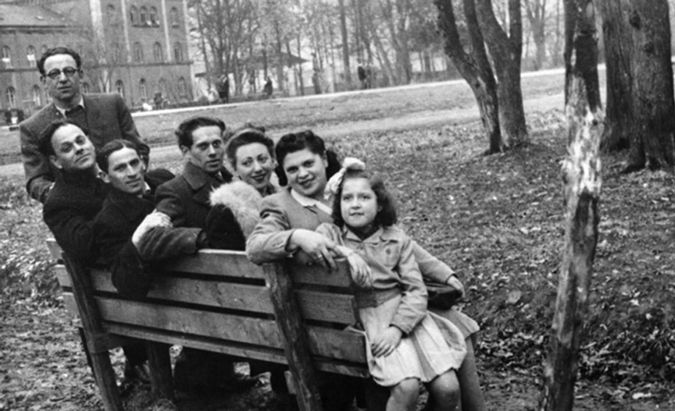 A group of Jewish Actors from displaced persons Camps sits on a park bench in Munich. Rogow is third from the left. Image by USHMM

Born in Vilna in 1915, David Rogow attended the drama school in that city and began his theater career in “Maydim,” Vilna’s puppet theater, and the “Oavke” variety theater. In the early 1940s he was a member of the Yiddish State Theater in Minsk. From 1946 to 1950 he was part of MIT, which performed in D.P. camps. His best known role during that period was as “Dovid Reuveyni” in A. Glants Leyeles’ “Shlomo Molcho.”

He arrived in New York in 1950 and joined the Hebrew Actors’ Union while still appearing in Europe as well. Mr. Rogow performed many roles at New York’s Folksbiene Theater. Rogow began working at the YIVO Institute for Jewish Research in 1972. Prior to that, he was a staff member of the Great Dictionary of the Yiddish Language and the Managing Editor of “YIVO Bleter.”

Here you can listen to a wonderful recording of Rogow reading a monologue from Sholem Aleichem’s “train Stories.”