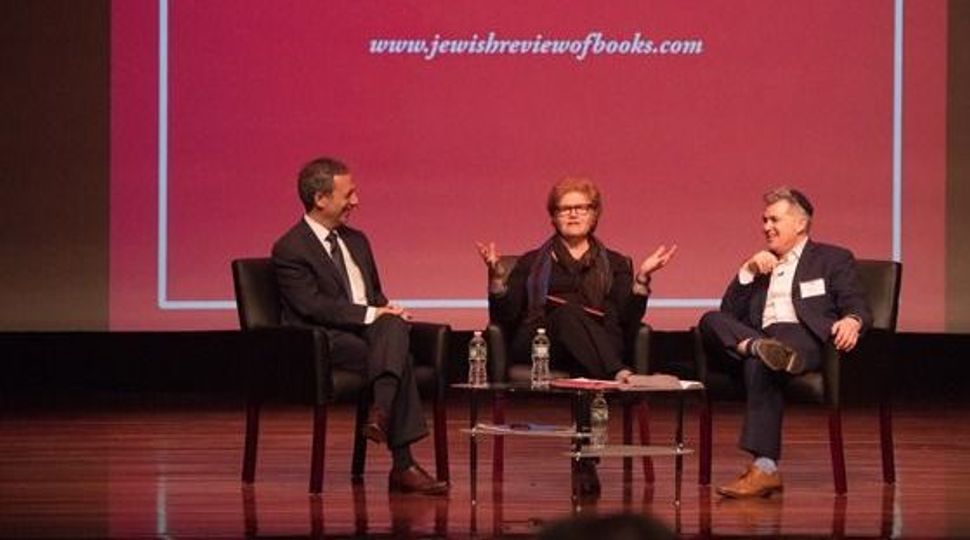 Peter Berkowitz, Deborah Lipstadt and Abraham Socher at the conference of the Jewish Review of Books. Image by Don Pollard

As midrash has it, the righteous spend eternity in heaven studying Torah. On January 14, the Jewish Review of Books brought a little piece of comparable heaven to Manhattan’s Museum of Jewish Heritage, featuring seven influential Jewish thinkers at its Third Annual Conference.

Abraham Socher, the magazine’s founding editor, promised a day of “arguments that matter.” The speakers did not disappoint. (If you missed the event, the Tikvah Fund, which sponsored the conference, announced upcoming talks similar in tone and style to the conference: On February 12, Michael Doran will speak on “The Nixon and Ford administrations and their relationship with the State of Israel,” and on March 5, Rabbi Meir Soloveichik will discuss on “The Haggadah: A Political Classic.”)

Read on for a recap of speaker comments at the event, which drew around 200 attendees.

Wisse read from “Mendele Mokher Seforim, or How to Criticize Fellow Jews,” a paper scheduled for an upcoming issue of the magazine. Citing three of Seforim’s novels — “Dos Kleyne Mentshele” (“The Parasite”), “Di Kliatshe” (“The Nag”) and “Fishke Der Krumer” (“Fishke the Lame”) — Wisse likened the first Yiddish novelist to Daniel Defoe. Like Defoe, Mendele satirized the foibles of his people against a somewhat muted backdrop of social and political forces. “He exposed the worst of Jewish life in the Pale of Settlement, going so far as to say that all Jewry is beggary,” Wisse said. Even respectful readers, Yiddish poet and memoirist Jacob Glatstein among them, rebuked Mendele for his harsh portrayals of the folk. “Mendele provoked the cognitive dissonance of the liberal Jew who cannot acknowledge the dark side of human nature,” Wisse said. Sadly, Wisse argued, not everyone could appreciate Mendele’s psychosocial critiques, especially after the Holocaust.

Socher moderated a discussion between Lipstadt and Berkowitz about Jews and the state of liberal arts on university campuses. Berkowitz asserted that liberal education is in “bad shape,” especially in regard to issues of free speech and due process. “Instead of airing liberal and conservative ideas, the university is hostile to minority opinion,” Berkowitz said. “Jews have a vital interest in restoring liberal education as the platform for a public body of knowledge” that people across the political spectrum can evaluate.

Lipstadt took issue with Berkowitz’s “nostalgia for an earlier time of open ideas on campus,” noting that universities pre-1960 were often not hospitable to women. She also distinguished between the founders of the Boycott, Divestment and Sanctions (BDS) movement and the earnest but “hoodwinked” students who seek to end the oppression of the Palestinians. “Make no mistake, BDS is the McCarthyism of the left,” she said. “But repeating the mantra that the campus is a hotbed of anti-Semitism doesn’t help.”

Speaking at the conference’s roast chicken lunch, Gordis considered the “chasm” between American and Israeli Jews. “It’s a fraught relationship,” he said, “and it always has been.” He described American and Israeli Jewry as “two radically different bets on securing the Jewish future,” with American Jews seeing themselves as members of a religion, and Israelis — like the Israelites in the Torah — seeing themselves as a nation. “European Jews began their immigration to Palestine and America in the 1880s, and in that time our fundamental sense of who Jews are is totally changed,” Gordis said. “We were never meant to be the same, and the question ought to be, ‘What does each Jewish community offer each other?’”

Jeffrey Rosen, Professor of Law at George Washington University Law School and president and CEO of the National Constitution Center

Author of “Louis D. Brandeis: American Prophet,” Rosen spoke about Brandeis, the first Jew named to the Supreme Court, as an unlikely but influential proponent of Zionism, especially during the administration of President Woodrow Wilson. A scourge of monopolistic businesses and a champion of the First and Fourth Amendments, Brandeis saw Zionism as a paradoxical safeguard for American Jews. “Brandeis believed Zionism would preserve the ‘priestly’ culture of European Jews, while securing the role of ‘good citizen’ for American Jews,” Rosen said. A supporter of the Balfour Declaration, Brandeis also persuaded President Wilson to support a national homeland for the Jewish people in Palestine.

In a question and answer session, Yadlin and Abrams asked each other to comment on the greatest security challenges facing Israel. Yadlin cited Iran as Israel’s “number one security threat,” noting that President Obama’s Iran deal, intended to bring transparency to Iran’s nuclear activities, looked right in the short run, but that Israeli prime minister Netanyahu’s skepticism about the deal was right in the long run. “The main problem — Iran’s hegemonic ambitions in the region and its hostility toward Israel — is merely postponed,” Yadlin said.

About the Israeli-Palestinian conflict, both speakers agreed that the Palestinians have no strategy today. “Thirty years ago, the Arab states told the Palestinians, ‘Hold out! Fight Israel!’” Abrams said. “Like Israel, however, Arab states such as Saudi Arabia and Egypt, have come to see Iran as the chief existential threat to their own regimes. Indeed, they have responded to President Trump’s endorsement of Jerusalem as Israel’s capital with silence.”

A question from the audience about Iran’s “perplexing” hatred for Israel prompted a passionate response from Yadlin: “Iran has a pure ideological hatred toward Israel. We learned the lesson from Hitler that when somebody says he wants to wipe you off the face of the earth, you take him seriously. Iran has the capability to do exactly what Hitler did.”

Barbara Finkelstein is a regular contributor to the Forverts. She is working on a book about mental illness and housing in the Bronx.