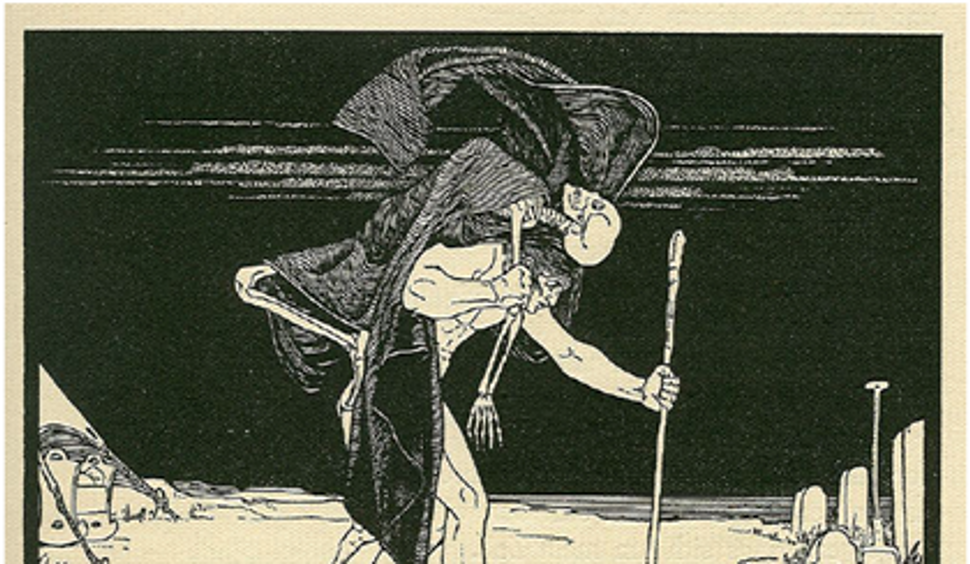 When I teach my course on Eastern-European Jewish culture at the University of Michigan, I always ask my students who graduated from Jewish day schools: “What were you taught about the world to come, ghosts, spirits and demons?”

I always receive the same reply: “Jews don’t believe in that stuff.” When I further ask if they’ve ever heard of the evil eye, dream interpretation, ritual hand washing and other “old wives tales”, some admit that they did, but only from their grandparents, not at school.

When Jews left the shtetls of Eastern Europe and came to America, they left their deceased relatives behind in the old country, both literally and figuratively. Most American Jews simply didn’t believe that the spirits of the dead could interfere in the affairs of the living. As such the American Reform and Conservative movements were cleansed of all manner of ghosts and other perceived superstitions. Nevertheless, Jewish ghosts, spirits and other beliefs in the supernatural have now found welcome sanctuary in academia.

Last month’s conference, “Jewish Ghosts: Haunting and the Haunted in Literature and Culture,” organized by Columbia University’s Institute for Israel and Jewish Studies and CUNY’s Graduate Center and appropriately scheduled on Halloween, explored the topic using psychoanalytic theory, as well as literary, historical and sociopolitical analysis. Professor Jonathan Boyarin (Cornell University) gave the plenary lecture on the topic, “The Jewish Dead in Literature and Lore.” His thesis: our dead continue to live as long as they remain in our memory. His lecture provoked a lively discussion with conference participants sharing their own experiences of seeing ghosts and departed loved ones appearing to them in dreams.

The chronological scope of the lectures covered the entirety of Jewish history from the times of Abraham to contemporary Israeli horror films. Speakers discussed the folklore of Jewish communities all over the world, especially those of pre-war Eastern Europe and contemporary Australia and the USA. There was, of course, much discussion of dybbuks, both as a psychological phenomenon resulting from a traumatic experience, and their role as a cultural symbol reflecting societal issues. The figure of the dybbuk is especially popular in Poland today, where it serves as a symbolic tool used in art, cinema and literature to deal with the heavy burden of guilt some Poles feel over the Holocaust.

The past returns to us in different forms and guises. Nostalgic memories and fantasies have always been an important aspect of Jewish culture and they occupy a key position in Jewish literature, theater and film. American Jews enjoy recalling the Lower East Side, where many newly arrived immigrants settled at the tail end of the 19th century. Today that neighborhood features as a popular backdrop for nostalgic Jewish musicals. Hasidim have their own nostalgia for the shtetls where their rebbes once lived. In the 1930s, the Lubavitcher rebbe, Yosef Yitzchok Schneersohn, published a series of memoirs about the shtetl of Lubavitch, which at that time was part of the USSR and therefore off limits to Hasidim. Upon settling in New York in the 1940 he continued the series in the daily Yiddish newspaper, Der Morgn-Zhurnal.

The conference brought together a number of young scholars who have been exploring Jewish history and culture through new thematic and methodological approaches. These researchers are finding new sources and reexamining the works of long-forgotten authors. One example is the Yiddish writer A. Almi who had a special interest in séances, once a popular pastime in Europe and the United States. Almi writes that even some Hasidic rabbis in Galicia participated in séances in an effort to communicate with the dead.

The conference far from exhausted the topic. None of the participants spoke about I. L. Peretz or Isaac Bashevis Singer, two central figures in Yiddish literature who wrote a great deal about the relationship between our world and the world to come. While the dybbuk in its various guises retains a prominent place in theater and film, many masterpieces like I. L. Peretz’s mystical play, “A Nigh in the Old Marketplace”, have been nearly forgotten, although the play was very popular in the 1920s among audiences of avant-garde Yiddish theaters.

Isaac Bashevis Singer remains popular among scholars of Jewish culture but he is mostly read in English, a language in which his works are often quite distinct from his original Yiddish texts. American editors, and perhaps Singer himself, “cleansed” his works of “other-worldly” details and plot points so as to better adapt them to the tastes of “enlightened” American readers. This is particularly apparent in Singer’s novels, Neshome eskpeditsyes (Soul Expeditions, released in English as Shosha) and Enemies, A Love Story. The motifs of nostalgia and trauma and relationships with the world to come are far more pronounced in the two novels’ original Yiddish versions than in their English translations.