So Where Does Hanukkah Gelt Come From Anyway? 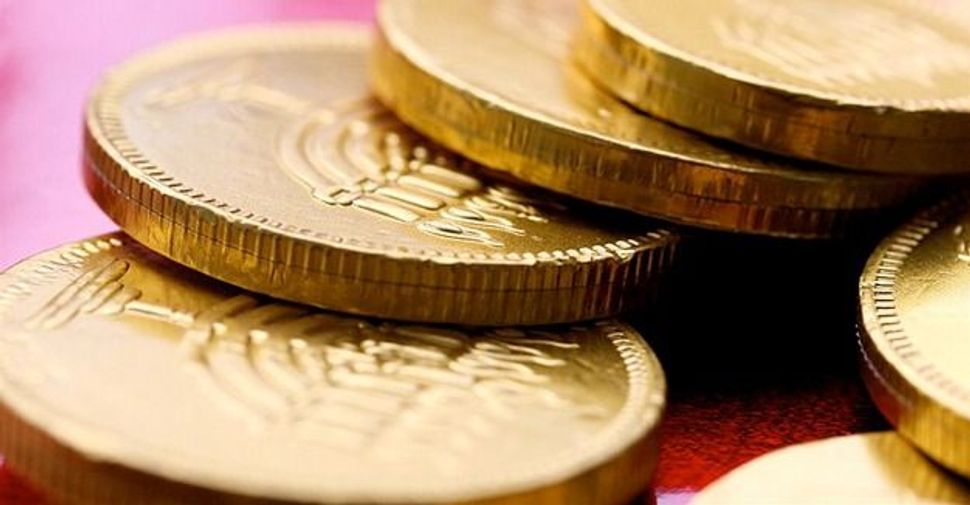 Like playing dreidel, the tradition of giving children money (Yiddish: gelt) on Hanukkah is not as old as you think. As Miriam Borden, a Yiddish instructor at Toronto University, wrote last year in the Forward, the tradition is at most several hundred years old. In fact, like playing dreidel, giving children money was originally more widely associated with Purim than Hanukkah.

Miriam’s article awakened my interest in the topic and I remembered that I have a unique scholarly work on my bookshelf that could provide more information on the history of Hanukkah gelt.

Isaac Rivkind, an exacting scholar and longtime head Hebraica librarian at the Jewish Theological Seminary, published numerous articles and dozens of books in Yiddish, English and Hebrew on Jewish history, folklore, philology and sociology. One of his special areas of interest was money. Rivkind was likely the world’s leading expert on the role of money (real and imaginary) in medieval Jewish society and published two landmark works on the topic in Yiddish that have, unfortunately, never appeared in English. The first explores the history of gambling and the Jewish community’s efforts to eliminate it during the Middle Ages. The second Jewish Money: In Customs, Cultural History and Folklore – A Lexicographic Study, published in 1959, is a massive volume, weighing in at more than three pounds, that dedicates pages to every obscure coin mentioned in Jewish religious texts and explores hundreds of folk customs related to money (burial taxes, dowries, amulets, coins handed out at circumcisions, etc). The book covers the entirety of history, from ancient Israel to the “Holocaust currencies” there were used in the larger ghettos such as Lodz. Rivkind’s Jewish Money is not arranged chronologically like a normal work of history. Rather, it is a lexicon with every entry listed alphabetically.

Looking up “Hanukkah gelt” I was surprised to find that the entry was relatively short when compared to articles describing folk customs that have been entirely forgotten in America. Rivkind begins his entry elliptically with this foreword: “Hanukkah: an ancient Holiday; Hanukkah gelt, a new tradition.”

Rivkind explains that although the exact origins of giving Hanukkah gelt have been lost to time, the tradition began with giving money to adults rather than children. The first references to Hanukkah gelt date back to the late 17th century, when money would be given to older yeshiva students to help tide them over through the winter. In the 18th century Hanukkah gelt was given as an informal tip to religious officials: preachers, beadles, ritual slaughterers and cantors. Later on, small-time Hasidic Rebbes without a court of their own would go from town to town begging for Hanukkah gelt.

It wasn’t until the industrial revolution reached the small towns and villages of Eastern Europe in the mid 19th century that Hanukkah gelt became associated with children. Although the tradition soon became well attested in Yiddish literature (see, for instance, Sholem Aleichem’s popular 1900 story “Hanukkah Gelt”), Rivkind believed from his study of Yiddish folksongs and idioms that the tradition of giving children money on Purim was in fact centuries older. In his article on Purim gelt Rivkind notes that the tradition of giving gifts on Purim and money to aid paupers (both Jewish and Christian/Muslim), goes back to the times of Rashi. Children began receiving Purim gelt in the Middle Ages, long before Hanukkah gelt first appeared.

As with the dreidel, all of the common explanations linking Hanukkah gelt to the events of the holiday are ex-post-facto. Although the Maccabees did mint coins shortly after defeating the Seleucid Empire, there is no evidence to indicate that anybody associated these ancient coins with Hanukkah gelt until the 20th century.

The transformation of Hanukkah gelt from coins into chocolate is an early 20th century American phenomenon, which will have to wait for another article.

So Where Does Hanukkah Gelt Come From Anyway?