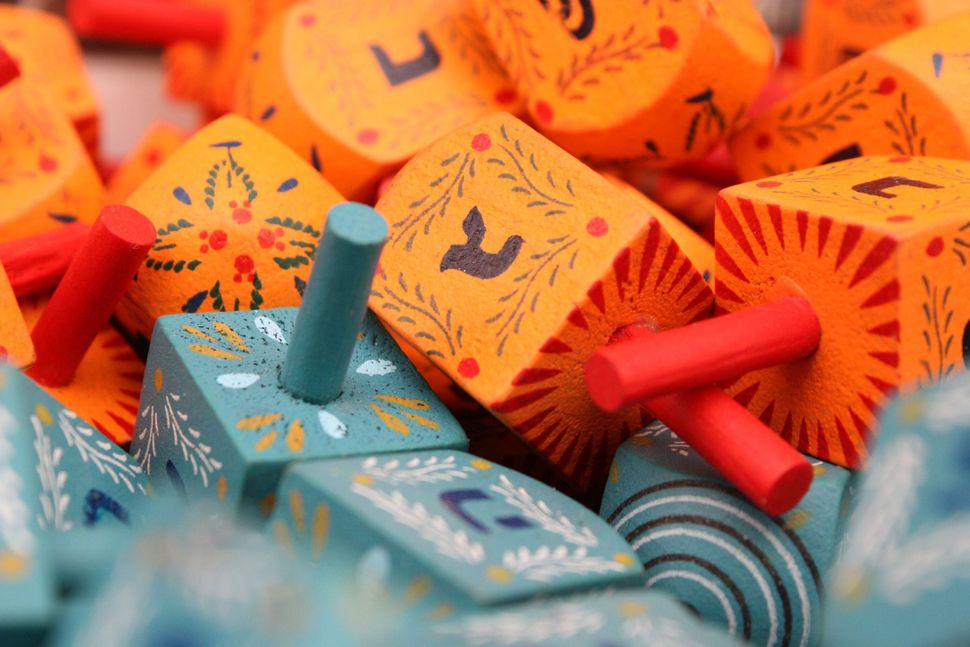 With the arrival of Hanukkah comes the reemergence of dreidels from closets, drawers and cupboards. These tops are a beloved part of the holiday — but where did they actually come from?

Like many things in Jewish history, the story that most of us heard about dreidels as children is entirely ahistorical. There were no dreidels in ancient times, and the tops were not used as a way to conceal Torah study from the Greeks. In fact, the dreidel originally had nothing to do with Hanukkah, or even with Jews, at all.

Although its exact origins are lost to history, a top that would later evolve into the dreidel was brought from Ireland (or perhaps England) to Germany during the late Roman period. Men would gamble with a top known as a “teetotum” in bars and inns. Originally the letters on the teetotum corresponded to the first letters of the Latin words for “nothing,” “half,” “everything” and “put in.”

In Germany the teetotum evolved into the “trendel,” and soon featured the German letters which corresponded to the game’s rules. When the Jews adopted the trendel they transliterated the letters into the Hebrew alphabet to represent Yiddish words: shin, for shtel arayn (put in); nun, for nit (not, i.e., nothing); gimmel, for gants (whole, i.e. everything); and hey, for halb (half). The letters were simply a mnemonic device to help players remember the rules and to determine who would gain or lose money after each spin.

The word trendel would eventually become dreidel (literally meaning “a little spinning thing”) in most Yiddish dialects, although other regional terms such as goyrl (destiny), and varfl (a little throw) would remain in wide use until the Holocaust.

When dreidels reached non-Yiddish-speaking Jewish communities, these Jews did not understand the meaning of the letters and began to seek explanations. Some felt that the four letters might correspond to the four ancient nations that tried to destroy Israel — Babylon, Persia, Greece and the Roman Empire. Others noticed that the value of the four letters according to gematria, Jewish numerology, was 358, the same as the value for the four letters in the Hebrew word Moshiach, or Messiah.

Neither explanation became as popular, however, as the explanation that the four letters were an abbreviation of the Hebrew words nes gadol haya sham (a great miracle happened there). This explanation didn’t become popular until after the game had begun to be associated with Hanukkah. The linkage of the four Hebrew letters on the top to the story of Hanukkah is apparently the origin of the legends about the dreidel being used to hide the study of Torah shortly before the Maccabean revolt.

After the emergence of the Zionist movement, the name of the dreidel was not only changed to sevivon in modern Hebrew (a word coined by Eliezer Ben-Yehuda’s son at the age of five) but the dreidel itself was altered. On most Israeli dreidels the shin has been replaced with the letter peh, so that the Hebrew abbreviation corresponds to nes gadol haya po (a great miracle happened here). Because of the change, the original Yiddish mnemonic device was disrupted. Meanwhile in America, where the dreidel usually retains its original shin, the Yiddish words that correspond to the letters on the top have been largely forgotten.