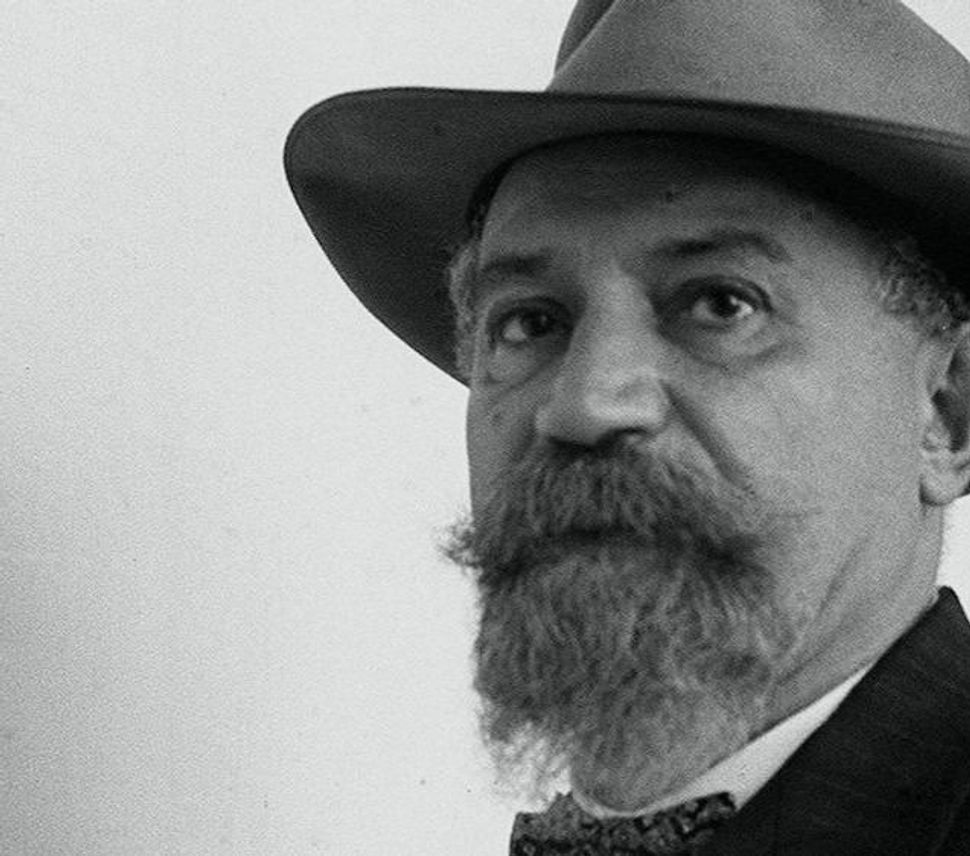 Among Yiddish literature’s many forgotten names, Zalman Shneour (1887-1959) has ranked among the greatest. During his lifetime, he was well-regarded for both his Hebrew poetry and his Yiddish prose. He studied under the influence of two literary giants, the Hebrew poet Haim Nachman Bialik and the Yiddish fiction writer Y. L. Peretz. Schneour’s Hebrew poems were published in 1906 and his “collected works” in Yiddish appeared in 1909, when he was just 22 years old.

Between the two world wars, Shneour was, together with Sholem Asch, the leading prose writer for the Forverts. He was unusually prolific: his works include two five-volume novels, “Ignoramuses” (also known under the title “Noah the Panther,” 1939); “Emperor and Rebbe” (1944-1952), and a number of smaller, yet also significant works. The two most famous are the story collections “Jews of Shklow” (1929) and “Uncle Zhome,” both of which can be read as novels. In the years since his death, however, Shneour has been all but forgotten.

For this reason, the new literary monograph by Israeli literature researcher Lilach Nethanel, Min ha’haim v’hamavet (“From Life and Death”), is a noteworthy achievement, as it considers Shneour’s bilingual literary legacy from the perspective of contemporary methodologies. The first part of the book is dedicated to Shneour’s literary beginning, when he earned a reputation as Bialik’s successor in the field of Hebrew verse. A significant conceptual and aesthetic turn in his work occurred during World War I. Shneour spent those years in Berlin, where the Germans detained him as a Russian citizen. There he wrote his famous Hebrew epic, “Vilna”, a sort of poetic reconstruction of bygone Jewish life that had already begun to vanish in the fog of war.

According to Nethanel, “Vilna” stands at the “cultural crossroads between east and west” in Shneour’s work. His earlier poems had reflected a westward cultural orientation. At that time Shneour had in mind to cultivate modern European poetics in the Hebrew context. But during his Berlin confinement, his gaze returned to Eastern Europe, where the old Jewish civilization was in the process of disappearing. Shneour creates a detailed landscape of bygone Vilna, where he had spent nearly two years between 1904 and 1906. This sober accumulation of detail would later become the signature style of Shneour’s Yiddish prose.

After World War I, Shneour undertakes an enormous creative project: to resurrect his hometown of Shklow through the power of memory and imagination. A fateful encounter for this achievement was his 1921 meeting with Ab Cahan, the founder of the Forverts, in Berlin. Generally speaking, the Yiddish and Hebrew writers of Berlin went in separate directions. Uri-Zvi Greenberg, for example, left for the Land of Israel and, because of his Hebrew-language commitments, would forsake Yiddish for many years.

Shneour decided to do just the opposite. He settled in Paris and quickly earned a new reputation through his depictions of pre-war Shklow. Nethanel confirms that this was under the guidance of Cahan, who had a good sense of his audience’s tastes. This particular theme was also popular for Hebrew readers in Palestine, but the new stream of avant-garde Hebrew poetry was foreign to Shneour.

Shneour had abandoned Shklow when he was thirteen or fourteen years old when he went off in search of the wider world. He had lived in Odessa, Vilna, Warsaw; later he studied in Switzerland, France, and Germany, and had visited the United States. He took refuge from the Holocaust in New York, and towards the end of his life, settled in Israel. In contrast to Cahan and other American Yiddish writers such as Sholem Asch, Joseph Opotashu, Borekh Glazman, and Peretz Hirschbein, Shneour never visited the Soviet Union. According to Nethanel, the reason for this was political, although it’s unclear whether Shneour was actually involved in anti-Soviet activities while he was living in Paris in the 1920s and 30s. Apparently, he simply had no interest in returning to his old homeland. For him, what remained paramount was to reflect his Shklow as a city that was no longer there, existing only in his creative memory. And this indeed was what distinguished him among his Yiddish and Hebrew readers.

In the second part of her study, Nethanel considers Bialik’s and Peretz’s influence on the young Shneour. In Peretz’s home, Shneour first met Sholem Asch and there the principal artistic distinctions between the two authors had already become apparent. Nethanel observes that Peretz preferred familiar Polish-inflected Yiddish writers, and treated “Litvak” writers such as Shneour coldly. The Polish Yiddish writers, among them Asch, had a tendency toward sentimental romanticism, while the Litvaks tended toward rationality and realism. This is, of course, a cultural stereotype, but the contrast allows one to better understand the difference between Asch and Shneour. Shneour’s sketches of Shklow are often ironic but entirely without sentimentality. Shenour, as opposed to Asch, never tried to aestheticize the Jewish life of the past; he preferred sober physicality over sentimental metaphysics.

Shneour dedicated more than 1,000 pages of his prose to Shklow. In the third part of her book, Nethanel analyzes the depiction of Shklow as a “literary landscape” in Shneour’s work, from “Jews of Shklow” to “Emperor and Rebbe.” His Shklow is a community that lives in the past, to which there is no return. As a literary production, this image was formulated in the multicultural Jewish-French-Russian environment of Paris between the World Wars. Nethanel takes into detailed account the influence of French literature on Shneour, in particular Emile Zola.

Russian literature was no less an influence on Shneour than the French. It would be worthwhile to continue researching his relationships with Russian émigré circles in Berlin and Paris in the 1920s and 30s. At home Shneour spoke Russian and he was certain to have read his Russian-language expatriate contemporaries. Through his friend Ze’ev Jabotinsky, Shneour would probably have been familiar with Mikhail Osorgin, the Russian writer whose novel, Sivtsev vrazhek (Sivtsev vrazhek is the name of a street in Moscow), a portrayal of the city in a bygone era, is similar in style and mood to Shneour’s sketches about Shklow. In 1912, Osorgin converted to Judaism in order to marry Rachel Ginsberg, the daughter of Ahad Ha”am. Although they later divorced, Osorgin remained close to the Russian-Jewish intelligentsia.

The Russian-Jewish journalist Solomon Poliakov-Litovtsev (who also wrote for the Forverts), had lived in Paris during that era and in 1943, to honor the fortieth anniversary of Shneour’s literary debut, wrote in the New York-based Russian New Journal: “Shneour brought ‘stiff-neckedness’ into Yiddish literature. He makes no excuses for his characters.” Poliakov-Litovtsev in particular appreciated Shneour’s “exacting” representation of nature, animals, and people. In his work Shneour created “a vibrant echo of a distant and long-ago spring.” European critics, who were distant from Yiddish culture, reacted positively to the translations of Shneour which appeared in the 1930s and 40s. The English critic R. Ellis Roberts even compared “Noah Panther” with the novels of Charles Dickens.