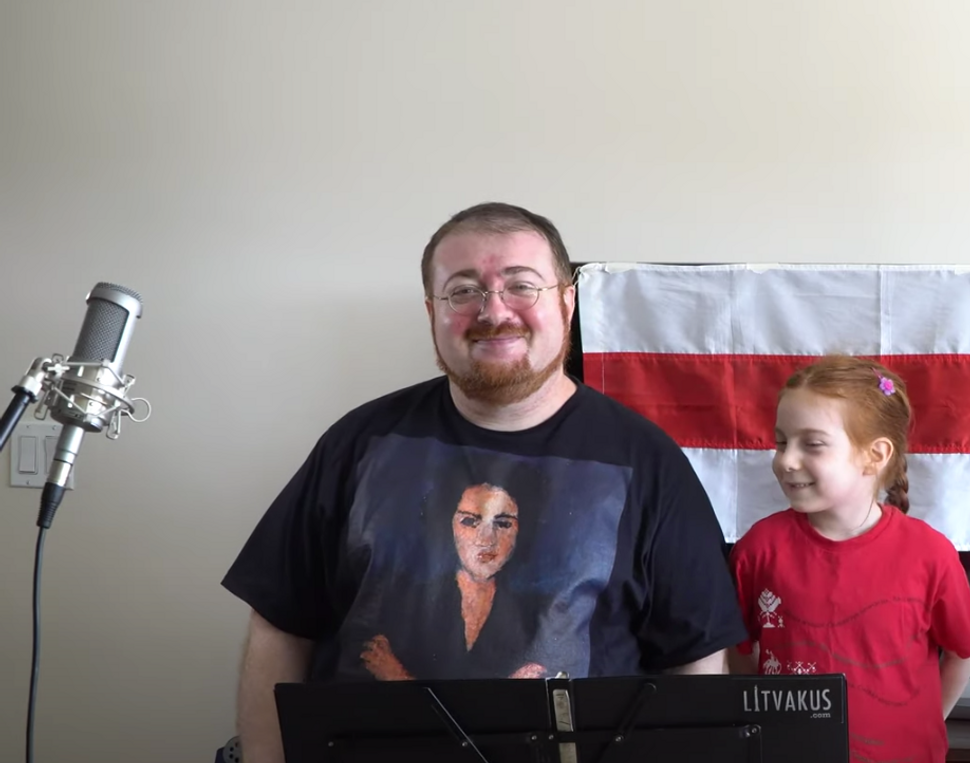 Despite the brutal suppression of their nascent pro-democracy movement, protesters continue to fill the streets of Minsk and other Belarusian cities, calling for an end to Alexander Lukashenko’s 26-year dictatorial reign.

While some Belarusians in New York are protesting in front of their homeland’s embassy, others in the diaspora are expressing their politics through art.

In the run-up to the most recent elections, the sixth since Lukashenko came to power in 1994, Dmitri Zisl Slepovitch, a leading figure in New York’s klezmer scene, who grew up in Minsk and immigrated to America in 2008, released a video in which he and his daughter Dinah perform Lavon Volski’s Belarusian-language protest song “I Was Born Here” in his own Yiddish translation. His wife Mariana accompanies the duo on the ukulele.

A composer, multi-instrumentalist and vocalist, Slepovitch arranged and co-directed the music for many Folksbiene productions, including the recent landmark run of Fiddler on the Roof in Yiddish. Slepovitch is also a renowned expert on the Jewish music of Belarus, whose ethnomusicological expeditions throughout the country serve as the basis for many of his compositions and artistic projects. A lover of languages, besides the Litvak Yiddish of his homeland, Slepovitch is also a patriot of the Belarusian language, which has suffered from decades of political repression under both the Soviets and the Lukashenko regime.

Writing on Facebook, Slepovitch noted that Belarus is not only his homeland but the ancestral homeland of many American Jews who wish to be able to visit the country without fear. By recording a Belarusian-language protest song in Yiddish, Slepovitch not only expresses solidarity with the pro-democracy movement but also hints at the long-intertwined history of the Yiddish and Belarusian languages. In fact, during the interwar period, Yiddish was an official language in Soviet Belarus along with Belarusian, Polish and Russian.

In October 1937, the two leading Yiddish poets in Belarus, Moyshe Kulbak and Izi Kharik, were executed on Stalin’s orders alongside more than 100 leading Belarusian-language writers and intellectuals. Slepovitch has set Kharik’s and Kulbak’s poetry to music and featured their work on his albums. Listening to his Yiddish take on Volksi’s protest song, the purging of Yiddish and Belarusian poets and intellectuals in the 1930s hovers like a specter over today’s scenes of brutal state repression in Minsk by an anachronistic dictator who models himself after Stalin.