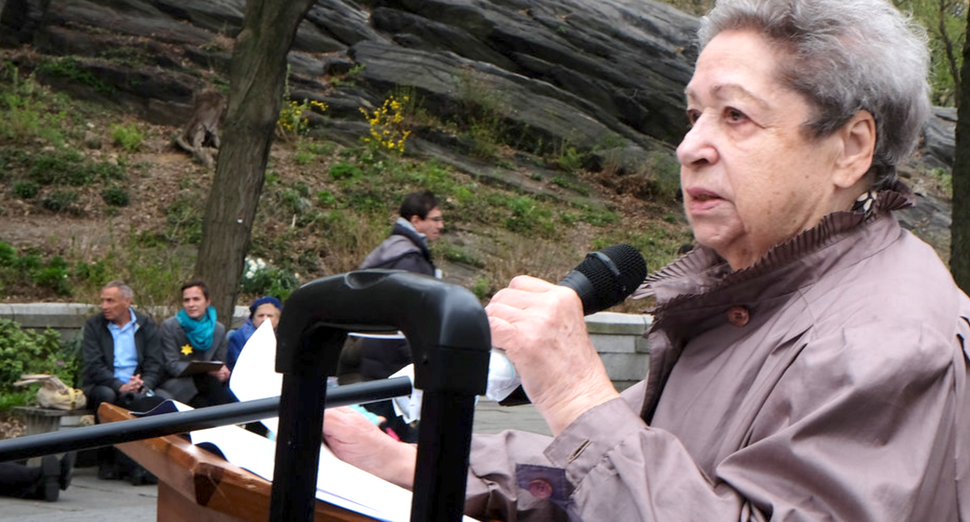 Chayele Porus Palevsky, a longtime stalwart of New York’s Yiddish cultural scene, who worked tirelessly to preserve the memory of Jewish Vilna, died on September 20, the second day of Rosh Hashanah. Palevsky, one of the very last surviving Jews to have fought among the partisans of Vilna, passed away at the River Garden Hebrew Home in Jacksonville, Florida, surrounded by her family.

Chayele Palevsky was born in Svintsyan (then Poland, now Lithuania), one of six children of Elye-Leyb and Malka Porus, an educated couple who spoke Russian and German. Although the family spoke only Yiddish at home, Chayele and her sister Rokhl were sent to a Polish-language school. Chayele’s fluent Polish and long blond locks probably played a part in helping her survive the Holocaust.

Chayele and her family were imprisoned in the Svintsyan ghetto, where she joined a partisan group and helped steal guns from the Germans. Just before the ghetto’s liquidation, she fell ill with typhus. The family was ordered onto a train that was supposedly bound for the Kovne ghetto. Although she had a high fever, Chayele made a fateful split-second decision to jump from the train after a fellow partisan had a feeling that something was suspicious. The two of them sneaked into the Vilna ghetto, where she learned that everyone on the train, including her parents, had been immediately executed at Ponar.

Chayele remained active in the underground movement in the Vilna ghetto. After the ghetto’s liquidation, she continued fighting in the surrounding forests in a partisan group that called itself “nekome” (revenge). In a 2014 interview with the Forverts Chayele describes how she served as a nurse and an ad hoc psychotherapist for her fellow fighters.

In 2019 the Museum of Jewish Heritage released a video about her experiences during the war.

After the war, Chayele married fellow partisan Simon Palevsky and settled in New York, where the couple ran a diamond store. They helped launch “Nusekh Vilne,” which organized cultural events and published a journal dedicated to keeping the memory of Jewish Vilna alive. They also helped to found the Workers’ Circle branch 349 and Camp Hemshekh to provide a summer camp for children of Holocaust survivors based on the principles of the Eastern-European Jewish workers party, The Bund, of which they were lifelong members.

They were active in a variety of other Yiddish cultural organizations and Chayele remained a regular presence at the monthly Yiddish lectures and concert series held at the Sholem Aleichem Cultural Center in the Bronx, not far from her apartment in the Amalgamated Houses, until she moved to Florida. Chayele was also often invited to speak at the yearly Bundist Holocaust memorial program on April 19th in Riverside Park.

“She was also a loyal reader of the Forverts,” said her son, Eliot Palevsky.

Just last year Chayele Palevsky was named one of the Forward 50.

Chayele leaves behind her sons Elliot and Moyshe, their wives Donna and Cheryl and her grandson Sholem. Due to the coronavirus, the family will conduct a private funeral but is planning to organize a public memorial once it’s safe to gather in large groups.

Donations in Chayele Palevsky’s memory can be made to the following institutions: YIVO, the Forverts, the Workers Circle and the River Garden Hebrew Home.