But it’s not only the name that’s been changed. The inner architecture and permanent exhibit have been completely revamped at a cost of $100 million.

When the museum first opened in 1978, it boasted what was then the latest in museum technology, including video and animation. I used to sneak out of my yeshiva and walk through the replica of the Arch of Titus, taking in the objects and exhibits that represented the various stages of Jewish exile: Babylonia, Spain, Germany, America etc. And I spent hours in the video library.

I also enjoyed its cool, darkened ambience, which protected me from the scorching Israeli heat outside. But more than anything, the Diaspora Museum helped me form a new inclusive cultural understanding of what it means to be Jewish outside of Israel and to recognize the history of the Jews as an integral part of world history in general.

But in the words of the poet, Abraham Sutzkever, everything in the world eventually gets old except childhood, and the exhibits of the Diaspora Museum eventually became outdated, leading the museum board to thoroughly renovate it.

Now, as I walked, masked, through its new iteration, I was struck by a major difference in focus. The previous museum explored Jewish family and community life in the Diaspora, but the underlying message was that eventually these Jews would (or at least, should) settle in the Jewish homeland.

In contrast, the new Anu Museum highlights the diversity of the Jewish people around the globe today: a New York hipster; a French-Moroccan activist; the first Hasidic judge, Rachel “Ruchie” Freier; a young father whose Jewish identity consists solely of speaking Hebrew, which is why he didn’t have his son circumcised, and a family of two fathers with a child. The message this time around is not that the ultimate destination of Diaspora Jews is Israel, but rather that wherever these Jews reside is home for them.

Portraits of distinguished figures in Jewish history are everywhere: Maimonides, Steven Spielberg and Nobel prize-winning neurologist Rita Levi-Montalcini. There are lively descriptions of the various Jewish languages, including Yiddish. In general, Yiddish is accorded more prestige than it had in the previous incarnation— perhaps, a sort of corrective for the Jewish state’s past discrimination against Yiddish. 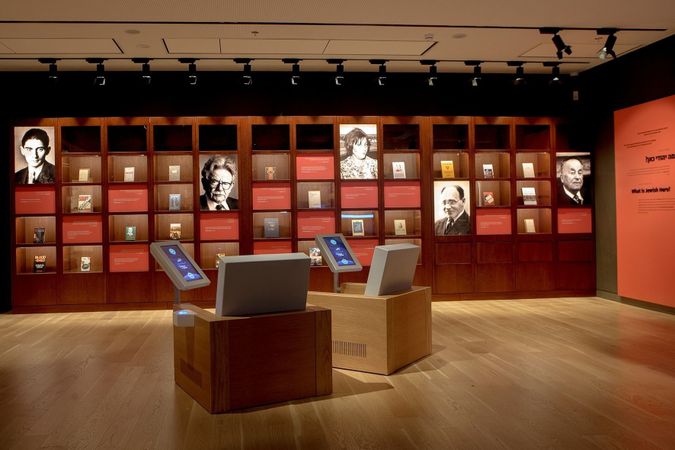 There are also other corrections, first and foremost — the important role of the Jewish woman throughout history. No less than 160 women are highlighted here, from Rebecca bat Meir Tiktiner, who authored tekhines [traditional, yet very personal prayers] to the Jewish Egyptian actress, Leila Mourad.

There’s a delightfully broad range of objects reflecting the creativity of the Jewish diaspora: original works by Jewish painters; a Torah scroll from Cochin, India; Leonard Cohen’s guitar; I. B. Singer’s typewriter; and the original costume and wig worn by the legendary artistic director of the Moscow State Jewish Theater, Solomon Mikhoels, in his memorable performance as King Lear. 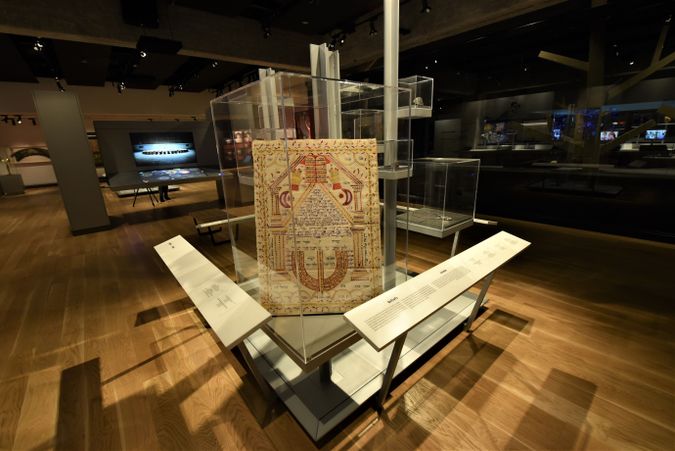 On the second floor you get to tour different communities around the world throughout Jewish history. The illustration of an East European Jewish shtetl is delightful, with signs in Yiddish (although, truth be told, I did notice a few spelling mistakes.) The new museum concentrates, for the most part, on the two major Jewish centers, Israel and the United States. All subtitles are in Hebrew and in English. Disappointingly, the original Yiddish texts aren’t provided at all.

I was also surprised to see very little mention of the Holocaust. In the previous museum, there was a huge monument with thousands of lights in memory of the six million. Now there’s just a small black room with one poem displayed, describing a young woman with green eyes and black braids who “was burnt by a German in Treblinka.”

Nevertheless, there’s a lot to admire here, like the large exhibit on Jewish humor ranging from Sholem Aleichem to Seinfeld, and impressive replicas of well-known synagogues around the world, including Frank Lloyd Wright’s “Beth Sholom” near Philadelphia and the Great Synagogue in Warsaw.

As I walked through the exhibits I was surprised to see so few visitors, considering how much there was to see. Hopefully, as people slowly return to their way of life pre-Covid, visiting museums like these will once again become the popular pastime it’s been in Israel since its founding.