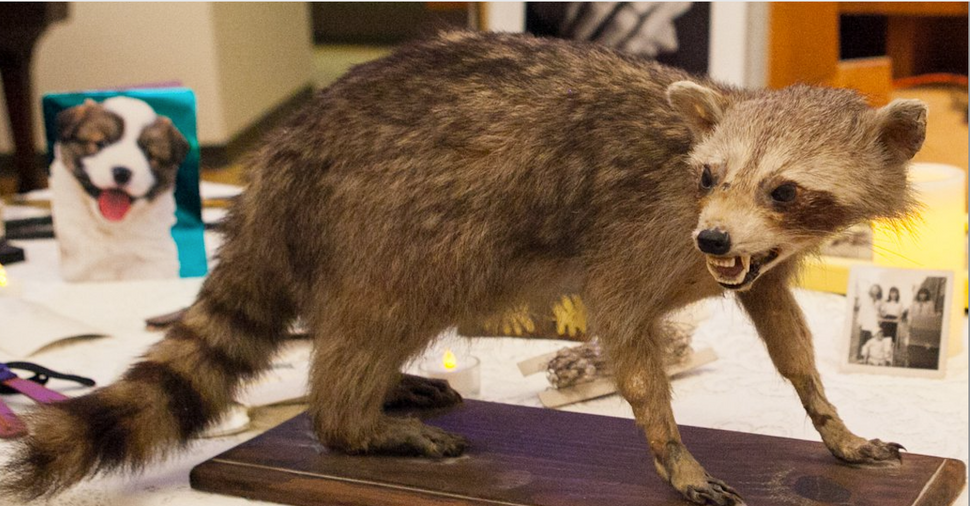 This story is part of the Forverts series, “Our Favorite Heirlooms.”

This stuffed raccoon belonged to my grandfather, Abraham Melezin, known to his close friends and family as Abrasha; I called him Papa.

A Holocaust survivor, Papa was born in Odessa and received a PhD in geography from Stefan Batory University in Vilna in the 1930s, the first Jew ever to do so. In 1948 he immigrated to the United States and began life here as a chicken farmer in Neshanic, New Jersey. Years later he taught in the economics department at City College in New York.

His second wife (and wife for most of his life) was Rokhl Pupko-Krinsky Melezin, a member of the Paper Brigade, the residents of the Vilna Ghetto who snuck a large cache of Jewish cultural items out of YIVO, before the Nazis could destroy or steal them.

At some point while he was still on the farm, he kept noticing a raccoon breaking into the chicken coop and killing the chickens. Finally, he decided to put a stop to it. He waited for him to come one night, shot him dead with his rifle and had him stuffed. The bullet hole is still visible near one eye.

I’m not the first in my family to guess that he did this in order to show that he was able to fight back, in contrast to the years during the Holocaust when he felt so powerless. He never said this, but it’s easy to draw that line.

After Papa passed away, the raccoon was one of the few mementos of his I wanted. I kept it on display for many years but during the pandemic I got a dog. As soon as she discovered the raccoon, she barked at him so much we had to hide it. He’s now in a closet, but I await the day when I can proudly display him once again.