Favorite Heirlooms: Photo of my great-grandmother

Courtesy of the Stern family

Below is an undated photograph of my maternal great-grandmother Sophie Udashen, her son Wolf and daughter Dinke. Her husband, my great-grandfather Avraham Zicherman, had been killed long before, probably in 1905, when he fell to his death while trying to flee from Czarist troops over a rooftop. 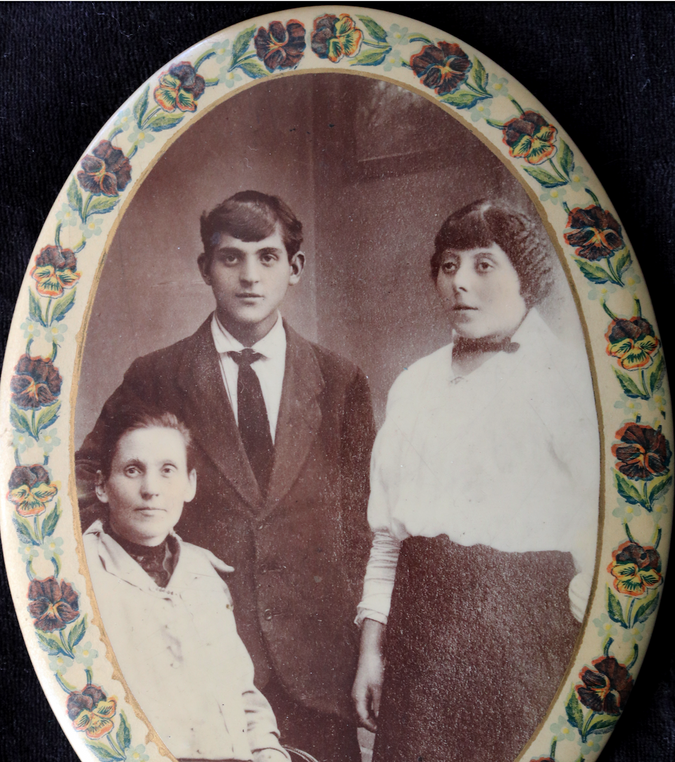 Their daughter Fanny, my grandmother, is not in the photograph because she had already emigrated to America in 1913 at age 17. The photo was taken in Vitebsk, where Fanny had lived until her emigration, and it was mounted on celluloid and a tin oval frame with a decorative pansy border. Sophie mailed it to her daughter in New York.

Although we don’t know the exact date of the photograph, 1913-14 is a good guess since Sophie died of starvation during World War I. We believe Wolf was killed in the Russian Revolution of 1917. Dinke, who probably lived in Vitebsk all her life, continued to write to my grandmother Fanny until she died in the 1950s after surviving both Nazi and Soviet persecution.

According to family lore, Sophie’s mother was a first cousin of Marc Chagall’s mother, Feige-Ita. They were certainly related in some way. Fanny remembered Chagall from her childhood, when the family would gather for Jewish holidays. She was nine years younger than he was, and did not think very highly of him. She was apparently hurt that he always ignored her at family gatherings. Unfortunately we don’t own any Chagall artworks or memorabilia, even though my brother and I are very interested in art history. (I work in the art history department at Brandeis.)

I treasure this photograph since it’s the only piece of evidence tying my family to Vitebsk and the Yiddish-speaking world it represents.

Favorite Heirlooms: Photo of my great-grandmother