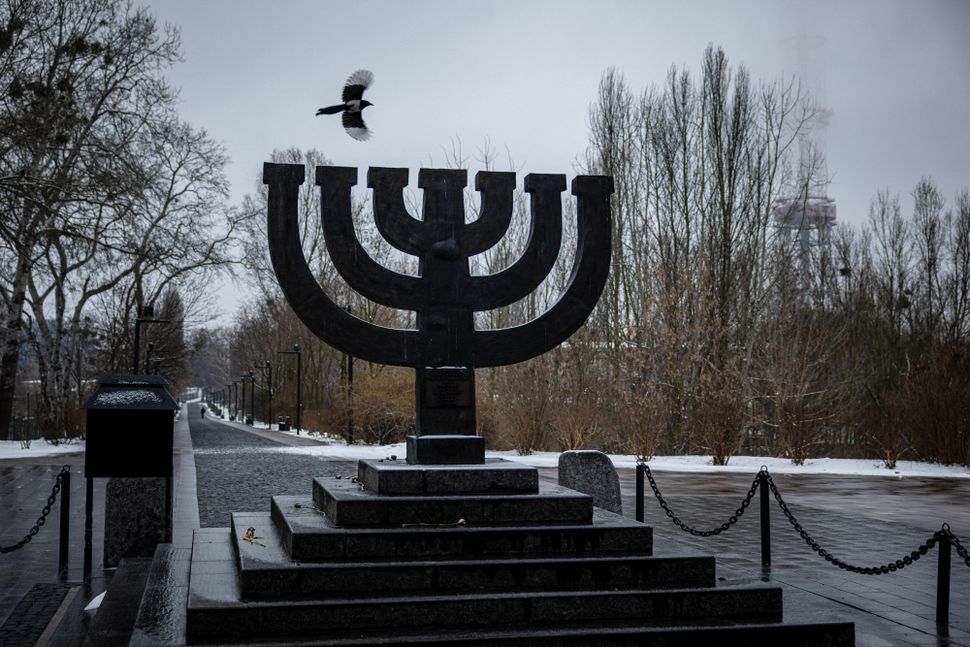 On March 1, 2022, artillery shells fired by the Russian Army in Ukraine fell in and near Babyn Yar (also known as Babi Yar), the Holocaust’s largest mass grave.

On September 29-30, 1941, led by the SS commanders, a large number of Einsatzgruppen, Wehrmacht and German police units as well as Ukrainian collaborators combined to slaughter 33,771 Jews in just two days. Intense killing at Babyn Yar, a ravine near Kyiv, continued until the Soviet Army liberated the area on November 6, 1943. A total of as many as 150,000 people were murdered there including Soviet POWs, communists, Romas and Ukrainian nationals. Before leaving the area, the Nazis made extensive efforts to conceal their genocidal crimes at Babyn Yar.

Once back in control of the ravine, Soviet policy, despite the trials of the Nazi commanders responsible for the mass killing, called for the continued concealment of what happened at Babyn Yar during World War II, particularly the mass murder of Jews. In 1961, the Russian poet, Yevgeny Yevtushenko, courageously challenged Moscow to recognize the Babyn Yar slaughter. The first line of his poem which stated “over Babyn Yar there are no monuments” also became the opening of Dmitri Shostakovich’s 13th symphony. However, the first monument to the Jewish victims of Babyn Yar was not set up until the 50th anniversary of the massacre in 1991 just before the dissolution of the Soviet Union. Today, a number of memorials stand at Babyn Yar commemorating martyrs of many traditions.

So why would Putin allow shells to be fired at Babyn Yar, a place of shared memories and universal horror? The answer is to be found in his obsessive and false justification for his criminal war to “denazify” Ukraine, a view not shared by the Russian people. Consistent with the old Soviet view that the communists were both the exclusive heroes and victims of Nazism, Putin is clearly comfortable with the idea of detaching Babyn Yar from its Ukrainian setting and “Russify” its symbolism. For Putin, there is no Ukraine, only Russia including Babyn Yar.

But that is only part of the story. The shelling of Babyn Yar, accidental or otherwise, is also personal for Putin. It’s no secret that the Russian leader wants to execute Ukraine’s Jewish President, Volodymr Zelensky, and decapitate his government. Zelensky has openly and repeatedly claimed his Jewish heritage and widely reported that he lost family members in the Holocaust. Putin wants no part of that narrative. Twisting and perverting the poetry of Yevtushenko, he wants Babyn Yar for Russia alone and to deny its place in the Jewish and Ukrainian traditions.

Moreover, Putin is making a statement to the Ukrainian Jewish community: “you don’t belong here. You have no claim to the monuments and graveyards of this Russian land. Leave, go to Israel, go anywhere but first reject your false claim to a synthesis with a Slavic land.” Ultimately, Putin is saying, that he would be fine if there was no Jewish monument at Babyn Yar or a Ukrainian marker. Smart bombs do not fall randomly at Babyn Yar anymore than Soviet policy concerning the Holocaust was random or unintentional. It’s almost impossible to believe that Putin would apologize for collateral damage or apologize for a military mistake at Babyn Yar.

I realize that the bombs that fell at Babyn Yar on March 1 destroyed materials things. The bombs that kill people, especially, children are worse. But the shells that fell at Babyn Yar this week also had nefarious purposes – to erase Jewish memory and to kill the possibility of a democratic, multi-ethnic Ukraine – even if hitting the mass grave and its markers were not primary targets.

Ukraine has a hard, complicated history with respect to its Jews and Russia. As a country, it has been trying heroically to forge a more hopeful future for all its citizens for the last twenty years. That’s why Putin did not blink when he learned that Babyn Yar was bombed. He detests that dream. I pray that the living and the spirits of the dead of Ukraine and will rise up and together defeat Mr. Putin and bring renewed hope to their blood-soaked land.

Dr. Lance J. Sussman is senior rabbi of Reform Congregation Keneseth Israel, Elkins Park, PA and a historian of the American Jewish experience. He recently published a retelling of the megillah, “The Purim Story”, and is working on a history of the Jews and the American Revolution.