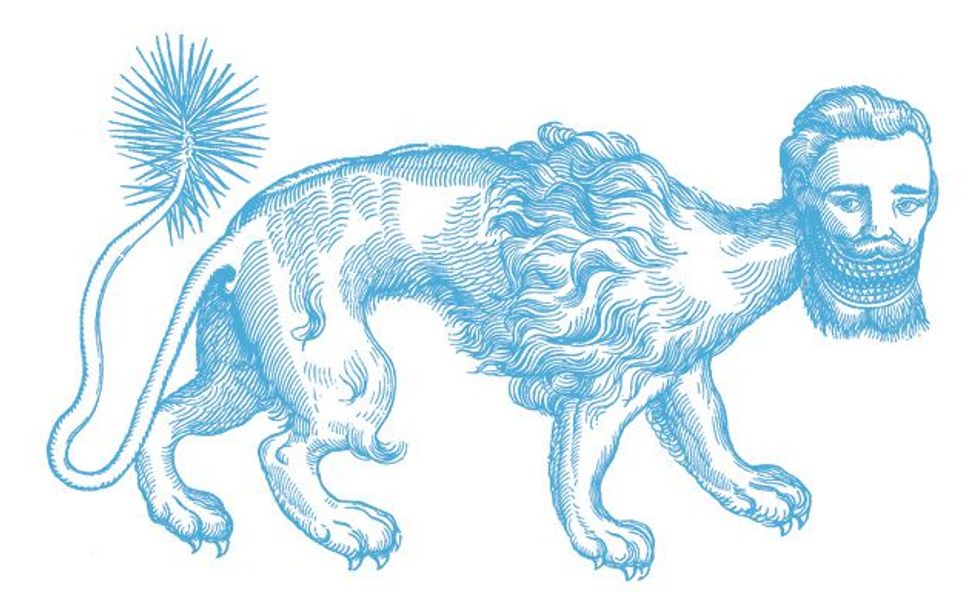 Toothsome: A Manticore, or man-eater, on the prowl. Image by JOHN COULTHART

For dungeon masters who have conquered real-world kashrut “The Kosher Guide to Imaginary Animals: The Evil Monkey Dialogues,” coming in early 2010 from Tachyon Publications, explores the possibilities of koshering fictional and fantastical creatures. Examining animals from a variety of world mythologies, married co-authors Ann and Jeff VanderMeer consider the unnatural history and edible properties of 34 potentially edible beasts (from the Abumi-Guchi to the Ziz).

Each entry describes the animal’s appearance: “According to Enoch, the Phoenix has the head of a crocodile and the feet of a lion.” Or, its origins and characteristics: “Taken from Brazilian folklore, the headless mule is a fire-spewing spectral quadruped with no head.” And then, as per the subtitle, each entry has a short, combative dialogue between the authors about whether Jews would be within their dietary rights to eat the said entry. The two writers — respected editors and authors of science fiction and fantasy books — adopt their characters: Evil Monkey, Jeff, wishes to eat everything; Ann represents the dietary superego.

Ann: No! And don’t even start. Because the mule itself, even if it weren’t fire-breathing, isn’t kosher. The fire doesn’t cleanse it.

The criticism that there aren’t enough recipes in this book is mitigated by drafting in Duff Goldman (star of the Food Network’s “Ace of Cakes”) to discuss the pros and cons of cooking Tribbles, testicles, Mongolian Death Worms and Wookiees. Although his bona fides as an authority on kashrut are in question (“Anything that’s served in a Chinese restaurant is kosher, even pork”), his culinary suggestions are delicious: “If you’re going to eat an angel, I’d eat a cherub…. Cherubs are the veal of the angelic world.”

Of course, once we colonize distant planets, these sorts of conversations will no longer be flights of fancy, but instead will be undertaken in earnest. Will Alpha Centauri Cucumber Fish be kosher? Will Betelgeuse Chicken Beetles be fleyshik (meat)? Until then, the VanderMeers’ discussions will remain dragon’s tongue in jackalope cheek.