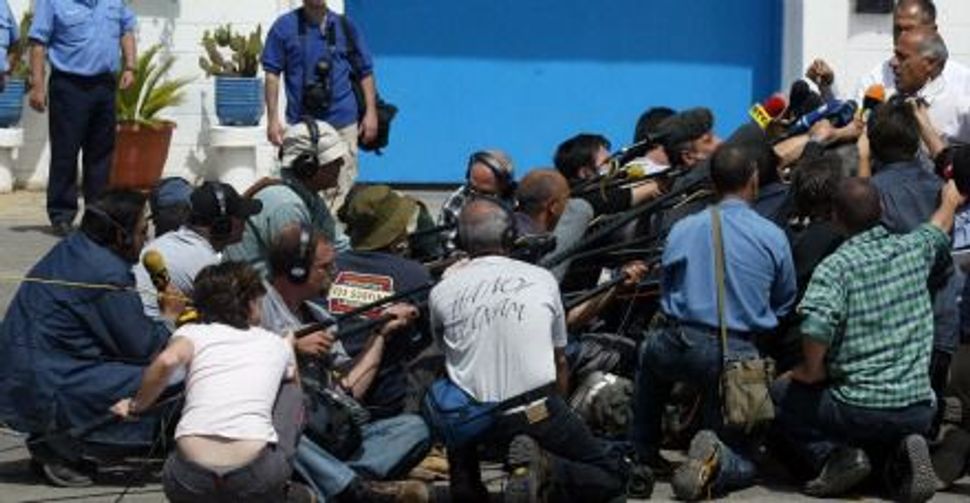 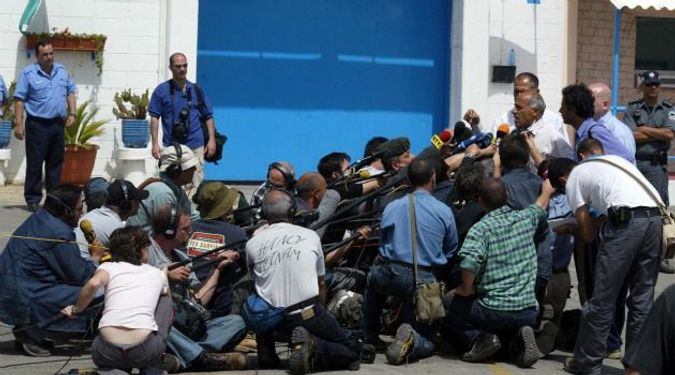 Free for Now: Israeli journalists, showed her interviewing nuclear scientist Mordechai Vanunu, have long boasted of the only truly free press in the Middle East. They worry that could be changing. Image by getty images

One of Israel’s proudest claims is that it boasts the only truly free press in the Middle East. But civil rights activists and journalists, including some of the country’s top names, say this could soon become a thing of the past.

On November 20, some 500 journalists from competing media outlets attended what was billed as an “emergency conference” in Tel Aviv to discuss what they deem unprecedented and immediate threats to their free expression.

The Tel Aviv conference, convened by an ad-hoc group of journalists, protested government-backed libel legislation that the journalists say could tie their hands and stymie investigative reporting. The Knesset bill passed its first reading by a vote of 42–31 the day after the conference. 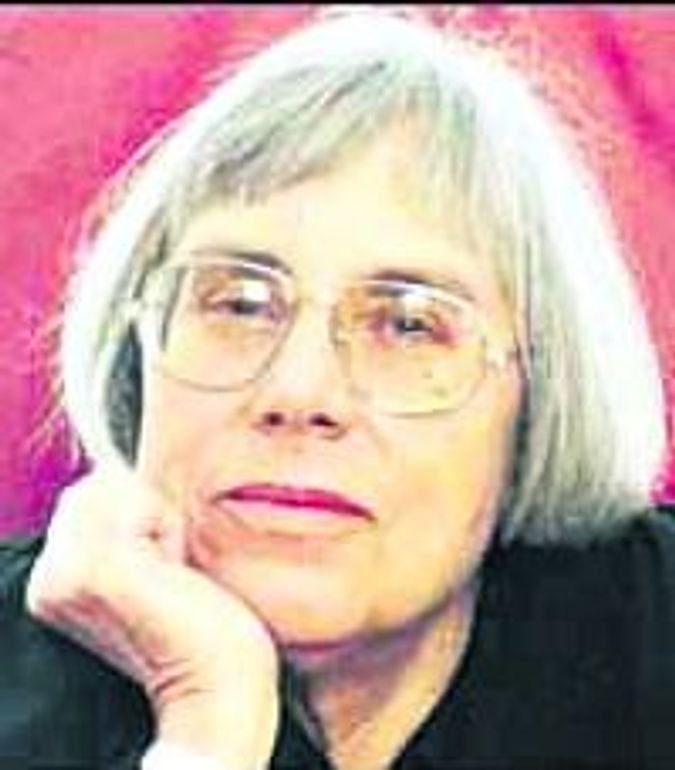 The conference also protested the government’s recent decision to take a long-established left-leaning Israeli-Palestinian radio station off the airwaves, and the looming closure of the fiercely investigative Channel 10 due to the government’s refusal to extend its debt repayment to the state by a year. The television station has aired several probing reports on Prime Minister Benjamin Netanyahu, who responded to one series of investigations last spring by serving the station with a $1.2 million lawsuit, which is ongoing.

These concerns come as the Ministry of Justice is also considering prosecuting Uri Blau, a journalist for the Israeli daily Haaretz, for publishing leaked military documents indicating that the army had assassinated two suspected Palestinian terrorists in possible violation of a Supreme Court order. Haaretz has argued that Blau was “doing nothing but his work as a journalist, and was acting according to the accepted norms in covering the defense establishment.” Critics warn that such a prosecution will make it harder to use leaks to expose wrongdoing.

“I think the Israeli media is still free, but I think we’re on the verge of a very big change for the worse,” said Eva Berger, dean of the School of Media Studies at the College of Management in Rishon Letzion. Berger is a former member of the Government Press Office advisory council.

Ben Caspit, a broadcast journalist and senior columnist with the daily newspaper Maariv, said he sees a “Putinization of Israel.”

“I never dreamed that I [would] see such things,” he said. “It’s happening live right now, and I don’t see any forces that can stop it.”

Bloggers, too, have been writing to express fury, saying that their expression is particularly endangered by the libel legislation the Knesset is considering. “Journalist Theodor Herzl must be turning in his grave,” blogger Shuki Galili wrote, referring to the liberal writer who founded modern Zionism.

The new law would allow successful libel plaintiffs to win maximum awards of $80,000 even if they cannot prove they suffered any actual harm. The sum represents a six-fold increase over the current maximum. In the event the media outlet in question did not offer the plaintiff the opportunity “to add his full response to the publication,” the damages can increase to $400,000.

This would begin an era of self-censorship and paralyze investigative reporting, according to former Supreme Court justice Dalia Dorner, who is now president of the Israel Press Council, the media’s ethical body. She told the Forward: “You can’t really [under the bill] write serious articles about our leaders and what they are doing; editors will say, ‘Why should I bother if I can get into such trouble?’”

Cyber-law attorney Jonathan Klinger, who represents some Israeli bloggers, said that the bill would badly affect people who report via new media, most of whom lack the financial resources of media organizations. “It will deter bloggers and will encourage people to write [only] under pseudonyms and other identities,” he predicted.

But Likud lawmaker Yariv Levin, an initiator of the bill, insisted that it “has nothing to do with press freedom, just to do with making the media check things and write the truth.”

“If people say we can’t afford to write the truth, they are giving the media a bad name,” said Levin.

Those protesting the bill maintain that in countries with a genuinely free press, professional diligence and fairness — not truth — constitute the criteria for defense against libel, ensuring robust discourse.

Critics of the legislation also view its requirement that media must allow the libeled party “to add his full response” as problematic. Running the full response of criticized parties in articles is not practical and goes against journalistic procedure, Dorner said. Some critics go further and say it will actually enable people to block negative press about them from ever appearing.

Television editor Haim Har-Zahav wrote on his blog: “All you have left to do is send a response of 40 pages. No media organization in the world will publish it… presto, you won a million and half shekels because the media did not meet the requirement of the law.”

According to Klinger, the requirement for responses “will actually kill the Internet.” This is because of the delay it will cause to articles and the space it will take up, especially in concise forms of new media like Tweets.

Levin replies that journalists and bloggers should be prepared to wait for responses — and said that impatience is actually one of his reasons for initiating the bill.

“With the rapid pace of the Internet people think, ‘Shall I wait [to check facts and obtain a response]’ — what can happen? In the end there was an incentive not to check things, not to do really serious work but to be the first to publish.”

Levin said that fears regarding the requirement to publish a “full response” were misplaced. It would mean a relevant response in proportion to the article length, “one where someone will be able to say what they want to say, not everything they send you.”

As the debate rages on over the libel law, journalists at two media channels were convinced that their woes, which officially resulted from their failure to comply with government procedures, were actually more political in nature.

Radio All for Peace has been broadcasting since 2004, believing that it did not need an Israeli license because its transmitter is in the West Bank city of Ramallah, which falls under Palestinian Authority control. But the station uses a Jerusalem studio. Citing this as their basis for action, police on November 17 ordered station manager Mossi Raz, a former Meretz lawmaker, to turn off the transmitter. With the exception of Arabic programs, which it continues to broadcast for Palestinian listeners, Radio All for Peace now streams only online.

Likud lawmaker Danny Danon told the Forward in an interview that the action came after he lobbied the Communications Ministry to shut down the station. It “promoted hatred and incitement against the Israel Defense Forces,” he claimed — though he said that in the end, its closure was unrelated to this and simply due to the fact that it had no license. Communications Ministry spokesman Yechiel Shabi told the Forward that the order to stop broadcasting “had nothing to do with politics.”

Raz is convinced that his transmitter was shut down to help silence voices critical of the country’s leadership and current political direction.

“It all comes from the same place,” he said, referring to his transmitter’s closure, the libel bill and the situation at TV Channel 10.

At Channel 10, management has told staff to expect closure in March. The station owes the state $115 million in license fees and $57 million in royalties, due by December 31. The Knesset’s Economic Affairs Committee rejected a proposal to allow it to defer payment, with Likud members voting unanimously against a reprieve. This has led to speculation in the Israeli media that there is a political motivation.

Channel 10 ran hard-hitting reports earlier this year, in which it claimed there were irregularities in Netanyahu’s travel expenses before he became prime minister in 2009. The station has also run reports critical of the government.