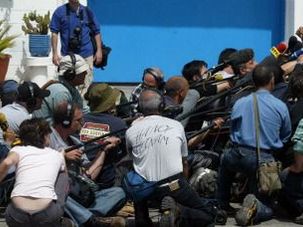 Israel proudly boasts of the only truly free press in the Middle East. Journalists fret that a new libel law and government restrictions signal a harsher era.

I’m still reeling from the news yesterday that the Knesset passed the anti-boycott law. It’s reassuring to know that it’s not just Israelis on the left that are outraged by this. In this morning’s Maariv, Ben Caspit, one of Israel’s most prominent and influential columnists, tears into the new law, expressing much anguish — you can read the original Hebrew or a translation. He is not, by any stretch, sympathetic to boycotts, which he calls “childish” and “fairly silly.” Caspit was in fact the first Israeli journalist to publicize the findings of the right-wing group Im Tirzu, which painted an ominous picture of the human rights NGOs operating in Israel. This is no knee-jerk leftie. He’s just shocked about what happened yesterday: