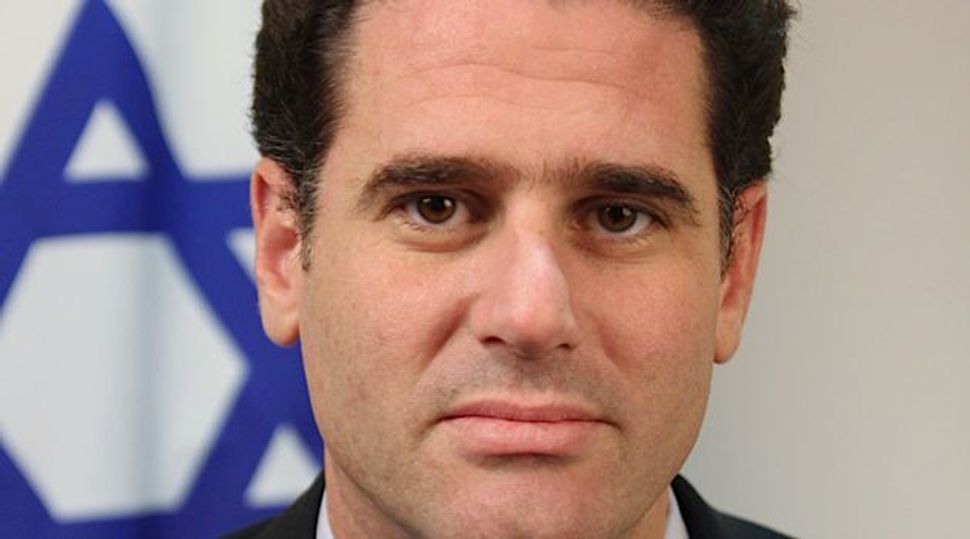 American Born: Ron Dermer renounced his U.S. citizenship to serve in Israel?s government. Image by Courtesy of the Embassy of israel

Ron Dermer really had to hit the ground running.

Before even getting a chance to unpack his bags and settle in, Israel’s new ambassador to the United States has been thrust into one of the toughest challenges an Israeli envoy can face: a major row between Jerusalem and Washington over Iran’s nuclear program, the issue that tops Israel’s priority list.

Dermer has spent his first two months in Washington shuttling between Capitol Hill and the White House to present Israel’s reservations about the deal being negotiated with Iran. In the short run, the effort had failed, as Dermer and Israeli officials were not able to stop Secretary of State John Kerry from signing an interim agreement they deemed as “bad for Israel” with his Iranian colleague Javad Zarif on Friday night. But in the next six months, as a final deal is negotiated, the new ambassador will have his hands full trying to defeat an agreement that would allow Iran to continue enriching uranium.

Advocating against the policy of a host country is a difficult task, even for seasoned diplomats. The challenge is all the more daunting for a newcomer who must express his country’s position while avoiding domestic political pitfalls.

For Dermer, however, that challenge is both easier and harder at the same time. On the one hand, his ability to work his way through domestic American politics will no doubt be aided by the fact that he is a native-born and raised American. On the other hand, he comes to Washington with the added baggage of close past ties to Republican circles that some view as partisan, and with perceived support for President Obama’s rivals.

So far, officials on both sides of the aisle say that Dermer has succeeded in avoiding this minefield, at least in his initial dealings on the Iranian issue.

Meeting with a group of lawmakers on November 20, Dermer made sure to praise President Obama’s support for Israel and his relationship with Netanyahu.

In the closed door meeting on Capitol Hill, the new ambassador spoke in favor of increasing sanctions on Iran, despite the White House’s call to avoid new legislation. At the same time he stated that despite differences between Jerusalem and Washington over Iran, relations are still strong.

“He’s a professional, and I’m sure he will do a professional job,” said Rep. Eliot Engel of New York, the ranking Democrat on the House Foreign Affairs Committee. “I’m not bothered at all about his political views.”

Engel, who has already met with Dermer, pointed to a key advantage the new ambassador has — his close ties with Prime Minister Benjamin Netanyahu, whom he has served as a senior advisor for several years. “He is one of those who has the prime minister’s trust and confidence,” Engel said.

In making the rounds on Capitol Hill, Dermer has been paying equal attention to both sides of the aisle. On November 19, even as a group of leading senators was at the White House discussing the Iran issue with Obama, Dermer sat down with Senate Majority Leader Harry Reid and presented him with a personal letter from Netanyahu. Dermer also gave Reid a copy of a book based on the letters of Yoni Netanyahu, the prime minister’s late brother, who was killed in the 1976 hostage rescue in Entebbe, Uganda.

Most of Dermer’s meetings in Washington are still described as introductory. But Israeli and American sources have confirmed that in these meetings, he is dealing primarily with Iran.

Dermer has yet to formally present his credentials to the president. Therefore, following protocol, he has refrained from giving interviews, including to the Forward. His official credentialing ceremony is scheduled for early December and will serve as Dermer’s first opportunity to meet with Obama since assuming the post. But it will not be his first visit to the Oval Office; Dermer has accompanied Netanyahu to all his meetings with Obama in past years, and sat in on the Israeli leader’s talks with other administration officials and lawmakers.

Dermer began serving as Israel’s ambassador to Washington on October 1, just as Netanyahu concluded a tense visit to Washington and the United Nations during which the Israeli leader warned against what he viewed as America’s enchantment with Iran’s new leader, Hassan Rowhani. Netanyahu cautioned the Americans against what he saw as their over-willingness to reach a compromise with Iran on the nuclear issue. The decades-long dispute centers on Iran’s nuclear program, which Tehran claims is for peaceful purposes, but which much of the world suspects is aimed toward the creation of nuclear weapons.

As international talks with Iran have gained momentum, so has the tension between the Netanyahu government and the Obama administration. Harsh words from Secretary of State John Kerry recently regarding Israel’s settlement policy have made the atmosphere even more toxic.

And then, there is one more task Dermer has had to deal with amid all this: finding a new home in Washington. The Foreign Ministry judged the current ambassadorial residence, which has served all Israeli representatives since the 1970s, when Yitzhak Rabin was ambassador, as in need of a major renovation and unsuitable for Dermer’s family of seven. The new ambassador currently lives in a rented home in the Maryland suburbs of Washington as the search continues for a new home that would also be in walking distance of an Orthodox synagogue. Dermer, who is traditionally observant, does not drive on the Sabbath.

The Israeli Embassy in Washington has also been operating for the past several months without a deputy chief of mission, an embassy’s traditional second in command. That post will be filled only in the coming weeks.

Dermer, 42, like his immediate predecessor, Michael Oren, was born and raised in the United States but renounced his citizenship in order to serve in senior positions in Israel’s government.

With English as his mother tongue, and an intimate knowledge of American politics (his father and brother were mayors of Miami Beach), Dermer operates with a cultural and political fluency that’s hard to match. His first meetings on Capitol Hill were with fellow Floridians, including Debbie Wasserman Schultz, chair of the Democratic National Committee, and Ileana Ros-Lehtinen, one of the most active House members on Middle East issues.

“I have known Miami Beach native Ron Dermer and his family for many years,” Ros-Lehtinen said in an email to the Forward. “I find Ron to be an exceptional individual who understands the political process in Washington and will help strengthen the U.S.-Israel bilateral relationship.”

Israel’s effort on the Hill to stop the interim deal with Iran and to increase sanctions pressure on Iran while negotiations continue has included several elements. As ambassador, Dermer has been in charge of daily contacts with members of Congress, both personally and through other embassy staff members.

Visiting Israeli officials, including Defense Minister Moshe Ya’alon, Minister of Intelligence and Strategic Affairs Yuval Steinitz and Economy Minister Naftali Bennett, have added their own input to the debate. And Netanyahu, in public speeches and private discussions, has set the impassioned public tone and framed the differences Israel and the United States have regarding the deal.

At the root of these differences, Israelis say, is Jerusalem’s insistence on preventing Iran from having any nuclear capability; Jerusalem has made a demand that Iran dismantle its nuclear enrichment capacity completely. Washington, however, is willing to settle for strict limits on that capacity and for stringent monitoring protocols so as to prevent Iran from using its facilities to develop nuclear weapons.

But much of Israel’s messaging, delivered by Dermer and other officials, has been seen as an attempt to challenge the information provided to lawmakers by the administration. In one instance, Steinitz told reporters that the sanctions relief offered to Iran would amount to $40 billion. The Obama administration strongly refuted this figure, arguing that it would be less than a quarter of this amount.

In another case, Mark Kirk, a Republican senator, confronted Kerry in a closed-door meeting with information he had received from Israeli officials earlier that day, disputing the administration’s claim that a deal would set back Iran’s nuclear program significantly. The exchange reportedly prompted Kerry to urge senators not to listen to the Israelis.

Dermer, according to Israeli sources in Jerusalem and Washington, intends to remain a close adviser to Netanyahu even when serving as ambassador. He accompanied Netanyahu during his visit to Washington in late September and has since attended two meetings the prime minister held with Kerry, one in Jerusalem and one in Rome.

The two consult frequently, and Dermer is viewed by the prime minister as his top adviser, albeit not an official one, on relations with the United States. This closeness could add to Dermer’s prestige in Israel and could lead, according to congressional sources, to greater appreciation of him in Washington, since he is known to have the ear of the Israeli leader. That makes him different from several of his predecessors, whom Israeli leaders bypassed to deal directly and personally with senior American officials.

Although the administration seems to have the upper hand in the battle over imposing new sanctions against Iran before the six month period of the interim agreement expires, the debate is far from finished. During the weekend, battle lines have been drawn in the Senate, as Democrats seemed poised to agree that new sanctions would only be rolled out if Iran fails to meet its obligations during the six month interim period, and Republicans pushing for immediate measures. In the long process still ahead, Dermer’s role as the key provider of Israel’s input on the debate is not expected to diminish.