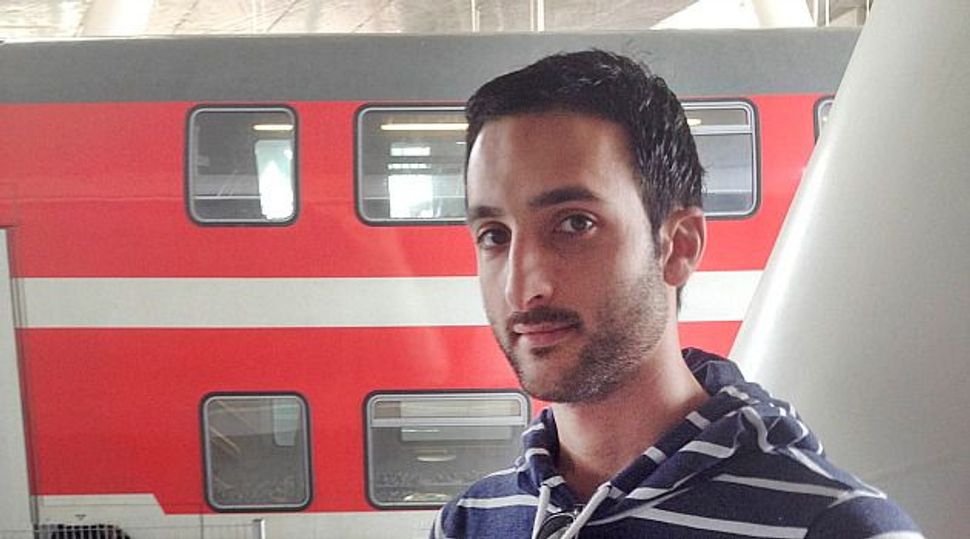 Missed the Train: Oren Trablesy regrets not buying a place in his hometown of Sderot when he had the chance several years ago. Now prices are shooting up beyond his reach. Image by nathan jeffay

A few years ago, someone who wanted to move to Sderot for “quiet” would have been dismissed as a lunatic. But Carole Arazi is serious.

She’s selling her home up in Tel Aviv, and is in the process of looking for one in this Israeli town, located less than a mile from Gaza. Yes, we are talking about the city famed for the thousands of rockets that have fallen here, shot from Gaza by Hamas and other radical Palestinian groups.

To many, the name Sderot is synonymous with misery. Its residents are brandished in the media as primary victims of Arab terror. It’s a must-stop on the itinerary of every visiting foreign politician seeking to show his or her solidarity with the Jewish state. Barack Obama, among many others, visited here during his 2008 presidential candidacy. Mitt Romney came in 2011, the year before he challenged Obama. On April 11, Ed Miliband, the British Labor Party’s opposition leader, was the latest to blow into town and voice his support during a five-day visit to Israel.

But today in Sderot, there is a building boom. Property values are rising. And after years of complaining about being disconnected from central Israel, the town is joining the Tel Aviv commuter belt.

“The quality of life possible in Sderot, where I can have a garden with a lemon tree, isn’t possible in Tel Aviv,” said Arazi, 52, who works in management. The sale of her gardenless Tel Aviv home in a tower block, she explained, will more than pay for a five bedroom standalone home in Sderot, where she expects to enjoy “quiet.”

As for the location, last December a railway station opened in Sderot, and trains to Tel Aviv take 58 minutes. Arazi said that it will actually be quicker for her to travel to her Tel Aviv office from Sderot than to undergo her current traffic-clogged journey on two buses within Tel Aviv.

After eight years of ongoing rocket fire, attacks on Sderot became relatively infrequent following the conflict in Gaza in 2008 and 2009. Nevertheless, the calm can be broken easily. There was a flare-up that saw rockets fall in or near Sderot in November 2012. And in mid-March of this year, Gaza militants launched 100 rockets, 70 of which reached Israel and one of which landed in Sderot. Residents of Sderot were listening for alarms and running to and from bomb shelters for much of the two-day period.

Such unpredictability has its effects. Shai Blau, a 21-year-old newcomer to the town, left quickly with her husband for Reut in central Israel, where she comes from, when the March outbreak occurred. She had moved to Sderot only reluctantly for two years so that her husband could study in yeshiva here. After the barrage, Blau related, she was left thinking, “I don’t know how people can bring up children in this.” Sderot native Nadia Leviev, 21, said that the flare-up reinforced her desire relocate “because it’s scary and hard here.” And Yaffa Malka, a 50-year-old hairdresser, said that Sderot residents are “like scared rabbits.”

But others view the flare-ups as few and far between, and simply take them in stride. “I have been here for three years, and each time there is an attack my heart sinks, but 10 minutes later I can go to the pub, drink a beer and forget all about it,” said Moran Bar-Nes, a 29-year-old student at Sapir College, which is just outside Sderot.

Three large building sites in Sderot, each of them with dozens of homes under construction, suggest that there are many who share this attitude. And the local municipality clearly believes that more are on their way: Its town plan envisages the number of homes here almost doubling, to 9,000 from 5,000, within 10 to 15 years.

But there’s no need to wait for these projects to be completed for confirmation that Sderot has become desirable; home seekers are already putting their money where their mouths are.

That contrasts with 2007, when Sderot was at its low point. Residents were leaving by the hundreds, house prices were at rock bottom and there was hardly a market. But March 18, when the Forward visited the local bureau of Re/Max, real estate agent Avichai Azulai walked to his window and pointed to a nearby apartment building, where two-bedroom homes were $20,000 in 2008. His company just sold one for $100,000 — cheap on the national scale, but a major jump for Sderot. And Bar-Nes, who chairs the student union at his college, reported that students are having a hard time finding rentals and making rent, which has almost tripled for some properties in the past four years.

The rises have left some Sderot residents frustrated that they didn’t see the good times coming. “In 2008 I was able to buy but I didn’t, and now I can’t,” said student Oren Trablesy, 26, who is married today and keen to stay in his hometown, but is still renting. Ranaan Shareb, a 33-year-old technician, said: “In the past I would have been able to buy two houses; now I need to work hard to get myself in a position to buy a one-bedroom apartment.”

Also buoying the Sderot market is the fact that thousands of homes have grown in size. The government has just finished building bomb shelters for all residents who didn’t have one. This involved building an extra room using state funds.

The migration and security calculus is also a mirror image of what existed in 2007. Back then, people left for the cities Ashkelon and Ashdod, a bit further north. Both trumped Sderot by having a train station and no rockets. Now Sderot has gained its own rail station and, thanks to the increasing skills of Palestinian rocket engineers, the other two cities have gained rockets.

“People think, ‘I’ll travel 15 minutes [more] on the train and have the same home for 30% cheaper,’” according to Azulai.

On the security front, many are reassured by the installation nearby of the Iron Dome missile defense system, which was introduced in 2011. Then, counter-intuitively, there is the increased military strength of the Hamas regime governing Gaza.

Sderot’s heyday as a target, from 2000 to 2008, was in part a product of the relatively limited nature of Hamas’s rocket arsenal then. But in recent years Hamas has steadily improved the range of its rockets to cover the major towns of Israel’s south, including Ashkelon, Ashdod and Beersheba. During a 2012 flare-up, one rocket reached clear to Rishon Le-Zion, near Tel Aviv. That leaves tiny Sderot as relative small potatoes.

“Ashkelon, Beersheba and Tel Aviv are bigger places where [terrorists] can make more noise,” said Shareb who returned to Sderot in 2011 after spending a decade living in Eilat, further south. In Sharab’s view, when Gaza militants want to keep things calm but deliver a measured message, Sderot may receive a smattering of rockets. When the militants want to escalate, they go for the larger targets.

One of the most surprising things when visiting Sderot is that the so-called Qassam generation — the young people whose education was disrupted by a never-ending flow of rockets and soldiers that went into Gaza — has grown up and is now among the town’s most optimistic residents.

“Give me a home in Tel Aviv and one here at the same price, and I would choose here,” said Itamar Kakun, 18. Kakun explained that he likes the intimacy of the community — which he believes was strengthened by the hardest years.

Kakun was one of the Sderot children whom the world pitied so much in 2006 that the Russian oligarch Arcadi Gaydamak was moved to take them on holiday to Eilat. Now Kakun reports, around 80% of his high school class want to make their homes there.

Rachamim Imuzi, a 39-year-old taxi driver, quipped, “If a person was worried five years ago, now that rockets are going to six other places as well as here, he only needs to worry one seventh as much.”